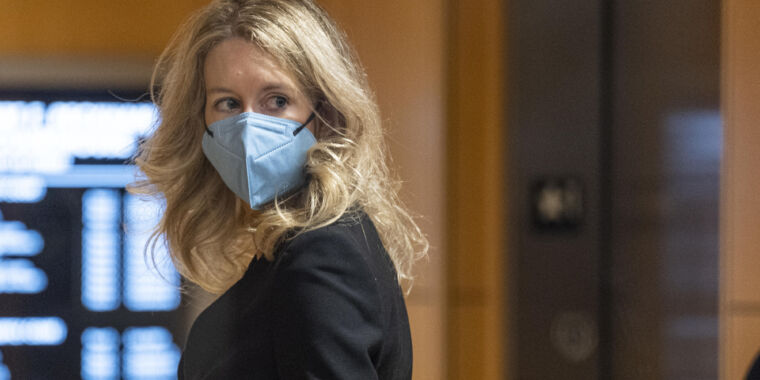 Elizabeth Holmes would like the jury to know that scientists, at Theranos and at other companies, led her astray.

One of those scientists was Ian Gibbons, who led Theranos’ scientific research efforts. In 2008, he sent her a presentation about the company’s latest technology, saying that the “performance design goals have been demonstrated,” that the “results have been excellent,” and that the company’s technology was in “clinical evaluation at several sites.”

Holmes told the court that she felt that meant the company was meeting its “design goals,” though she didn’t define what those goals were.

What did that slide mean, Downey asked Holmes. “We had successfully achieved the objectives of the program,” she said, an answer that neatly declines to specify those objectives. Were they to validate the technology? To receive the final payment on a contract? It wasn’t clear.

Weeks ago, the jury heard testimony from scientists at Pfizer and Schering-Plough, which was acquired by Merck, saying that neither company had validated Theranos’ technology. The jury also learned that the lack of validation didn’t stop Holmes from sending investors a Theranos-authored report with those companies’ logos placed prominently at the top.

In her testimony yesterday, Holmes maintained that she thought Schering-Plough, and later Merck, held positive views of Theranos’ technology based on a call with one of the company’s scientists.

To support that notion, defense attorneys showed an email from Holmes’ assistant summarizing a 2010 call with Constance Cullen, the Schering-Plough scientist who had been tasked with reviewing Theranos’ technology. The assistant said that Cullen told Holmes to “feel free” to use her name when contacting other Merck scientists. “All in all, it was awesome, I think,” Holmes’ assistant wrote. “Calling her every single morning for the last 3 weeks finally paid off…”

In previous testimony, Cullen said she was not impressed with Theranos’ technology and that she was swamped with work following Merck’s acquisition of Schering-Plough. One interpretation of the 2010 call could be that an overworked Cullen was just trying to get a persistent Holmes off her back.

In a moment of clarity, though, Holmes acknowledged that, while she had wanted to partner with the Department of Defense, Theranos never had a deal. Investors have testified that the company told them its devices were being used in the field by the military.

But other parts of Holmes' testimony suggest that she viewed nearly every development with rose-colored glasses. Though Pfizer had not validated Theranos’ technology, Holmes held out hope that a Pfizer executive’s call for “further interactions” would lead to a concrete deal, not just more meetings.

Holmes also said that she thought “our system was working well” after Gibbons sent her a report in 2008 that stated “assay results have been precise.”

What neither Holmes nor her attorney discussed was that precise results do not always mean a system is working well. A precise assay returns results that are close to each other. An accurate assay reports the true value, or at least close to it. A good test is both accurate and precise. Theranos’ “precise” assay results may have been technically impressive—the machines were returning the same value, time and again—but it doesn’t necessarily mean they were accurate. (Gibbons died by suicide in 2013 shortly before he was to give a deposition in a patent lawsuit involving Theranos.)

Holmes apparently felt that this product roadmap was solid evidence of her company’s technical capabilities, rather than a possible path to achieving them. “I understood that the four series could do any blood test,” she told the court.