Real Kashmir: Robertson on why he is returning to manage in the world's most militarised zone - 6 minutes read 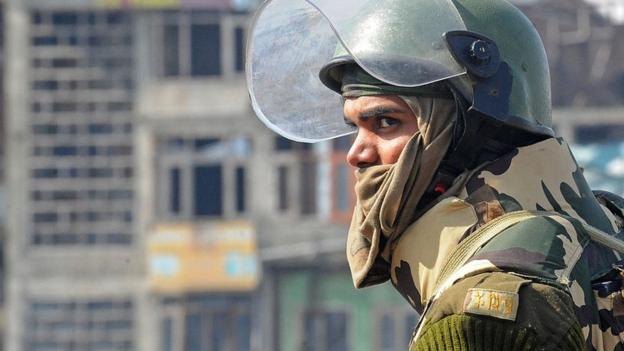 Real Kashmir: Robertson on why he is returning to manage in the world's most militarised zone

"We'll maybe wake up and get a text message - on the local network since WhatsApp gets shut down - that there's been a killing or a shooting causing a strike... so we can't train."

This is a snapshot of the "adventure" that will once again drop David Robertson into one of the world's most hostile environments, all in the name of football.

Killings, strikes, curfews and games cancelled due to suicide bomber attacks have become part of life for the former Aberdeen, Rangers and Leeds United full-back since being named Real Kashmir manager.

Based in the world's most militarised zone, the Aberdonian has transformed a three-year-old club with 500 supporters into an I-League side backed by 15,000 locals who live for the game.

Here, BBC Scotland speaks to Robertson about life in Kashmir, not living in fear, five-star compounds, fans hanging from floodlights and his Indian fairytale.

Robertson sits in his home in the north of Scotland, almost 4000 miles and a world away from the land he is already bracing himself for a return to. A land of barbed wire, automatic rifles and political tension.

In February, 40 Indian paramilitary police were killed by a bomb attack when a car full of explosives rammed a bus. In 2017, more than 100 civilians lost their lives in the region.

In a few months, the Scot will pack his kit bag, say goodbye to his wife Kym and head off with son Mason - who plays centre-back for Kashmir - to a war zone in pursuit of his "fairytale".

"We went to play against Minerva Punjab just after the Pulwama attack, and they refused to come and play," Robertson told BBC Scotland of a battle in February in which nine people were killed.

"It was a bit like the Estonia v Scotland game - it never happened. We had to line up, kick off and they didn't show up. And because of that, we had a rearranged game against East Bengal then it turned out they refused to come as well.

"The bizarre thing is, for people in Kashmir, it's a daily or weekly occurrence when people have been killed. It's like when there's snow here, in Aberdeen."I'm not saying you get caught up in it, but you become more relaxed. I never have once had any fear of it - where we are, we're a good bit away from it and protected a little bit. But you hear a lot of horror stories, maybe one of the players knows someone it's happened to."

When he returns, the 50-year-old will live in a "five-star hotel" owned by Real Kashmir's board, who have plans to turn the complex into a luxury compound for the Scot and his players.

"They've put a pool table in for the players. There's word they might be putting in a five-a-side head tennis facility just behind the hotel as well."

Robertson admits he did next to no research into Kashmir - a place the UK government advises against all travel to - before he accepted the job in 2017 over offers from China and Uganda."At the start, we used to change at the side of the pitch. We had players that wouldn't turn up for training because their bike had a puncture. The professionalism is getting stronger now," said Robertson."There's not a lot to do where we are - there's no fast food places, no movie theatres, no bowling alleys. They're probably the most passionate group in the whole of Indian football, and I think it's down to the fact that they don't have a lot.

The I-League season kicks off in October but already Robertson has started to form his plans for the forthcoming campaign.

While the man with six Scottish Premier Division titles, four Scottish Cups and four Scottish League Cups to his name has aspirations to return home and pursue life as a coach, his Kashmir love affair shows no signs of diminishing.

"I do miss home - there's only so many years or so much time I can continue doing what I'm doing but there's a lot to give up," he said."There's going to be a day when I don't want to go back or they don't want me back or I've just had enough, but at the moment it's enjoyable, it's fun."I'm the only coach they've ever had, and I think I'd find it very difficult to see someone else coach the team - it's an emotional attachment to the whole thing, the whole adventure."We have had a lot of challenges to overcome, and I'm proud of what the club has achieved. I would hate to turn my back on them."