A History of the Wolf - 10 minutes read 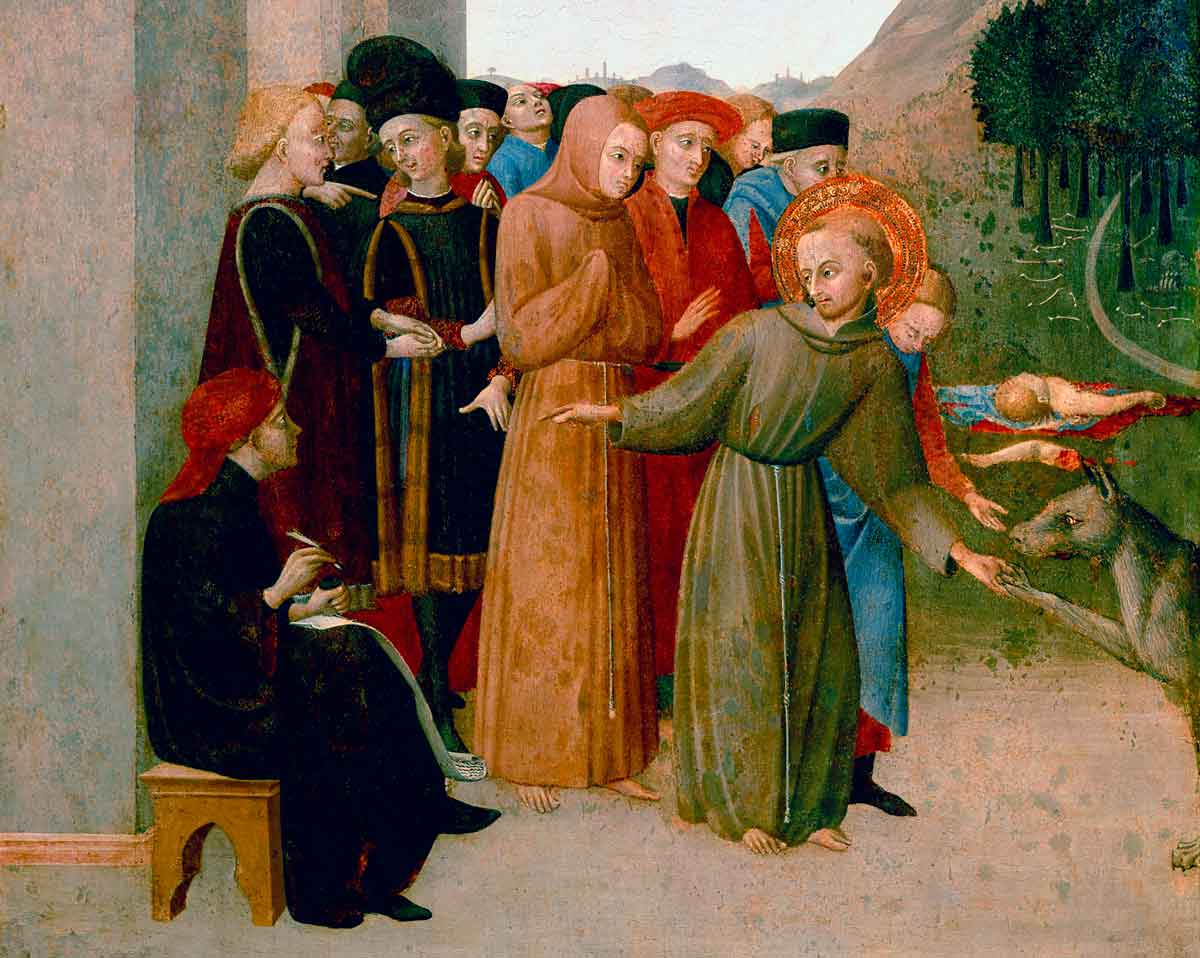 Wandering around the National Gallery recently, I was surprised by a wolf. Not a real wolf, but a painting of one – Sassetta’s The Wolf of Gubbio (1437-44). Originally part of a much larger altarpiece, this charming little panel depicts a scene from the life of St Francis of Assisi. Legend has it that, while St Francis was staying in Gubbio in 1220, the town was tormented by a ferocious wolf. At first, it contented itself with ravaging local livestock; but before long, it developed a taste for human flesh. No one dared open the gates, much less set foot outside. No one, that is, except St Francis. As he and a few trusty followers approached the beast’s lair, the wolf ran at him, its teeth bared. Calmly, Francis made the sign of the cross and ordered it to stop in the name of God. At this, the wolf grew quiet and, loping up to Francis, placed its head in his lap. Francis offered it a deal. If it would stop harassing the people of Gubbio, they would ensure that it was fed every day. The wolf offered its paw in agreement. Together, they returned to Gubbio to repeat all in front of a stunned populace and have their oaths drawn up by a notary.

What strikes me most about Sassetta’s depiction of this scene is the contrast between the relieved faces of the townsfolk and the calmness of the wolf. The point is, of course, to emphasise just how miraculous the whole thing was. But I can’t help feeling that there’s more to it than that. In comparison with the citizens’ exaggerated expressions, the wolf seems almost too calm. Although the grass in the background is still strewn with bones and body parts, it’s as if he’s a stranger to it all. If you didn’t know the story, you’d almost wonder whether the people might have got him wrong all along.

Sassetta’s wolf could be forgiven for feeling misunderstood. Since the earliest times, wolves have been the most maligned of creatures; and over the centuries, their reputation has only grown more unjust.

Hostility towards wolves began with the emergence of animal husbandry. They were natural enemies of the early herdsmen. Though wolves almost never attack humans, they prey on livestock, especially sheep. Guarding their flocks at night, shepherds would peer into the darkness, terrified that one of their sheep might be carried off. The slightest noise was enough to scare them. In the Georgics, Virgil described the horror that the wolf’s howl inspired, noting, with a shudder, that frightened, bleating lambs would only whet the hungry pack’s appetite.

Every effort was made to keep wolves at bay. The Roman agronomist, Columella, advised shepherds to keep their dogs in peak condition and to choose white, or light-coloured breeds for maximum visibility. In Longus’ Daphnis and Chloe, the villagers even dig pits in a vain attempt to catch a she-wolf that had been menacing their flocks. But none of these methods was infallible. A few animals from every herd would be lost – and from constant fear grew a gnawing enmity.

Wolves haunted the ancient imagination. Throughout the Mediterranean and the Near East, they were regarded as the most bestial of creatures; the antithesis of the civilised and good. For this reason, they were also seen as a metaphor for all that was least human in man, a mirror-image of humanity’s better nature. Those who threatened ordered society or transgressed accepted norms came to be caricatured as ‘wolf-like’; in time, the notion of a ‘wolf-man’ (or even ‘wolf-woman’) began appearing in literature. Though there was some variation between cultures, depictions of wolves – and early lycanthropes – tended to coalesce around a relatively stable set of characteristics.

Naturally, it was the supposed violence and cruelty of wolves which were uppermost in ancient minds. They were habitually portrayed as unreasoning and selfish, without any sense of mercy or justice. As such, wolves sometimes appeared in discussions of man’s capacity for irrational violence. Pindar, for example, used the image of the wolf to describe the hatred of an enemy for his foe. More often, however, ‘cruel’ wolves were held up as a symbol of tyranny. In Plato’s Republic, the protector who becomes a tyrant is said to be like a wolf who has tasted blood; and in Aesop’s Fables, the unjust wolf who refuses to listen when the lamb defends itself against his accusations is a parable of despotism. 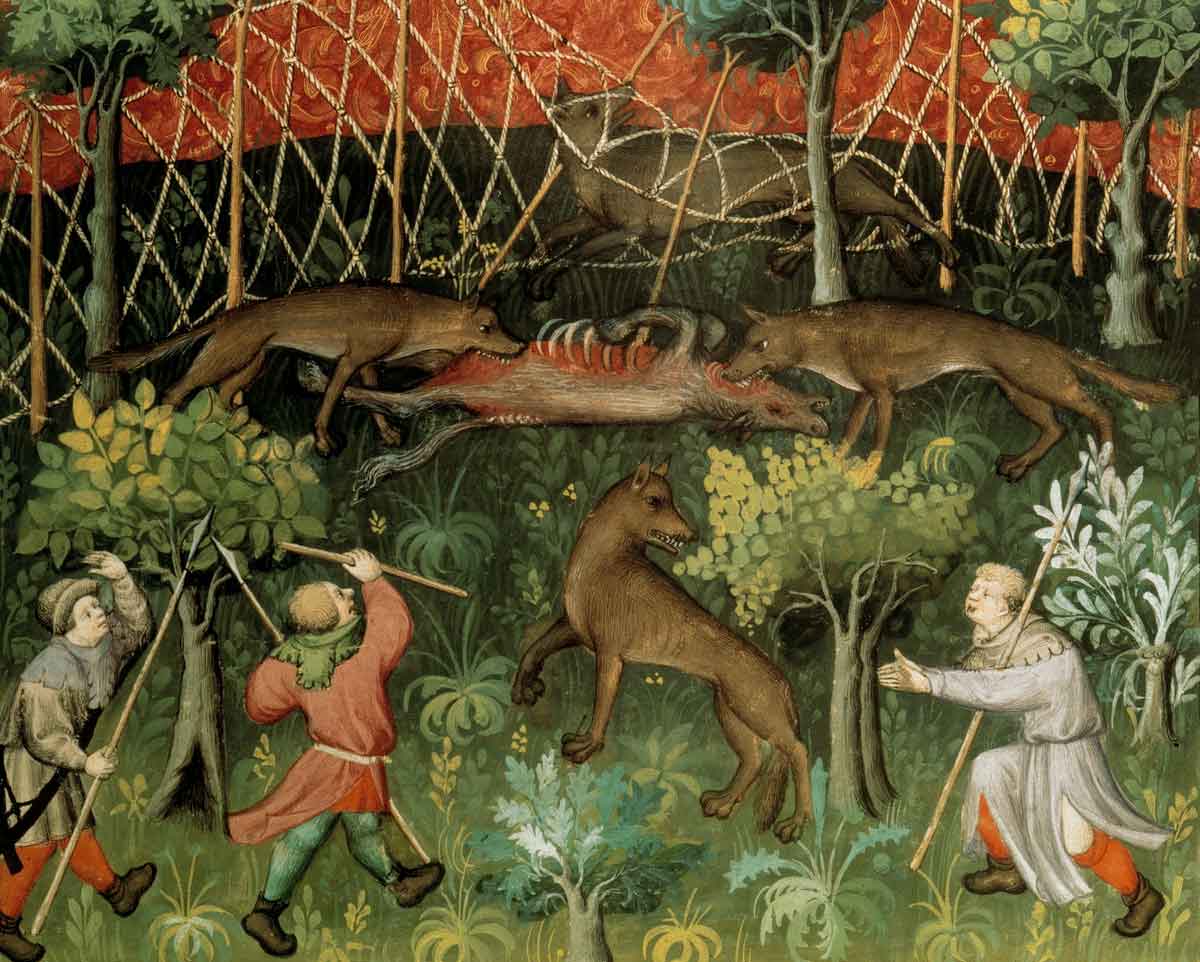 Given wolves’ intelligence and voracious appetite, they were also connected with cunning, deceit and a lack of moral restraint. In one Latin version of a common fable the wolf is clever enough to be taught to read; but is so obsessed with food that, when asked to name something beginning with ‘A’ immediately replies agnellum (‘lamb’). Applied to humans, this sharp-witted lack of moderation could often have sexual connotations, used to allegorise the consequences of lust in humans. In Daphnis and Chloe, for example, the cow-herder Dorcon disguises himself in a wolf-skin and hides in a bush, hoping to surprise Chloe while she is tending her flocks, only to be attacked by her dogs.

Sometimes, this could be extended to link wolves with women – or rather, with female sexuality. In the Epic of Gilgamesh the eponymous hero rejects Ishtar’s advances, on the grounds that she had turned many of her previous beaux into wolves; and, in Homer’s Odyssey, Odysseus finds that Circe has done the same. In each case, the implication is that female desire is somehow ‘bestial’ – and that it deprives men of their humanity, too.

Hostility did not exclude a certain admiration, though. Because wolves were so fearsome, ancient societies often viewed them as emblems of martial spirit – or even divine. For the Romans, they were sacred to Mars, the god of war. Every year a festival was held in their honour (the Lupercalia) and it was forbidden to hunt them. Several cultures even placed wolves at the centre of their foundation myths. These generally involve a curious transfer of characteristics from man to beast and vice versa. In most, fearsome she-wolves become nurturing mothers, while the human children they raise become fiercer and more wolf-like. The best-known example is the story of Romulus and Remus, who – after being abandoned by a servant sent to kill them – were suckled by the she-wolf Lupa. But there are plenty of others. According to legend, the infant Zoroaster was taken to the lair of a she-wolf by a devil in the hope that he would be eaten; but the wolf brought the child a ewe from which to feed, instead. So, too, the Turkic people claim descent from the she-wolf Arsena, who had ‘rescued’ a child from a village devastated by Chinese raids.

With the coming of Christianity, all balance was lost. In common with many other pastoral societies in the ancient Mediterranean, the Israelites had regarded wolves with hostility; but, like the Romans, they also found in lupine ferocity a model for the ideal warrior. In Genesis 49:27, for example, Benjamin is compared to a wolf, not for the sake of denigrating his humanity, but in order to emphasise the warlike character of his tribe. That was not all. They even saw something divine about the wolf’s lack of pity. In Jeremiah 5:6, for example, God’s retribution against sinners is compared to the fury of ravening wolves. And repeated prophesies that, one day, the wolf would dwell with the lamb (e.g. Isaiah 11:6) were not just a mark of God’s mercy, but also a sign that even wolves were not beyond saving.

All that changed with Christ’s incarnation. Though wolves were still seen to possess the same underlying characteristics – ferocity, cunning, a lack of moderation – they were deprived of any positive associations. Throughout the New Testament they were used as a symbol of all that was wicked in human nature and, most damningly, as a metaphor for the enemies of Christ himself. The apostles are sent out ‘as sheep in the midst of wolves’ (Matt. 10:16); false prophets are ‘ravenous wolves’ in ‘sheep’s clothing’ (Matt. 7:15); and those who persecute true believers are cast as ‘savage wolves’ (Acts 20:29).

This had a devastating effect. Now sanctified by Christian belief, the hostility which most ancient societies had felt for wolves began to crowd out the tolerance and admiration with which it had been mixed. Beginning in the Levant, wolf-hunts spread throughout the Mediterranean; and, after the conversion of Constantine, their popularity only grew. Surviving the fragmentation of the Roman Empire, they became common throughout Europe and, by the ninth century, killing wolves had come to be seen almost as a religious obligation, especially for the well-born. Though figures such as St Francis later preached kindness to animals, it did little to abate the trend. 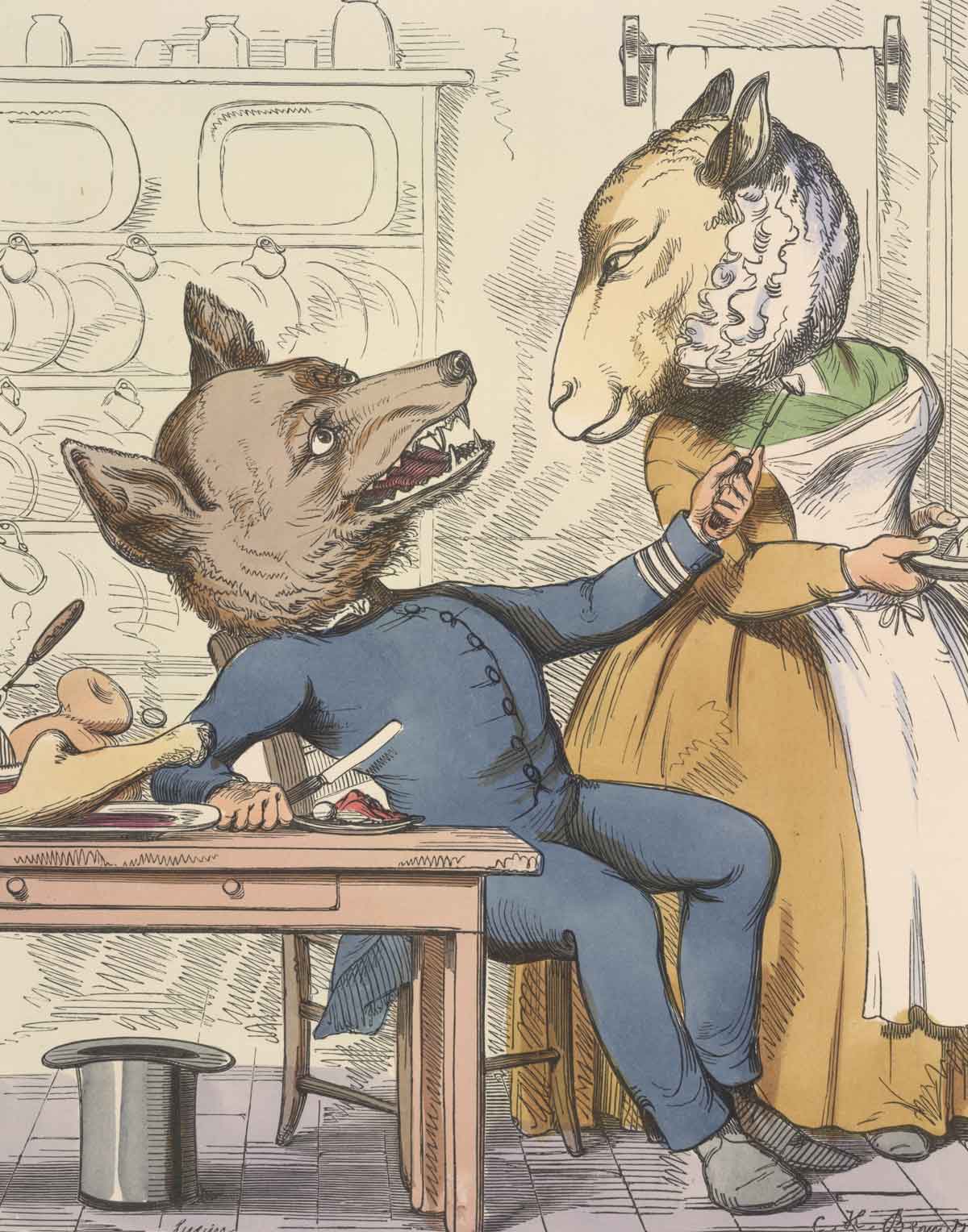 Wolf-hunts were especially prevalent in the British Isles. There was good reason for this. Partly because of the dense forests which covered most of the islands, the wolf population was unusually large; and, thanks to the preponderance of sheep farming, there was always more than enough for them to eat. Even so, the savagery with which wolves were hunted was extraordinary. As the Anglo-Saxon Chronicle reports, the hunting season was timed to coincide with the cubbing season in order to do the greatest harm to packs. From the tenth century onwards, kings often demanded wolf-skins or tongues as tribute. Later, Edward I ordered the eradication of all wolves in his realms and, by 1500, wolves were virtually extinct in Britain.

Elsewhere in Europe, the process took place much more slowly – but with the same result. Though wolves were still sufficiently common in Russia for Tolstoy to depict characters hunting them with borzois in War and Peace (1869), they were driven out of France, Germany, Italy, Spain and the Low Countries by the late 18th century.

The rarer wolves became, the stronger hostility grew. Across Europe, ludicrous tales came to be told of their viciousness, embroidered with fanciful flights of imagination, which often said more about humanity’s growing alienation from the natural world than about wolves themselves. Little by little, males took the place of she-wolves, and humans – rather than livestock – became their prey. The bodies strewn across the grass in Sassetta’s painting are a neat illustration of this; but the same trend is also evident in the story of the dog Gelert, who saved Llewelyn the Great’s son from a wolf, only to be killed by his master in error; in Charles Perrault’s retelling of Little Red Riding Hood (1697); and later, in Sergei Prokofiev’s Peter and the Wolf (1936). They also came to be associated with black magic and malign spirits. In the 15th and 16th centuries, they played a central role in the ‘witch craze’; during the 17th and 18th centuries, werewolf tropes reached their zenith; and in the 19th century, wolves often team up with vampires in gothic horror. Even today, irrational hatreds persist. Attempts to reintroduce wolves to England, France and Belgium have been met with visceral opposition.

But it doesn’t have to be this way – and, in a funny way, this brings me back to Sassetta’s painting. Most of us aren’t saints; but neither are wolves ravening beasts, baying for our blood. Provided we approach them with respect and allow them the opportunity to feed on things other than livestock, there is no reason why we cannot live together in harmony.

Alexander Lee is a fellow in the Centre for the Study of the Renaissance at the University of Warwick. His next book, Machiavelli: His Life and Times, will be published by Picador in March 2020.