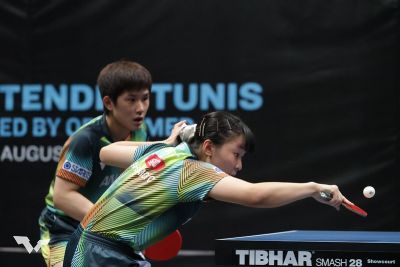 Calderano entered the event as the second seed and he played a nearly flawless tournament – winning 3-0, 3-0, 4-0, 4-1.  The tournament’s top seed, Tomokazu Harimoto fell early – losing to 18 year old French phenom Alexis Lebrun 3-0.  Lebrun’s run may have been the biggest story of the tournament, as the World’s No. 37 player continues to improve.

Some of the other big names in the tournament fell early as well – Lin Gaoyuan fell to Mattias Falck.  Mattias Falck topped Kristian Karlsson  early, but became a casualty to Lebrun 4-2 in the Semifinals.  The other Semifinalist was Jang Woojin, who fell 0-4 to Calderano.

The Women’s Singles event was full of surprises.  In fact, the winner entered the tournament as the 17th seed in the event, and the other Finalist was the 23rd seed.  That winner was Zhang Rui, a lesser known Chinese player who topped Miu Hirano (World No. 18) 3-2 in the Round of 16, and topped Fan Siqi (World No. 22) before beating Miyu Nagasaki in the Siemifinal.  The other Finalist was Miwa Harimoto, Japan’s 14 year old rising star (who is only World No. 66).  Like her brother a few years ago, Harimoto is already making waves on the Tour as a 14 year old and in this event, she fell just short – losing to Zhang 4-3 (losing 13-11 in the seventh game).