Retooling During Pandemic, the SAT Will Drop Essay and Subject Tests - 7 minutes read 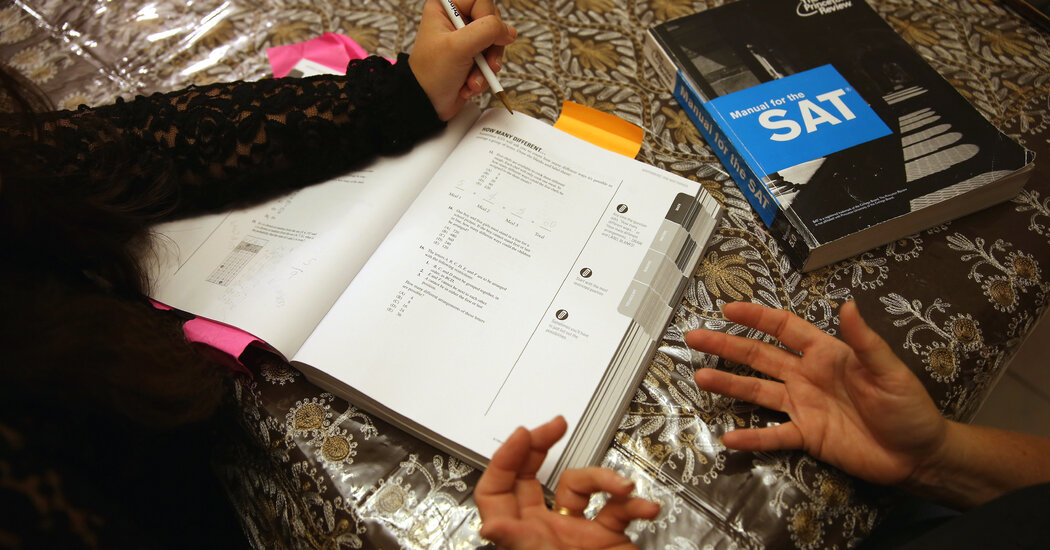 In the latest sign of trouble for the standardized testing empire that has played a major role in college applications for millions of students, the organization that produces the SAT said on Tuesday that it would scrap subject tests and the optional essay section, further scrambling the admissions process.
The move comes as the testing industry has been battered by questions about equity and troubled by logistical and financial challenges during the coronavirus pandemic.
Critics saw the changes not as an attempt to streamline the test-taking process for students, as the College Board portrayed the decision, but as a way of placing greater importance on Advanced Placement tests, which the board also produces, as a way for the organization to remain relevant and financially viable.
“The SAT and the subject exams are dying products on their last breaths, and I’m sure the costs of administering them are substantial,” said Jon Boeckenstedt, the vice provost for enrollment management at Oregon State University.


The main SAT, taken by generations of high school students applying to college, consists of two sections, one for math and the other for reading and writing. But since at least the 1960s, students have also had the option of taking subject tests to show their mastery of subjects like history, languages and chemistry. Colleges often use the tests to determine where to place students for freshman courses, especially in the sciences and languages.
But the College Board said the subject tests have been eclipsed by the rise of Advanced Placement exams. At one point, A.P. courses were seen as the province of elite schools, but the board said on Tuesday that “the expanded reach of A.P. and its widespread availability for low-income students and students of color means the subject tests are no longer necessary.”
More than 22,000 schools offered A.P. courses in the 2019-20 school year, up from more than 13,000 two decades earlier, according to the College Board. There are some 24,000 public high schools in America.
The College Board said it would discontinue the essay section on the main SAT test because “there are other ways for students to demonstrate their mastery of essay writing,” including, it said, the test’s reading and writing portion. The essay section was introduced in 2005, and was considered among the most drastic changes to the SAT in decades. It came amid a broader overhaul of the test, which included eliminating verbal analogies that were a mainstay of SAT-prep courses.
Admissions officers hoped the essay would give them a way to look at original samples of students’ writing, to better evaluate their skills. It came to be criticized, however, for promoting an overly formulaic approach to writing, and was made optional in 2016 as part of another redesign.


In recent years, the SAT has come under increasing fire from critics who say that standardized testing exacerbates inequities across class and racial lines. Some studies have shown that high school grades are an equal or better predictor of college success.
More than 1,000 four-year colleges did not require applicants to submit standardized test scores before the pandemic, and the number rose — at least temporarily — as the coronavirus forced testing centers to close and made it difficult for many students to safely take the test.
Perhaps the biggest hit came in May, when, following a lawsuit from a group of Black and Hispanic students who said the tests discriminated against them, the influential University of California system decided to phase out SAT and ACT requirements for its 10 schools, which include some of the nation’s most popular campuses.
The College Board acknowledged that the coronavirus had played a role in the changes announced on Tuesday, saying in a statement that the pandemic had “accelerated a process already underway at the College Board to simplify our work and reduce the demands on students.”
But David Coleman, the chief executive of the College Board, a nonprofit organization that in the past has reported more than $1 billion a year in revenue, said that financial concerns were not behind the decisions, and that despite the growing number of schools making the SAT optional, demand for the test was still “stronger than some would expect.”
He said the organization’s goal was not to get more students to take A.P. courses and tests, but to eliminate redundant exams and reduce the burden on high school students. “Anything that can reduce unnecessary anxiety and get out of the way is of huge value to us,” he said.
Some experts, though, said eliminating the subject matter tests could have the opposite effect, increasing pressure on students to take A.P. courses and exams, especially in their junior year, so credits can be submitted in time for college admissions decisions.


Saul Geiser, a senior associate at the Center for Studies in Higher Education at the University of California, Berkeley, said the move would “worsen the perverse emphasis on test prep and test-taking skills at the expense of regular classroom learning.”
Mr. Geiser said that mastering writing skills and subject matter “is the best predictor of how students perform in college.”
Experts in college preparation said the announcement, while a major change, was partly just a recognition of a shifting environment for standardized testing. Jonathan Richard Burdick, vice president for enrollment at Cornell, said the “handwriting was on the wall for both the subject exams and the essay option long before the pandemic struck.”
Harris Zakarin, part-owner of the test preparation company Regents Review, said consideration of the tests had diminished in recent years. “From my experience, over the past couple of years, it has become extremely rare for a college to require a student to submit an essay with the SAT,” he said.
Mr. Zakarin said he expected that the SAT’s rival, the ACT, would follow suit and eliminate its writing component. The ACT said in a statement that it continuously evaluated demands for its products.
At the University of Massachusetts at Amherst, officials dropped the SAT essay requirement in 2016 because they saw it as an undue burden on students, including an added fee, said Mike Drish, the university’s director of first-year admissions.
Mr. Drish said the university evaluated students’ writing preparedness based on their grades in English classes, as well as teacher recommendations and essays submitted as part of the admissions process.


Mark Rosenbaum, director of the California-based pro bono law firm Public Counsel, which represented the plaintiffs who sued the University of California over standardized testing, said the College Board’s decision was a step in the right direction but did not go far enough.
“Everyone knows that A.P. tests are also discriminatory in terms of student access to those tests and preparation for those tests,” Mr. Rosenbaum said. “It’s not like it eliminates racial and class discrimination.”
In addition to dropping the essay and subject tests, the College Board said it would continue to develop a version of the SAT test that could be administered digitally — something it tried and failed to do quickly with an at-home version last year after the pandemic shut down testing centers. The board gave no time frame for when a digital version of the SAT might be introduced, but said it would be given at testing centers by live proctors.
There were about 2.2 million registrations for weekend SAT tests in 2020 (some students take it more than once), but because of the pandemic, only 900,000 such tests were taken.