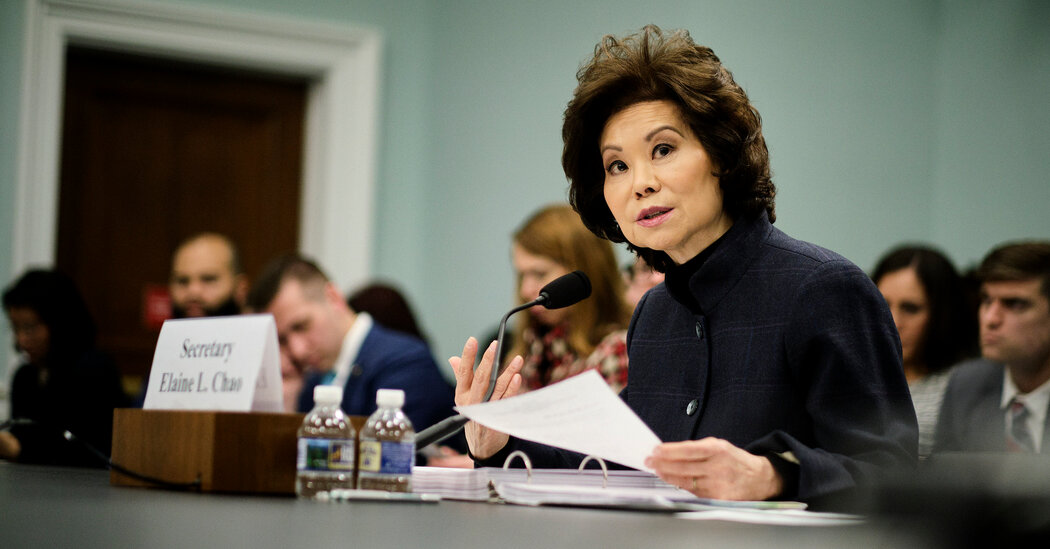 “Public servants, especially those responsible for leading tens of thousands of other public servants, must know that they serve the public and not their family’s private commercial interests,” said Representative Peter DeFazio, Democrat of Oregon and the chairman of the House Committee on Transportation and Infrastructure, which requested the investigation after the report in The Times.
The investigators found that Ms. Chao had used her staff to arrange details for Mr. Chao’s trip to China in October 2017, including asking, through the State Department, for China’s Transport Ministry to arrange for two cars for a six-person delegation, which included Ms. Chao’s younger sister Angela Chao, who had succeeded their father as head of the family shipping company, and Angela Chao’s husband, the venture capitalist Jim Breyer.
The trip had been scheduled to include stops at locations in China that had received financial support from the company and also a meeting with “top leaders” in China that was to include Elaine Chao’s father and sister, but not other members of Transportation Department staff. The trip was canceled just before Ms. Chao’s planned departure after ethics concerns were raised by officials at the State and Transportation Departments.
The investigators also found that she repeatedly asked agency staff members to help do chores for her father, including editing his Wikipedia page and promoting his Chinese-language biography. They said she directed two staff members from her office to send a copy of Mr. Chao’s book “to a well-known C.E.O. of a major U.S. corporation” to ask if he would write a foreword for it.
In one instance in 2017, staff members from Ms. Chao’s office were assigned to check with the Department of Homeland Security on the status of a work permit application for a foreign student studying in the United States who had received a scholarship from a Chao family foundation, the report said.
The student, according to the report, had interviewed Mr. Chao at the New York headquarters of the family’s shipping company in order to share Mr. Chao’s experience “with Chinese millennials.”
In 2018, Ms. Chao’s staff at the Transportation Department helped promote her father at events at Columbia University, SUNY Maritime College, Lloyd’s List, and the Massachusetts Maritime Academy, according to the report.