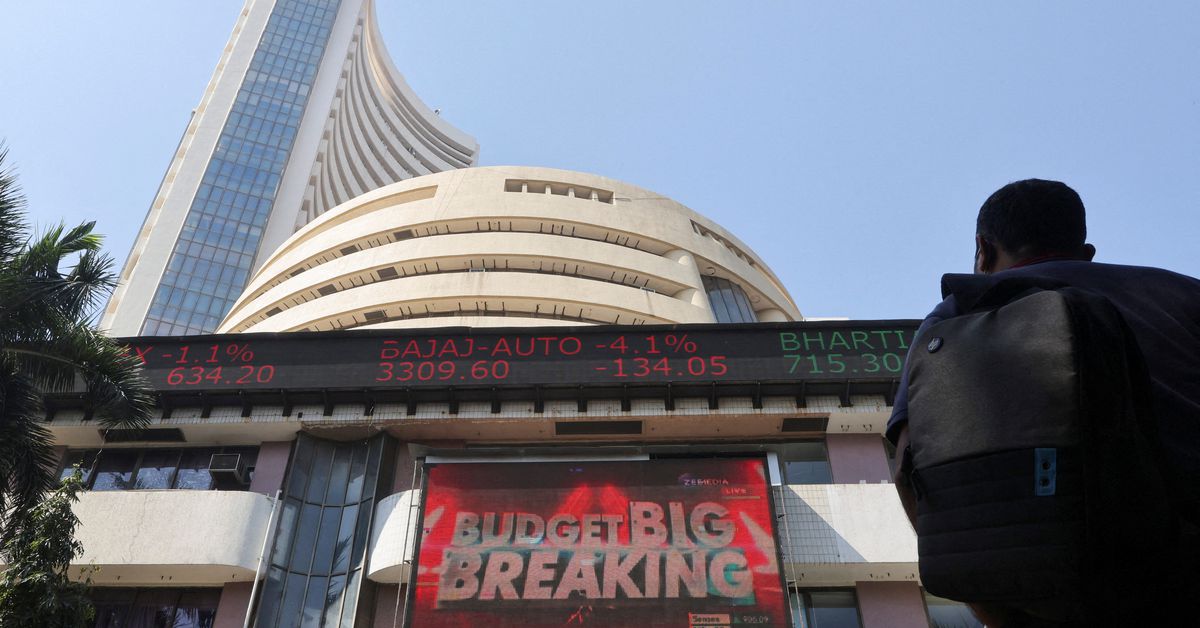 A man looks at a screen displaying budget news, on a facade of the Bombay Stock Exchange (BSE) building in Mumbai, India, February 1, 2022. REUTERS/Francis Mascarenhas

Indian markets have however outperformed their peers, with the Nifty 50 rising around 1.5% this year, compared with a 20% drop in MSCI's broadest index of Asia-Pacific shares outside Japan (.MIAPJ0000PUS).

Still, India is too interlinked with the global economy for a real decoupling, analysts at Kotak Institutional Equities Research noted, adding that the valuations are "quite expensive".

"We are not sure if the Indian market is factoring in risks from short-term factors such as higher-for-longer inflation, unlike other markets."

The Nifty Auto index (.NIFTYAUTO) was the worst performing sub-index, sliding 1.2%. Tata Motors (TAMO.NS)led the decline with a 2.6% drop, while Bajaj Auto (BAJA.NS)fell 2.1%.

Earlier in the day, India's road transport minister said he expects to finalise rules for all cars to have six airbags by the end of this fiscal year. Some carmakers have resisted the rules, saying it will increase vehicle prices and hurt demand. read more

The decline in autos was partly offset by tech and cement stocks.

The Nifty IT index (.NIFTYIT) recovered from a 0.9% drop earlier in the session to settle 0.3% higher.

Cement majors Shree Cement (SHCM.NS) and UltraTech Cement (ULTC.NS)advanced 7.1% and 4.2% each, leading the gains in Nifty 50.