Summertime … and the Sloganeering Is a Little Awkward - 5 minutes read 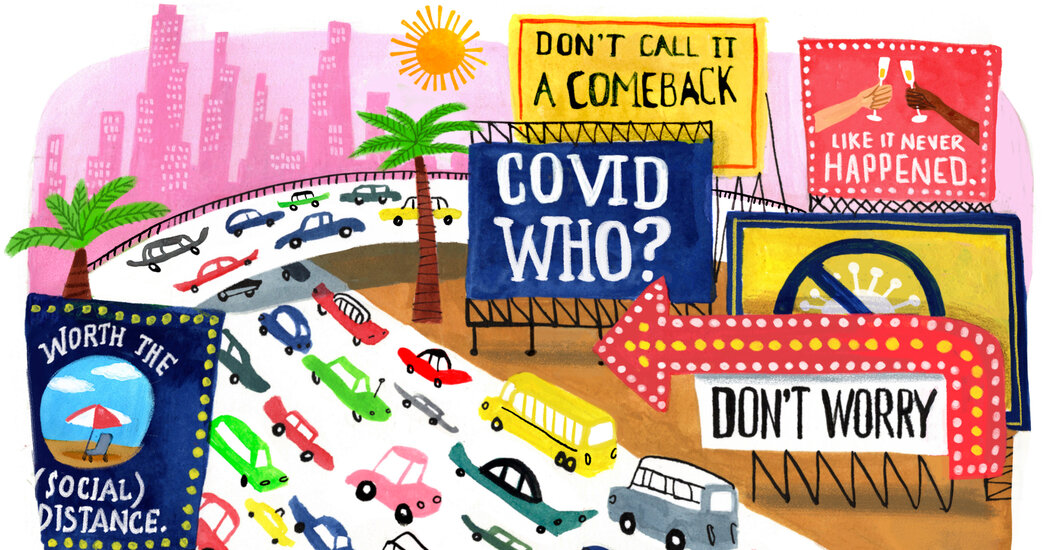 They are the opening lines of a reopening: entreaties by cities, states and nations seeking to draw a wary public by evoking a sense of togetherness, normalcy and — lest anyone forget — fun.
As if a summer reprieve from wearing masks and being subjected to virtual (in many senses of the word) entertainment needed any more hype, tourism promoters across the globe are resorting to a potpourri of slogans to stand out and attract travelers.
Hatched as part of marketing campaigns that cost millions of dollars, the catchphrases are heavy on the superlatives and metaphors, testing the boundaries between catchy and, well, contrived. But tourism officials said it was critical to convey a welcoming message to visitors and residents alike. Recovery from a year of cancellations, restrictions and malaise, they said, depends on it.
In Hamilton County, Ohio, home to Cincinnati, leaders embraced the slogan “Get Your Cincy On!”
“We want something hip and cool and energizing,” Alicia Reece, the vice president of the Board of County Commissioners, said in an interview.


Ms. Reece, a former deputy director of tourism for all of Ohio, said the campaign, which cost $2 million, was supposed to start last year but was delayed because of the pandemic. It is being paid for with federal coronavirus relief money. “People have been inside,” she said. “People have been down. It kind of says, ‘We’re back. Come on out. Let’s do it in a safe way.’”
In Connecticut, where 52 percent of the population has been fully vaccinated according to public health data, officials arrived at “Say Yes to Connecticut” for the state’s summer tourism slogan. (Not to be confused with “Say Yes to the Dress,” the TLC network show that chronicles the ups and downs of brides searching for the perfect wedding gown.)
“After a year of saying ‘no’ to so many people, our data shows that people are really ready to say ‘yes’ to travel,” said Christine Castonguay, the interim director of the Connecticut Office of Tourism.
Ms. Castonguay said that the state worked with an advertising agency and a media agency on the $1.2 million campaign, which will use a combination of platforms to get the message out, including internet streaming ads in nearby states, in-state television, social media and paid search.
“Getting out in market before Memorial Day was key, too,” she said.
Not all summer-themed catchphrases can replicate the breezy feeling of “Summer of Love,” the counterculture phenomenon conceived in 1967. Honorable mentions for the Lovin’ Spoonful’s “Summer in the City,” and “Summer Nights” from the movie “Grease.” Its homonym, the country, is beckoning visitors with the slogan: “All You Want is Greece.” (Probably not “All,” though it is hard, even for the crankiest of city dwellers, to quibble with the Mediterranean.)


Then there is the state of Illinois, which nicknamed itself “land of the road trip” as part of a $6 million tourism campaign called “Time for Me to Drive” that began May 12. (The Blues Brothers would approve: “It’s 106 miles to Chicago, we’ve got a full tank of gas, half a pack of cigarettes, it’s dark, and we’re wearing sunglasses.” )
Updated May 30, 2021, 12:31 p.m. ET

In New York, Mayor Bill de Blasio pronounced it “the summer of New York City” at a news briefing in late April that announced a full reopening on July 1.
Not to be outdone, Mayor Sadiq Khan of London announced earlier this month that the city had embarked on a yearlong tourism campaign, its largest ever — for which it had pledged 6 million pounds — called “Let’s Do London.”
Not all of London’s marketing bonanza has gone swimmingly so far. An art installation at the Piccadilly Circus Underground station by David Hockney, part of the tourism campaign, has been widely lampooned in the city.
In Denver, where Major League Baseball moved its upcoming All-Star game from Atlanta as a rebuke of Georgia’s new election rules that make it harder to vote in urban areas, officials coined the next few months: “Denver’s All Star Summer.” (Let’s hope no ad agency reaped millions for that stretch.)
“We know all too well that this pandemic has hit certain industries and their workers hardest, industries like arts and culture, restaurants, hospitality and tourism,” Michael B. Hancock, Denver’s mayor, said at a May 14 news conference announcing the city’s reopening.


Mr. Hancock said that people of color had been disproportionately hurt by unemployment resulting from the pandemic, and that “key to recovery” was getting people into restaurants, hotels and exhibits, which would bring jobs back.
Not all tourism campaigns are created equal, though.
Switzerland enlisted Roger Federer, the tennis ace and one of the country’s most recognizable celebrities, to star in a tourism video with the actor (and consummate New Yorker, but never mind) Robert De Niro. It opens with the text: “When you need a vacation without drama. You need Switzerland.”
The video shows a phone conversation in which Mr. Federer extols the virtues of the Swiss Alps to a circumspect Mr. De Niro, who says that he needs conflict and drama.
“You guys are too nice,” Mr. De Niro tells Mr. Federer, suggesting that he should have told him off, complete with an expletive.
Officials like Ms. Reece, the commissioner in Ohio, said that clever marketing only goes so far. Reopening safely and providing people with affordable entertainment options, she said, are key.
But stunning mountains don’t hurt, either.