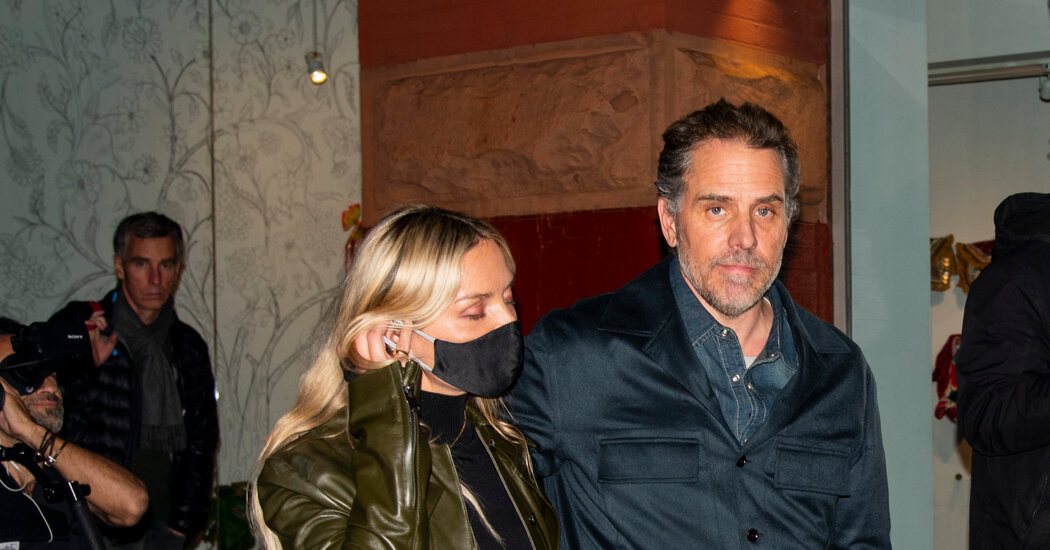 WASHINGTON — In the year after he disclosed a federal investigation into his “tax affairs” in late 2020, President Biden’s son, Hunter Biden, paid off a significant tax liability, even as a grand jury continued to gather evidence in a wide-ranging examination of his international business dealings, according to people familiar with the case.
Mr. Biden’s failure to pay all his taxes has been a focus of the ongoing Justice Department investigation. While wiping out his liability does not preclude criminal charges against him, the payment could make it harder for prosecutors to win a conviction or a long sentence for tax-related offenses, according to tax law experts, since juries and judges tend to be more sympathetic to defendants who have paid their bills.
But Mr. Biden’s taxes are just one element of the broader investigation stemming from work he did around the world. Hunter Biden is a Yale-educated lawyer; his professional life has intersected with his father’s public service, including working as a registered lobbyist for domestic interests and, while his father was vice president, pursuing deals and clients in Asia and Europe.
As recently as last month, the federal grand jury heard testimony in Wilmington, Del., from two witnesses, one of whom was a former employee of Hunter Biden whose lawyer was later subpoenaed for financial records that reflected money Mr. Biden received from a Ukrainian energy company.


The investigation, which began as a tax inquiry under the Obama administration, widened in 2018 to include possible criminal violations of tax laws, as well as foreign lobbying and money laundering rules, according to the people familiar with the inquiry.
But prosecutors face a number of hurdles to bringing criminal charges, the people familiar with the investigation said, including proving that Mr. Biden intentionally violated the Foreign Agents Registration Act, or FARA, which requires disclosure to the Justice Department of lobbying or public relations assistance on behalf of foreign clients.
The Justice Department has given no public indication that it has made decisions about any element of the case, and Mr. Biden has not been charged with any crime.
When he disclosed the investigation after the 2020 election, Hunter Biden said that “a professional and objective review of these matters will demonstrate that I handled my affairs legally and appropriately.”
Mr. Biden’s lawyer, the Justice Department and the U.S. attorney’s office in Delaware, which is overseeing the investigation, all declined to comment.


It is not clear whether the criminal probe is focused solely on Hunter Biden, or if he is among a group of individuals and companies being scrutinized. Prosecutors have also asked about potential FARA violations by a Washington consulting firm, Blue Star Strategies, that worked for the Ukrainian energy company in an arrangement that Mr. Biden helped broker, according to documents and the people familiar with the investigation.
For President Biden, the long-running case is both politically and personally fraught. Hunter Biden’s work for Burisma Holdings, the Ukrainian energy company, became a flashpoint in his father’s race in 2020 against President Donald J. Trump and helped set off the events that led to Mr. Trump’s first impeachment.
The elder Mr. Biden now oversees the Justice Department that is carrying out the investigation. And Hunter Biden, who in recent years has pursued a career as a painter, has acknowledged serious drug addiction and other problems during the period when he was seeking international business, while dealing with the illness and death of his brother Beau.


The investigation is being overseen by David C. Weiss, the U.S. attorney for Delaware. He worked in the office during the Bush and Obama administrations, and was nominated to run it by Mr. Trump. Mr. Weiss has been permitted to remain in office until the Biden case is resolved.
Hunter Biden told associates in recent months that he paid the federal taxes that had been the subject of Justice Department scrutiny. He told one associate that the tax liability was more than $1 million, and that he had to take out a loan to pay it off.
Federal tax prosecutors generally fight to keep jurors from knowing whether defendants have paid their back tax bills, arguing that the crime happens when the return is falsely filed or not filed at all, said Jeffrey Neiman, a former Justice Department tax prosecutor and a partner at Marcus, Neiman, Rashbaum Pineiro. Such knowledge could influence jurors, even if a judge asks them not to consider it.


Mr. Neiman said that defense lawyers encourage clients to pay their back taxes if they believe they could be indicted on federal tax crimes, as it often helps with sentencing.
Mr. Biden’s extensive work with foreign businesses came under scrutiny from prosecutors looking into whether he should have registered with the Justice Department as a foreign agent.
Investigators have examined Mr. Biden’s relationships with interests in Kazakhstan, a Chinese energy conglomerate and Burisma, the Ukrainian energy company, according to people familiar with the investigation.
They said prosecutors had investigated payments and gifts Mr. Biden or his associates had received from foreign interests, including a vehicle paid for using funds from a company associated with a Kazakh oligarch and a diamond from a Chinese energy tycoon. Prosecutors also sought documents related to corporate entities through which Mr. Biden and his associates conducted business with interests around the world.
But there has been debate within the Justice Department over whether the available evidence proves that Mr. Biden intended to violate FARA, which the government must prove in order to secure a criminal conviction. The prosecutors have discussed approaching potential FARA violations as a civil matter, which would require Mr. Biden to register retroactively as a foreign agent, but would avoid criminal charges, according to the people familiar with the case.
Such a resolution could complicate a potential money laundering case, since money laundering is typically charged in connection with another crime.
Over the last two years, federal prosecutors in Delaware have issued scores of subpoenas for documents related to Hunter Biden’s foreign work and for bank accounts linked to him and his associates, including two formerly close business partners, Eric Schwerin and Devon Archer, according to people familiar with the investigation.


Last year, prosecutors interviewed Mr. Archer and subpoenaed him for documents and grand jury testimony, the people said. Mr. Archer, who was sentenced last month in an unrelated securities fraud case in which a decision to set aside his conviction was reversed, had served with Mr. Biden on Burisma’s board, starting in 2014.
People familiar with the investigation said prosecutors had examined emails between Mr. Biden, Mr. Archer and others about Burisma and other foreign business activity. Those emails were obtained by The New York Times from a cache of files that appears to have come from a laptop abandoned by Mr. Biden in a Delaware repair shop. The email and others in the cache were authenticated by people familiar with them and with the investigation.
In some of the emails, Mr. Biden displayed a familiarity with FARA, and a desire to avoid triggering it.
In one email to Mr. Archer in April 2014, Mr. Biden outlined his vision for working with Burisma. In the email, Hunter Biden indicated that the forthcoming announcement of a trip to Ukraine by Vice President Biden — who is referred to in the email as “my guy,” but not by name — should “be characterized as part of our advice and thinking — but what he will say and do is out of our hands.”
The announcement “could be a really good thing or it could end up creating too great an expectation. We need to temper expectations regarding that visit,” Hunter Biden wrote.
Vice President Biden traveled to Kyiv, the Ukrainian capital, about a week after the email.
In the same April 2014 email, Hunter Biden indicated that Burisma’s officials “need to know in no uncertain terms that we will not and cannot intervene directly with domestic policymakers, and that we need to abide by FARA and any other U.S. laws in the strictest sense across the board.”
He suggested enlisting the law firm where he worked at the time, Boies Schiller Flexner, to help Burisma through “direct discussions at state, energy and NSC,” referring to two cabinet departments and the National Security Council at the White House.


The firm “can devise a media plan and arrange for legal protections and mitigate U.S. domestic negative press regarding the current leadership if need be,” Mr. Biden wrote in the email.
Mr. Biden, Mr. Archer, Boies Schiller Flexner and Blue Star Strategies did not register under FARA on behalf of Burisma.
In another set of emails examined by prosecutors, Hunter Biden and Mr. Archer discussed inviting foreign business associates, including a Burisma executive, to a dinner in April 2015 at a Washington restaurant where Vice President Biden would stop by. It is not clear whether the Burisma executive attended the dinner, although the vice president did make an appearance, according to people familiar with the event.
Prosecutors also subpoenaed records related to a lawsuit brought by the former employee of Mr. Biden’s, Lunden Alexis Roberts, in Arkansas state court, according to her lawyer.
Ms. Roberts sued Mr. Biden for child support and paternity in 2019, after one of his companies ceased paying her and providing her with health insurance, according to court records.
Mr. Biden and Ms. Roberts reached a settlement out of court in the paternity case in March 2020.
Last year, prosecutors traveled to Little Rock, Ark., and asked Ms. Roberts and her lawyer about Mr. Biden’s finances, including which corporate entity he used to pay her, and whether that entity had received payments from Burisma, according to a person familiar with the questioning.
And last month, in response to another subpoena, Ms. Roberts testified before the grand jury in Delaware, according to her lawyer.