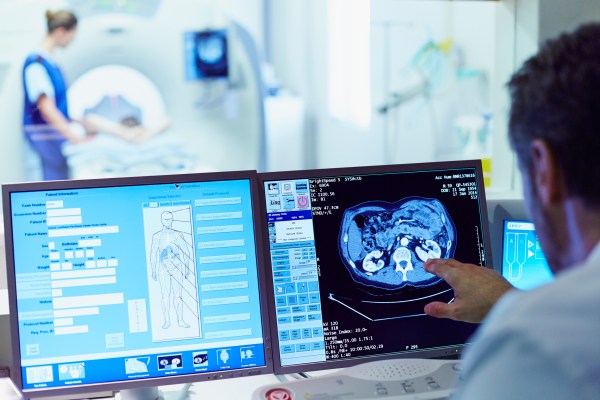 Aidoc, an artificial intelligence company that develops triage and analysis software, is about to double its funding. On Tuesday, the company announced a round of $66 million. Before that the company had raised about $67 million in its five-year lifetime.

Aidoc develops “decision support” software based on artificial intelligence. This software can read images like CT scans, detect certain abnormalities, and advise radiologists on what to do with certain patients. So far, the company’s algorithm, called BriefCase, has been approved by the FDA to evaluate patients with intracranial hemorrhage, large vessel occlusion (a type of stroke), cervical spine injuries, pulmonary embolisms, incidental pulmonary embolisms, intra-abdominal free gas, and rib fractures.

The algorithms were approved via the FDA’s 510(k) premarket pathway – which allows for fast adoption of technology that is substantially similar to other products on the market. Most algorithms are approved via that pathway, as there is no specific regulatory pathway for these products in the US (though the FDA is continuously workshopping its oversight of AI and machine learning).

“What’s really unique about us as a company is the breadth and scope of what we do. Instead of building one solution we spend the time building a platform that can accelerate AI development at a really rapid pace,” says Elad Walach, the company’s founder and CEO. “This is why today we have the most FDA cleared solutions on the market.”

The current funding round was led by the New England VC firm General Catalyst. Chris Bischoff, a managing director of General Catalyst, says the firm was convinced by the strength of the Aidoc’s team, and the seven FDA clearances. However, they were most attracted to the company’s larger approach: create an algorithm (or series of them) that addresses many different conditions.

In short, the company aims to help hospitals build an entire A.I strategy that can be applied to different conditions over time.

“It’s this sort of consultative approach, that they’re going in as a partner rather than a vendor,” says Bischoff. “It’s not just effectively a point solution, it’s a workflow tool.”

The biggest question facing Aidoc, or any other startup in the field of artificial intelligence, though, is whether it can convince hospitals and clinics to adopt an AI strategy in the first place.

Aidoc is a software made for radiologists – a group that is dwindling faster than most would like to see. Though the US Bureau of Labor Statistics projects a 7 percent increase in need for radiologists by 2029 as the population grows older, The Association of American Medical Colleges predicts the country will experience a shortfall of specialists – a group which includes radiologists.


That shortfall could range from 17,100 to 41,900 (these numbers include radiologists among other specialities, but the report doesn’t break down exactly how many radiologists are included in that count).

The UK, however, is already struggling with a radiologist shortage that ranges from 27 to 37 percent, depending on location.

AI has been proposed as one solution to the widening radiologist shortage – per the American Medical Association’s report: “advances in artificial intelligence could improve the productivity of radiologists, pathologists, and others,” it notes.

It’s only a partial solution. Though we might be able to make each individual radiologist more productive with A.I., even Walach notes that A.I software can’t really diagnose a patient all on its own.

“Definitely a radiologist needs to confirm the findings,” he notes.  “That the AI solution doesn’t do anything without the radiologist.”

At this point, the pitch for AI in the world of radiology is that it’s a tool, not a replacement for a trained radiologist. And there’s been a lot of academic work done to develop these AI tools: There were an estimated 596 papers on the topic in 2010 and 12,422 by 2019.

Despite this, AI has yet to truly become a go-to for radiologists. A 2020 survey done by American College of Radiology found that just 30 percent of radiologists were using A.I in their practices – the authors called the penetration of the technology “moderate.” Only 20 percent of those not using A.I said they had plans to purchase it in the next one to five years.

We may be poised to see a bit of an uptick in the use of A.I. in clinics or hospitals post-coronavirus. Some hospitals turned to A.I facing shortages of staff and high patient loads.

That said, Walach says that it wasn’t a major boon to Aidoc. If anything he says it slowed the company’s growth (though it was still trending upwards anyway – Walach estimates the company increased contracted annual recurring revenue seven-fold between Q1 of 2020 and Q1 2021).

Instead, he attributes the growth to a wave of research on A.I’s impact on patient welfare beyond initial diagnosis. He points to studies that have found A.I can reduce length of hospital stays by identifying which patients to send home.

“I think the biggest trends in this market is that one more and more evidence is starting to come up that AI has significant downstream benefits,” Walach says.

Meanwhile, the company projects that it will be used in 10 percent of US hospitals within two years.

To some extent, Bischoff argues that the adoption of Aidoc at other high profile health centers could help drive this growth. That could perhaps signal that the company may overcome the slower-than-expected leak of A.I from lab to clinic.

“That ability to drive high levels of trust – that would allow that deeper integration,” he says. “There’s a little bit of a lighthouse type dynamic in healthcare where if the leaders do certain things others follow.”

Aidoc is headquartered in New York, with a research branch in Israel and has about 200 employees. With this new round of funding, the company plans to invest heavily into RD and has plans to double the amount of conditions evaluated by the company’s algorithms.