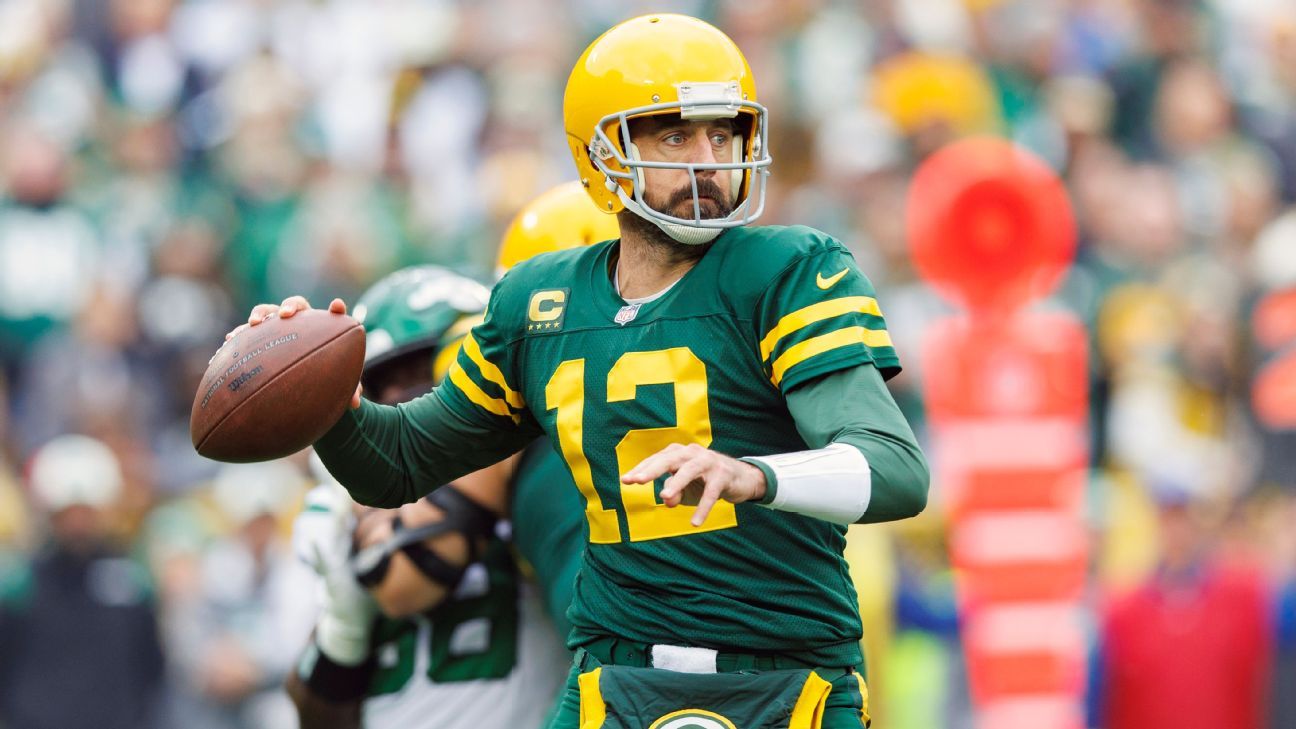 At this point, Rodgers said the Packers need to try something. And it's not just because of Sunday's 27-10 loss to the New York Jets during which they were repeatedly booed at Lambeau Field.

It has been six weeks' worth of offensive struggles. The Packers have scored 107 points (or 17.8 per game) so far this season. That's their fewest in any six-game span with Rodgers as their starting quarterback, according to ESPN Stats & Information research.

Sunday's loss, which left the Packers at 3-3, marked the first time in coach Matt LaFleur's four seasons that the Packers have lost consecutive regular-season games.

"I'm not attacking anything," Rodgers said. "I just think that based on how we've played the last two weeks, I think it's going to be in our best interests to simplify things for everybody -- for the line, for the backs, for the receivers, especially with [Randall Cobb's] injury. Just simplify some things, and maybe that'll help us get back on track."

Cobb, last week's leading receiver, left Sunday's game with an ankle injury and was emotional after he was carted off the field. Rodgers said that was because Cobb thought it was a season-ending broken ankle, but it turned to be less severe. Still, Cobb will likely miss the game next Sunday at Washington and perhaps more. The Packers also played Sunday without Sammy Watkins and Christian Watson -- both out with hamstring injuries.

The Jets hit Rodgers nine times, including four sacks. The Packers dropped six passes, their most in a game since 2017. Rodgers was off the mark on what had been routine throws. And other than a couple of throws to Allen Lazard (who had Green Bay's only touchdown on a 25-yard catch and added a 35-yarder), Rodgers couldn't get anything going down the field.

When asked to evaluate his own performance, Rodgers said he needs to raise his game "probably a little tick." He also called the offense inconsistent.

"That's why we need to simplify things because on the couple drives that we did move the ball, it was very simple things," Rodgers said. "Very simple plays, no motion, so we need to look at everything and the guys that we've got and what we can accomplish with them and let's be smart about moving forward.

"Nobody works harder than Matt on the plan each week, and nobody comes with better ideas than him and his staff. But if it's not working, it's not because those guys aren't grinding. It's because we're not executing. If you think we have the right players, then we need to simplify things. If you don't, then that's a whole other conversation."

When it comes to personnel, life after Davante Adams has not been easy. In six games, the Packers have had six different leading receivers. On Sunday, it was tight end Robert Tonyan with 10 catches for 90 yards.

Rodgers stopped short of making a plea for general manager Brian Gutekunst to make a move, but if he does, it will have to come soon. The NFL's trade deadline is Nov. 1.

"I trust him and his staff; if they feel like they need to add that they will," Rodgers said. "I think there's enough on this team to be a successful team. There's the possibility, if certain guys emerge, of us having a chance to make a run. I know Brian believes the same thing. But if there's an opportunity, I would expect that Brian will be in the mix."

After last Sunday's loss to the New York Giants in London, Rodgers expressed displeasure with the tone of some of the postgame comments in his own locker room. He brought that up again Sunday.

"It's going to be interesting to see how we all respond to this tomorrow and this week," Rodgers said. "I feel like we had a great week of practice, so this performance today was surprising. We've got to watch our language and the kind of energy that we're manifesting, but I'm going to be steady with the guys and I expect our leadership to do the same."

Meanwhile, it's up to LaFleur to figure out why the Packers can't put together a full game on offense.

"That's a fair question," LaFleur said. "I don't know. I mean, obviously if I knew we wouldn't be in this spot, right? We're in a pretty bad predicament right now.

"We're going to have to take a good hard look at everything and really do some great evaluations from a coaching perspective in terms of what's working, what's not working and try to find a different avenue because today was not good enough."