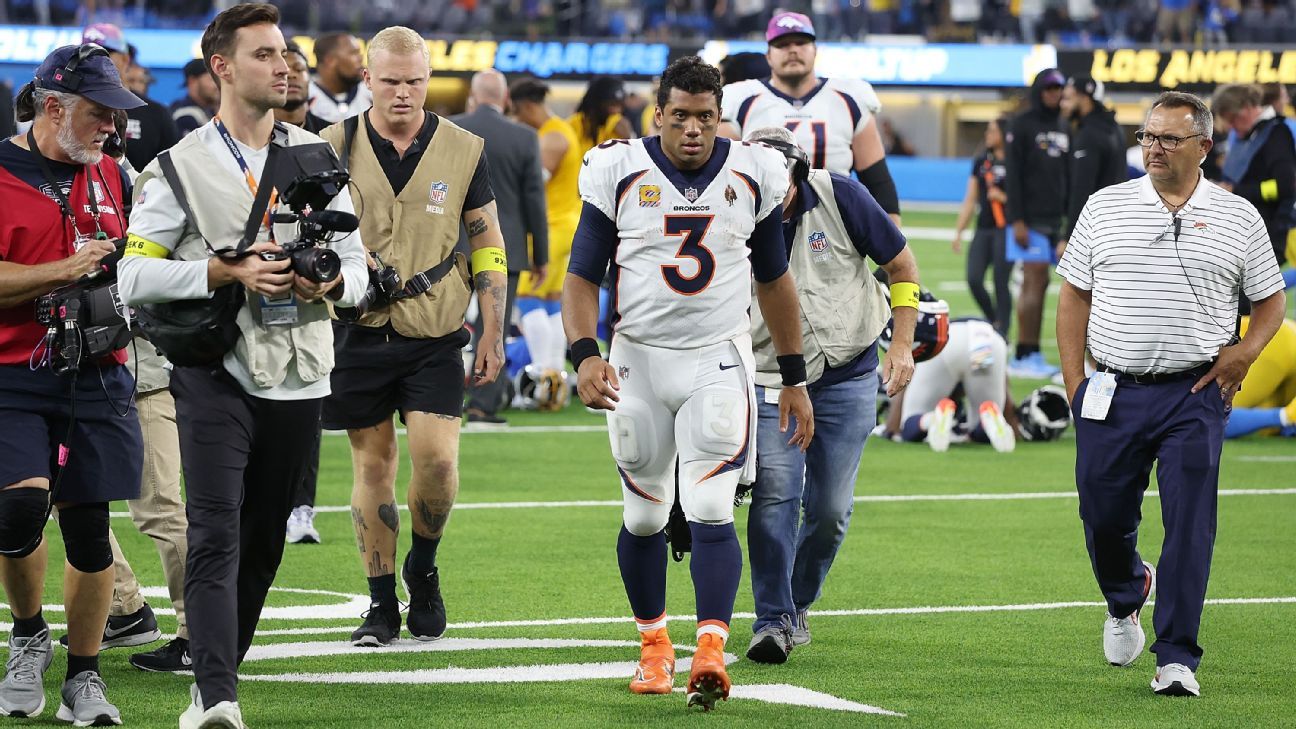 INGLEWOOD, Calif. -- Broncos quarterback Russell Wilson added another ache Monday night to an already painful start to his first season with the team as he suffered a hamstring injury in the fourth quarter of Denver's 19-16 overtime loss to the Los Angeles Chargers at SoFi Stadium.

"I kind of scrambled to move around on one, I had to throw it away, it kind of got me pretty good in the fourth quarter,'' Wilson said. "Just tried to play through it ... just trying to find a way to win the game.''

Wilson received treatment following the game and will be evaluated further Tuesday morning. As of Monday night, the belief was that he would be taken for an MRI exam as well.

Wilson's injury comes amid continuing struggles for the Broncos' offense; Denver (2-4) has scored 16 or fewer points in five of its six games and had minus-9 net passing yards in the second half against the Chargers.

Wilson had received treatment for a partial muscle tear near his right shoulder in the wake of Denver's Week 4 loss to the Las Vegas Raiders on Oct. 2. The Broncos had 11 days between their Thursday night loss to the Indianapolis Colts on Oct. 6 and Monday's defeat.

The Broncos traded five draft picks, including two first-round selections and two second-round picks, as well as three players to the Seattle Seahawks to acquire Wilson. They then signed Wilson to a five-year, $245 million contract extension just before the start of the season.

But the Broncos are now one of the league's lowest-scoring teams and rank at or near the bottom in red zone offense, goal-to-go situations and third down conversions.

"This is very disappointing,'' Broncos coach Nathaniel Hackett said Monday night. "We need to have a lot more urgency across the board -- it starts with me as a coach, then all of the other coaches, then to the players. Players need to be just more urgent. ... We've got to execute at a higher level, and we've got to come up with some better plays.''

Wilson has now thrown for fewer than 220 yards in three of the Broncos' six games, and his only 300-yard passing effort was his 340-yard day in the season-opening loss at Seattle. Overall, the Broncos have scored just five points in the third quarter, and two of those points came via a safety by the defense in Week 2 against Houston.

On Monday, the Broncos had just one third-quarter possession.

In overtime, the Broncos' offense opened with a three-and-out, and then after their defense stopped the Chargers to get the ball back at their own 31-yard line, Denver responded with another three-and-out. Wilson threw incompletions on his only two pass attempts of overtime, both on third-down plays.