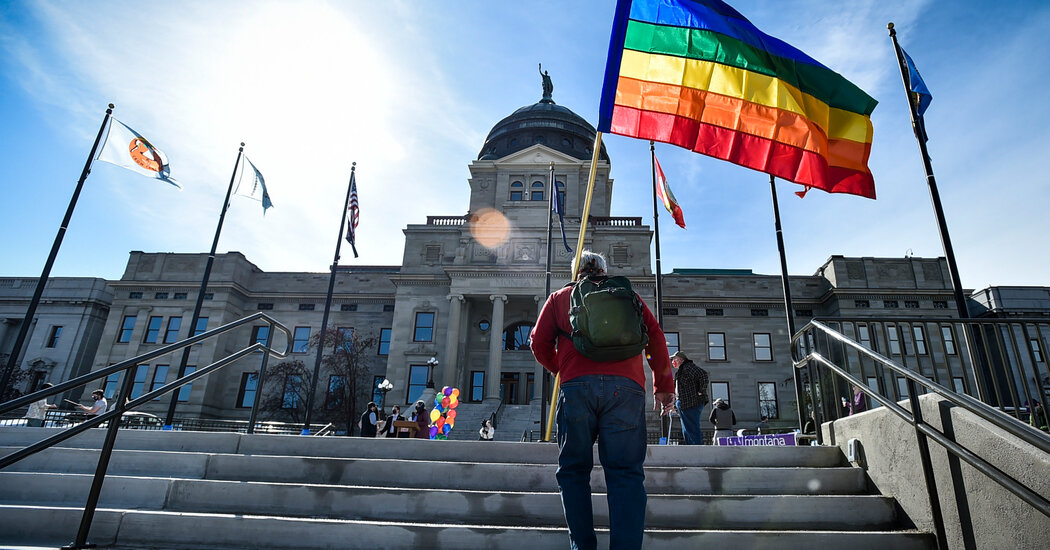 Good morning.
California will ban state-funded travel to Arkansas, Florida, Montana, North Dakota and West Virginia in response to anti-L.G.B.T.Q. legislation in those places, officials announced on Monday.
“There has been a coordinated attack on fundamental civil rights,” Rob Bonta, California’s attorney general, said at a news conference. “It’s about aligning our dollars with our values.”
There are now 17 states under California’s ban, including Texas, Tennessee, and North and South Carolina.
The law, approved by the State Legislature in 2016, requires California to add states to the list if they enact laws that discriminate against or remove protections for people on the basis of sex, gender identity or sexual orientation. It was enacted amid a backlash against states where lawmakers were trying to pass “bathroom bills” to prevent transgender people from using restrooms that aligned with their gender identity.


Bonta, a progressive ally of Gov. Gavin Newsom, said that “a wave of discriminatory new bills” was sweeping across the country and that he was required to take action.
Evan Low, a California lawmaker who wrote the ban, said it was meant to keep state workers safe and out of situations where they might be discriminated against.
“The current culture war is not a game,” he said.
In 2017, Low acknowledged that banning state-funded travel to Texas was largely symbolic. Still, he said this week that he hoped California’s moves would prompt big businesses to follow suit.
Officials didn’t say how much money the state had withheld as a result of the ban, and the attorney general’s office said it didn’t track anything related to the law beyond the list of states.
But Richard C. Auxier, a researcher at the Tax Policy Center, said that while the amount might be relatively small, the effects could snowball.


He cited North Carolina’s “bathroom bill,” which prompted a national outcry after it was enacted in 2016. In addition to travel bans like California’s, the N.C.A.A. and the N.B.A. moved tournaments in protest, and performers refused to play gigs there. The law was repealed, and the state’s Republican governor was ousted in part because of frustration over the economic fallout.
The question is how much state lawmakers respond to economic pain felt by local businesses and governments as they try to coax back visitors lost during the pandemic.
“These cities are all dying for people to come back — to go to the bars, to go to events,” Auxier said, so if other organizations take their cues from California, local tourism groups or businesses could be hurt enough to prompt them to push back against their leaders.
“‘Will it work?’ is a giant political question,” he said.
Ryland Whittington, a 13-year-old from San Diego whom officials invited to speak at Monday’s news conference, said that the ability to feel safe, play sports and get any care he needed wasn’t political, in no small part because of where he lives.
“Being trans is just a small part of who I am,” he said. “I know I’m lucky to live in California.”
He asked lawmakers to “give all kids the opportunity to be happy, healthy and to live their lives in freedom and peace.”
For more:


Here’s what else to know today


This year, across California, the biggest Pride parades were canceled because of the pandemic. But thousands of L.G.B.T.Q. Californians have still celebrated in ways large and small.
Just this past weekend, hundreds of revelers descended on Dolores Park in San Francisco.
And in Los Angeles, Boyle Heights hosted its inaugural Orgullo Fest, which organizers said they hoped would become a home for the city’s Latinx L.G.B.T.Q. community.


“Bienvenidos a casa,” Luis Octavio, an organizer of the Pride event, told The Los Angeles Times. “You no longer have to leave your community to celebrate yourself.”