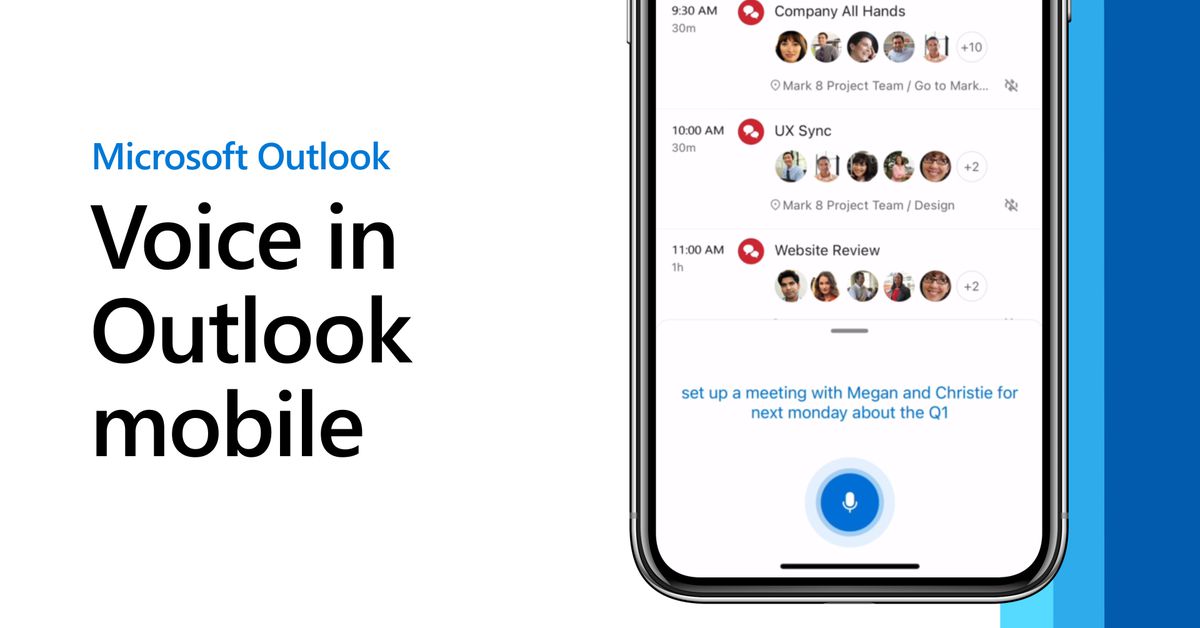 Microsoft is adding voice capabilities to its Outlook mobile app that will let people write emails, schedule meetings, and search using their voice. The new Cortana-powered voice capabilities will be available first in Outlook for iOS, with Android support coming soon.

A new plus sign icon in Outlook mobile will appear soon that lets you activate the voice mode. You’ll be able to ask things like “When’s my next team meeting?” or search for co-workers, files, and calendar entries. You can even use voice to attach files quickly, as Outlook is using the Microsoft Graph to surface relevant documents.

Dictation has been a big part of Word and Outlook on the desktop for years, and it’s now appearing in the mobile version of Outlook. You can respond to messages with your voice on iOS, or write new emails using the speech-to-text functionality.

This isn’t the first time that Cortana voice functionality has appeared in Outlook. Microsoft has been gradually building to this point with a dedicated Play My Emails feature inside Outlook mobile. This new update brings voice to nearly every part of Outlook mobile, though.

Alongside the voice addition, Microsoft is also launching a separate Scheduler Microsoft 365 service today. It’s designed for Microsoft 365 administrators to enable as a backend service that helps schedule meetings. It plugs into Cortana to allow users to set up meetings using just email replies. You can reply to a colleague confirming a meeting and simply write “Cortana, please find a time to meet next week,” and Scheduler should find the most appropriate time and arrange the meeting.

Scheduler is part of a bigger push by Microsoft to reposition Cortana as a productivity assistant. Microsoft first launched Cortana for iOS and Android in December 2015, and the company shut down the app earlier this year. The closure came after Microsoft CEO Satya Nadella previously recognized the company’s difficulties competing with other digital assistants, revealing in 2019 that Microsoft no longer saw Cortana as a competitor to Alexa and Google Assistant.