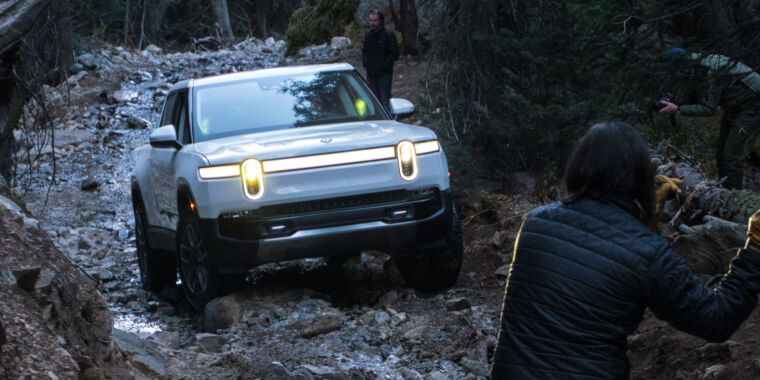 On Thursday afternoon, former Rivian VP of Sales and Marketing Laura Schwab published a blistering account of her experience at electric vehicle maker Rivian. Schwab moved to the startup in November 2020 after a lengthy career at Jaguar Land Rover and Aston Martin. Almost immediately, she began to experience a "toxic bro culture that marginalizes women and contributes to the company making mistakes," she says.

Rivian has painted an image of itself as a blend of automaker and tech startup, but Schwab says that the actual culture at the company was that of a "boys club" surrounding founder and CEO RJ Scaringe. She writes that she was sidelined and excluded from decision-making, despite being hired specifically because of her experience in automotive marketing. Schwab is suing the company for gender discrimination.

Schwab says that her boss, Chief Commercial Officer Jiten Behl, told her "he would only communicate with me by instant messenger and that would be outside office hours, 'late in the evening.'" Schwab says that after raising her concerns with another female Rivian executive, that woman was also excluded from meetings.

Schwab says that the female HR person she brought her concerns to also complained about being sidelined and ignored by Behl. Two days later, Schwab and Behl finally met in person for the first time in many months, at which point she was fired.

In her account, Schwab says that "it is simply not credible that the company would eliminate the executive responsible for sales and marketing just as Rivian was beginning to sell vehicles and was on the eve of an IPO. And a vastly growing company that was hiring over 200 new employees a week does not eliminate high performers without some ulterior motive. I had witnessed less qualified male colleagues be shifted around in an effort to keep them at Rivian."

Schwab's former boss at Aston Martin, Dr. Andy Palmer, defended her, saying that she "is one of the most professional Sales & Marketing Execs I’ve had the pleasure to work with. I’ve no idea why you’d hire someone of this quality and then not listen to them!"

Rivian declined to comment on the matter, citing the quiet period of its upcoming IPO, where it hopes to raise $8.4 billion.