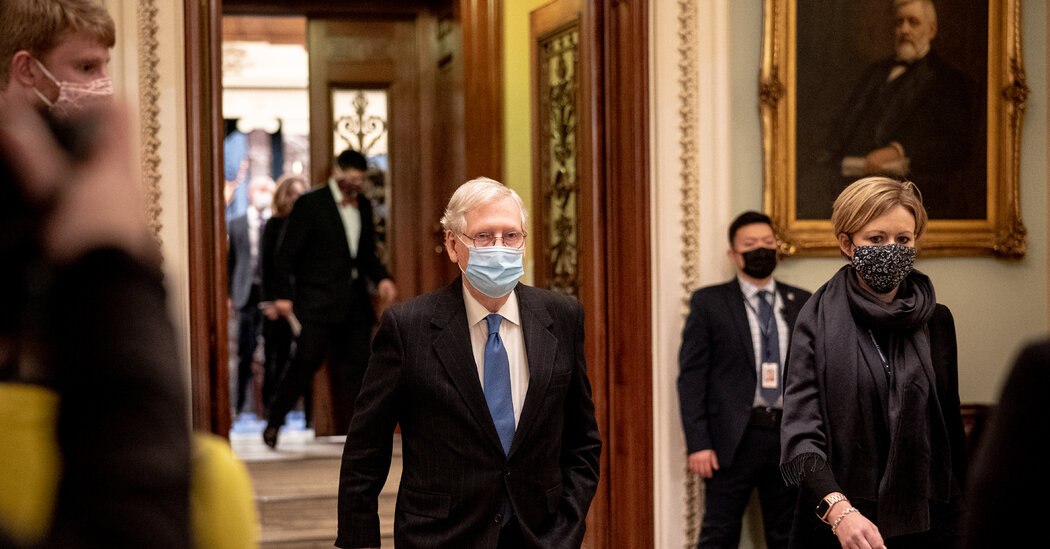 WASHINGTON — For months, as Democrats contemplated capturing control of the White House and the Senate and finally being in a position to push through their agenda without Republican interference, centrists like Senator Jon Tester of Montana have warned that they would not join their party in jettisoning the filibuster, the ultimate weapon of mass obstruction, to clear the way.
But now that President Biden is in office and Democrats have taken hold of the Senate, even Mr. Tester, who sees the filibuster as a crucial mechanism to force the sort of bipartisan compromise that is sorely needed, says his determination to preserve it is not unconditional.
“I feel pretty damn strongly, but I will also tell you this: I am here to get things done,” Mr. Tester said in an interview. “If all that happens is filibuster after filibuster, roadblock after roadblock, then my opinion may change.”
Mr. Tester is at the center of a rapidly developing showdown over the fate of the filibuster, the signature feature of the Senate — a once rarely employed weapon now used routinely to stall action in the gridlocked institution — that holds heavy consequences for Mr. Biden’s presidency.


Before the Senate can get down to business under new Democratic management, Senator Mitch McConnell, the Kentucky Republican and new minority leader, has forced a confrontation over the rule — which effectively imposes a 60-vote threshold to take any action — by refusing to cooperate in organizing the Senate unless Democrats promise not to gut it.
Senator Chuck Schumer, Democrat of New York and the new majority leader, has rebuffed the demand, which has infuriated Democrats who regard it as evidence that Mr. McConnell intends to obstruct Mr. Biden’s proposals on pandemic relief, immigration, climate change, health care and more.
“Mitch McConnell will not dictate to the Senate what we should do and how we should proceed,” Mr. Schumer said Sunday. “McConnell is no longer the majority leader.”
The stalemate has created a bizarre situation in which most Senate committees are frozen under Republican control and new senators cannot be seated on the panels even though Democrats now command the Senate majority.
Beyond the immediate logistical effects, the feud reflects a challenging dynamic in the 50-50 Senate for Mr. Biden. By holding out against Democrats eager to take charge, Mr. McConnell is exercising what leverage he has. But he is also foreshadowing an eventual clash in the chamber that might otherwise have taken months to unfold over how aggressive Democrats should be in seeking to accomplish Mr. Biden’s top priorities.


Democrats say they must retain at least the threat that they could one day end the filibuster, arguing that bowing to Mr. McConnell’s demand now would only embolden Republicans to deploy it constantly, without fear of retaliation.
“Well, that’s a non-starter, because if we gave him that, then the filibuster would be on everything, every day,” Senator Richard J. Durbin of Illinois, the No. 2 Senate Democrat, said Sunday on NBC’s “Meet the Press."
At issue is a rule that is at the heart of the consensus-driven Senate, which effectively mandates that any legislation draw 60 votes to advance. But like everything else in the chamber, the rule itself is subject to change if senators agree. As the majority party, Democrats could move to eliminate the filibuster and force through a change to the rules on a simple majority vote — a move known as detonating the “nuclear option” — if all 50 of their members held together and Vice President Kamala D. Harris cast the tiebreaking vote.
As chances rose over the past year that Democrats could win control of the White House and Congress, speculation mounted over whether they would take such action should Republicans dig in against Mr. Biden. But no one anticipated that Mr. McConnell would bring the fight to a boil right from the start by entangling the filibuster in the basic work of setting up the Senate for the next two years through what is known as an organizing resolution, which requires Senate approval.
Updated Jan. 25, 2021, 11:13 a.m. ET

In calling for the Democratic commitment, Mr. McConnell noted that Democrats relied on the filibuster themselves when Donald J. Trump was president and Republicans held the Senate.
“Democrats used it constantly, as they had every right to,” he said on the floor last week. “They were happy to insist on a 60-vote threshold for practically every measure or bill I took up.”
Mr. Schumer has said little of his strategy going forward other than calling Mr. McConnell’s demand unacceptable. The new majority leader seems content for now to let Democrats and Mr. Biden, a former longtime senator who has been reluctant to overturn the filibuster, simmer over Republican tactics.


Mr. Schumer has offered to organize the Senate under the terms of an agreement from 2001 — the last time the Senate was divided 50-50 — and give Republicans equal representation on committees, a gesture some Democrats saw as generous.
Yet given the deadlock, some liberal activists are urging Mr. Schumer to respond aggressively and immediately blow up the filibuster to enact the organizing resolution over Mr. McConnell’s objections, handing Democrats the power they won in the election. They argue that since the measure does not become law, the move would leave the legislative filibuster intact, and should win the support of even Democrats like Mr. Tester who want to preserve it.
“You could see the Democrats rally around the idea of at least changing the rules to bar a filibuster of this procedural resolution so they can take their gavels and commence the work of the Senate,” said Brian Fallon, a former aide to Mr. Schumer who is now a progressive judicial activist with the group Demand Justice. “It would be a mini-nuclear option, of sorts.”
Mr. Schumer’s allies say he still hopes to strike a deal with Mr. McConnell and is not at the crisis stage yet. Mr. Tester said he would urge Mr. Schumer and “to sit down at the table and lock the door and get it squared away.”


“But if, in fact, Mitch is going put up roadblocks and filibuster the organizing resolution, then I think Schumer has to take it to the floor,” Mr. Tester said.
Another Democrat who has taken a firm stance against eliminating the filibuster, Senator Joe Manchin III of West Virginia, has not changed his position even though Mr. McConnell’s demand is preventing Mr. Manchin from taking the helm of a committee of his own. In a 50-50 Senate, his defection alone would prevent the elimination of the rule.


“I’m in the minority of the caucus on this, I’m sure of that,” Mr. Manchin told reporters. “I think basically Chuck has the right to do what’s he’s doing. He has the right to use that leverage in whatever he wants to do. I’m not worried about that at all. They will work it out. I just haven’t changed where I’m at.”
Mr. Schumer says Mr. McConnell is trying to go beyond the terms of the 2001 agreement with his filibuster demand, calling it extraneous. But Mr. McConnell so far appears to have the backing of other Republicans, including moderates who are empowered by the 60-vote requirement, who say it is essential to have Democrats pledge to not upend the filibuster.
“Including some kind of détente on the filibuster is important,” said Senator Lisa Murkowski, Republican of Alaska, who said it wasn’t an issue in 2001 because no one at the time would have contemplated eliminating it. “It was not even a subject that was even thought about, and so it’s a different environment.”
As for Mr. Biden, the White House says his position in support of the filibuster has not changed, though he gave some mixed signals during the campaign. Mr. Schumer and Senate Democrats would be very unlikely to proceed with scrapping the practice without the endorsement of Mr. Biden, particularly since they would need Ms. Harris’s vote to do so.
Mr. Tester said the filibuster has a role to play since it can lead to legislation that can “stand the test of time,” rather than lock Congress in a cycle where one party is always trying to undo partisan legislation passed by the other. But his patience isn’t infinite.
“I didn’t come here to sit at my desk and wait for no votes to happen,” he said.
Luke Broadwater and Emily Cochrane contributed reporting.