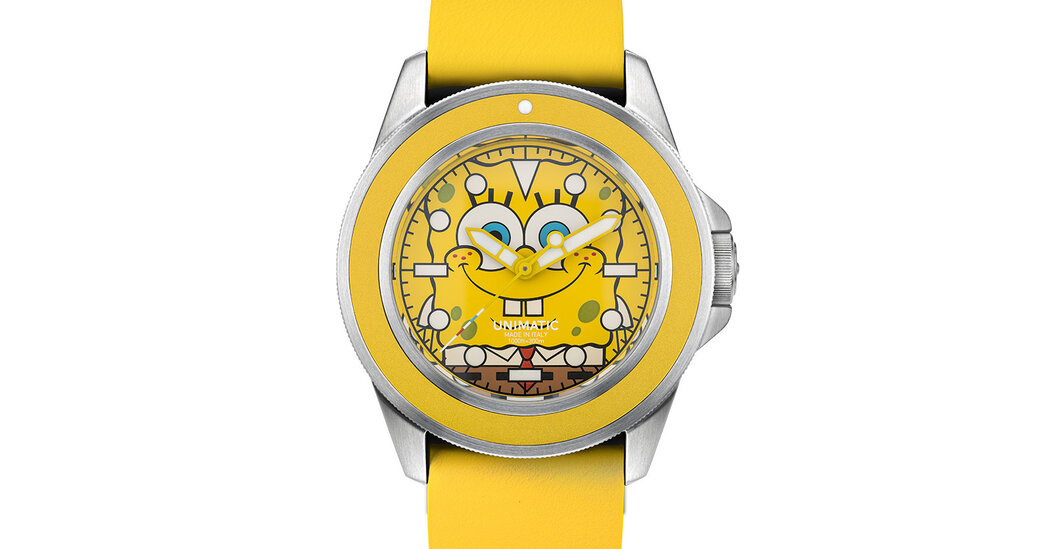 In 1984, the celebrated watchmaker Gerald Genta displayed his Fantasy collection of watches at the Montres et Bijoux fair in Geneva. It created a furor.
The fair’s managers declared, according to a contemporary report in the Eastern Jeweller Watchmaker magazine, that such a “serious” exhibition “had no room for mice, panthers (especially the pink variety), Popeye and other unsuitable characters.”
Times have changed. Today, it is far from unusual to see such figures on luxury watch dials.
And among the most notable of the 2020 releases was Omega’s Speedmaster “Silver Snoopy Award” 50th Anniversary. The 42-millimeter timepiece was the brand’s third Snoopy watch since 2003, but Raynald Aeschlimann, its chief executive, stressed that Omega’s continued connection with the cartoon dog is historical rather than commercial.


“Omega is about legacy and DNA,” he said. “I wanted this product to be a celebration of what we got from NASA.”


He was referring to the silver pin depicting Snoopy, the space agency’s safety mascot, that Omega received in 1970 for its part in saving the lives of Apollo 13’s crew. Adrift in a lunar module with no electricity, the crew used a Speedmaster worn by Jack Swigert, one of the astronauts, to time the 14-second engine burn that proved crucial to readjusting the capsule’s re-entry trajectory.
The anniversary watch shows Snoopy as a small silver figure on the blue 9 o’clock subdial. But the caseback presents him in a more whimsical scene: inside a space module that takes a trip around the dark side of the moon whenever the watch’s chronometer is activated.
Unlike the previous two Snoopy editions, numbers of the $9,600 anniversary timepiece will not be restricted — although the waiting list, Mr. Aeschlimann said, is several years long.
Moomins
Stepan Sarpaneva, an independent watchmaker in Finland, began using the characters from Tove Jansson’s illustrated Moomin series as a bit of a joke.


Asked in 2017 to produce a watch for some Finnish collectors, Mr. Sarpaneva decided to depict the Groke, a Moomin character with the silhouette of a small hill, on its sapphire caseback.
“I was teasing them a little bit,” he said — but then, according to reports, the 50-piece series sold out in one minute and 36 seconds. And the follow-up collection, released last August to coincide with the series’ 75th anniversary, met with similar success.
The 38.7 millimeter S.U.F. Sarpaneva x Moomin featured a triple-layer skeletonized dial depicting the series’ Moomintroll character curled up beside a pond. The background foliage was hand-painted in eight Super-LumiNova colors, in varying combinations, to bring the dial to life in the dark.


Each of the 75 one-of-a-kind models sold for 6,200 euros ($7, 572). Though not a Moomin fan himself, Mr. Sarpaneva said the reaction to the watch proved gratifying. In place of their usual Instagram wrist shots, he said, hard-core watch enthusiasts wrote about their connections with the series. “Suddenly there’s a Moomin and they go deeper,” he said. “Because it’s so much more than just a watch.”
In November, Phillips auctioned the prototype of the timepiece, provided by Mr. Sarpaneva, with the sale price of 315,000 Hong Kong dollars ($40,630) going to benefit a Finnish environmental organization.


In the same auction, a 2008 Gerald Genta Mickey Mouse watch sold for 138,600 Hong Kong dollars, more than twice its upper pre-sale estimate. “A year, or two years ago, the interest for collectors for those kinds of cartoon watches increased dramatically,” said Thomas Perazzi, Phillips’ head of watches for Asia. Mr. Perazzi stressed that he was referring specifically to timepieces made by independent brands.
Collectors are always looking for rarity, and these watches are often produced as high-quality limited-edition pieces, he said. And, he added, “there is definitely a nostalgic element.”
For the Moomin watch, “we achieved a very strong price because the buyer, and also the underbidders, grew up with the Moomins,” Mr. Perazzi said.
Cinderella and SpongeBob
Capitalizing on this nostalgic pull can often pay dividends for brands. And a number of companies, including Undone, RJ and the Hong Kong-based tourbillon makers Memorigin, have made character collaborations a strategic staple of their collections.
In 2018, the Japanese watch brand Citizen followed suit, announcing its partnership with Disney at the Baselworld watch fair.
Since forming the alliance, Citizen has had its pick of Disney’s prodigious assortment of characters for timepieces and, in June, introduced the 70th Anniversary Cinderella Watch to mark the classic film’s debut.


In one of several references to the movie, Cinderella’s horse-drawn carriage, rendered in a silver pearlized print, traverses the white mother-of-pearl dial studded with diamonds. Produced in a 1,950-piece limited series, the $440 two-tone stainless steel wristwatch is powered by Citizen’s solar Eco-Drive technology. (“Disney has provided us with the opportunity to reach a broader consumer audience that includes a younger as well as female demographic,” said Jeffrey Cohen, the company’s president for U.S. operations.)
Still, depending on the character on the dial, the results can be polarizing.


“When it’s personal to you, you love it,” said Ariel Adams, founder of aBlogtoWatch. “If it’s someone else’s childhood hero, people are offended: ‘What a distasteful immature product that is,’” he said.
Mr. Adams own animation watch collection includes a $20,000 RJ Super Mario Bros. watch that, on release, was decried as “not luxury,” he said. (RJ, the brand name used by the watchmaker Romain Jerome, went out of business last year.)
His latest acquisition was a yellow watch featuring Stephen Hillenburg’s comic TV character SpongeBob SquarePants. “It’s a very simple psychology, it just reminds me of something that makes me happy,” Mr. Adams said.
The whimsical timepiece was one of two dive watches released in November as part of 100-piece limited collections by the Milan-based watch company Unimatic: the SpongeBob II U1-SS2 (Mr. Adams’ model) and U1-SS3.


A twist on the company’s minimalist Modello Uno watch, the idiosyncratic U1-SS2’s yellow face featured a multicolored SpongeBob and his characteristic toothy grin. In contrast, the subtler U1-SS3 had SpongeBob’s hooded eyes and teeth picked out in Super-LumiNova colors against a black matte dial.
Priced at €700, the yellow U1-SS2 sold out within an hour. Several of the €650 black U1-SS3s remain.
The watches were a departure for the ordinarily severe brand, said Giovanni Moro, Unimatic’s co-founder. “We do very professional and serious, clean-designed tool watches.”
With the SpongeBob models, the brand took “a risk for the sake of playing,” he said. “And the bet was a good one.”