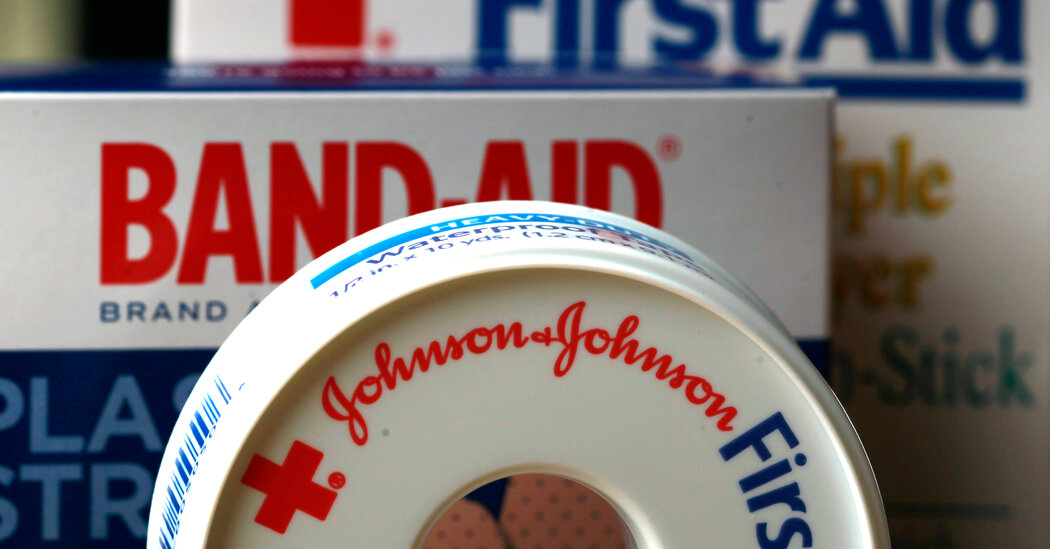 For generations, Johnson Johnson has been synonymous with American health care — and, at times, with American health care scandals.
Now the 135-year-old company is joining a growing roster of iconic American businesses that are splitting up as they seek to please restive shareholders and move past recent controversies.
On Friday, Johnson Johnson announced plans to spin off its consumer-products division — famous for household-name but not-very-lucrative brands like Tylenol, Band-Aid and Neutrogena — into a separate company. Johnson Johnson will keep its more profitable, faster-growing businesses in pharmaceuticals and medical devices.
The planned breakup comes after years of tribulations for Johnson Johnson. The company is juggling lawsuits for its role in the opioid epidemic and over accusations that the talc once used in its baby powder had caused cancer in some customers. Even the company’s single-shot Covid-19 vaccine, once expected to be widely used around the world, has fallen far short of its promise because of production problems and fears about rare side effects.


Johnson Johnson, with headquarters in New Jersey, is part of a parade of once-proud companies that have recently unveiled plans to break themselves up or radically shrink. This week alone, the industrial conglomerates General Electric and Toshiba announced that they would split up. In recent years, pharmaceutical companies including Merck, Pfizer and GlaxoSmithKline have also shed or reorganized their consumer-products operations to focus on businesses, in particular drugs, that enjoy fatter profit margins.
“We are at the point in the cycle where conglomerates are less popular,” said Erik Gordon, a professor who studies business strategy at the University of Michigan Ross School of Business. “The pharma companies in particular are trying to focus on pharma.”
Even before the planned split, Johnson Johnson was in the midst of a generational change. The company announced over the summer that Joaquin Duato, who had run its pharmaceutical division, would take over as chief executive in January. Alex Gorsky, who has been chief executive for nearly a decade, will stay on as executive chairman.
The company’s stock price has nearly tripled since Mr. Gorsky took the reins in 2012, bolstered by a steady stream of new products and experimental drugs. Medicines for inflammatory conditions and cancer have been key drivers of the growth. But those successes have been accompanied by high-profile missteps.
Johnson Johnson faces thousands of legal claims that its talc-based products may have caused cancer. The company discontinued sales of talc-based baby powder in North America last year, though it has said that it is safe. This fall, Johnson Johnson dumped the liabilities from that business into a new division, which last month filed for bankruptcy protection. (It will remain a subsidiary of Johnson Johnson under the plan to divide the companies.) The reorganization drew criticism from lawmakers, academics and trial lawyers as a ploy to protect investors at the expense of customers who say they were harmed by Johnson Johnson’s products.


At the same time, Johnson Johnson was also under public and legal fire for its role in the opioid crisis. The company was a manufacturer of potentially addictive opiate painkillers, a business it discontinued entirely in the United States last year. It faces lawsuits seeking billions of dollars, though courts in California and Oklahoma recently handed victories to Johnson Johnson and other opioid makers.
Updated Nov. 13, 2021, 10:33 a.m. ET

Johnson Johnson, like other medical companies, has weathered its share of reputation-threatening controversies. In a 1982 episode that became a textbook example of how to manage a corporate crisis, the company had to scramble after someone tampered with capsules of Extra-Strength Tylenol, turning them lethal with potassium cyanide and killing seven people. The company regained public trust by quickly pulling Tylenol from American shelves and introducing new tamper-resistant packaging.
Throughout, the company has relied on the “halo effect” created by popular consumer products, none more so than its Johnson’s Baby line of shampoos, lotions, moisturizers and powder for infants. Such products have thin profit margins but have embossed public perceptions of Johnson Johnson as a benevolent, gentle company.
“It gives us a wonderful image that most companies would kill for,” Ralph S. Larsen, the company’s chairman at the time, told Forbes in 2001.
But the commercial value of those brands has weakened over time. Even as consumers continue to refer to all plastic bandages as Band-Aids — the rare brand, like Kleenex and Xerox, whose name is a stand-in for an entire range of products — they have embraced cheaper, generic rivals. The same is true for products like Tylenol.
Even lingering affection for the company’s consumer products does not do much to advance Johnson Johnson’s medical businesses, which are far more important to the company’s finances.
“Doctors and hospitals just want hips and knees, and drugs that work, at a cheap price. They’re not really thinking of Band-Aids,” said Les Funtleyder, a health care investor who followed Johnson Johnson for years as an analyst.


Johnson Johnson, founded in 1886 as a maker of surgical dressings, is by many measures the world’s largest health care company. Even as stand-alone businesses, the two independent companies will be enormous. The pharmaceutical and medical devices division is expected to report $77 billion in revenue this year. And the consumer health business is predicted to bring in $15 billion in sales.
Johnson Johnson said it planned to complete the breakup within two years. Executives described the move as an effort to better focus on and to expand two very different types of businesses. “We must continually be evolving our business to provide value today, tomorrow and in the decades ahead,” Mr. Gorsky said in a statement.
Johnson Johnson’s Covid vaccine is a minor part of its overall business — it is expected to bring in just $2.5 billion in revenue this year — but presented a high-profile opportunity for the company to salve some of its recent reputational wounds.
But the vaccine has fallen short of expectations that it would be a workhorse of the global vaccination effort, especially for hard-to-reach populations. Unlike the vaccines from Pfizer, Moderna and AstraZeneca, Johnson Johnson’s requires only a single dose.
The company had hoped to produce a billion shots this year but now expects only about half of that. Its output has been slowed by production problems, most notably those stemming from contamination at a Baltimore plant run by a contract manufacturer, Emergent BioSolutions.
Fewer than 16 million people in the United States have been fully vaccinated with Johnson Johnson’s shot, compared to 108 million for Pfizer and 71 million for Moderna.