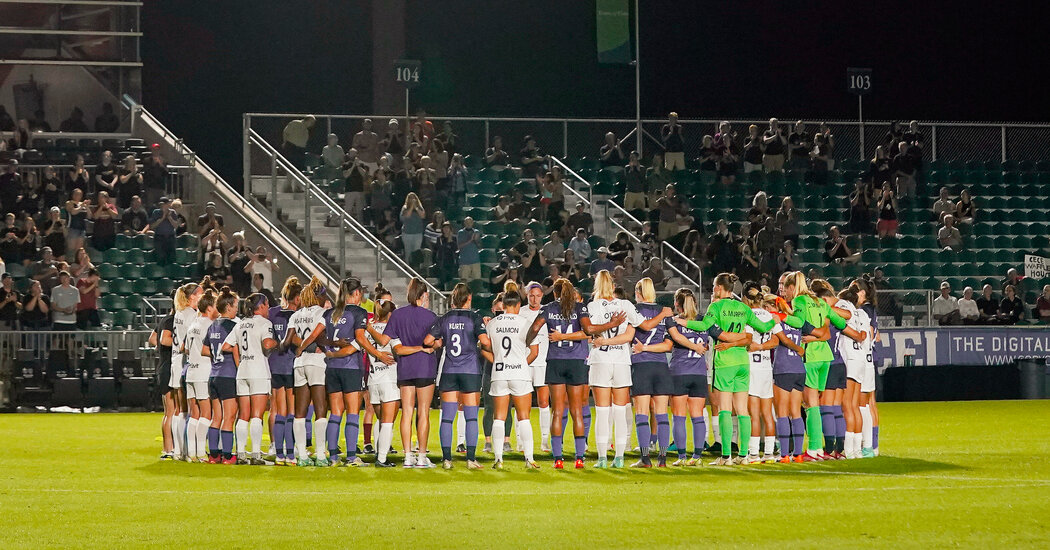 In the top professional soccer league for women in North America, everyone understood that the power primarily rested with men: the team owners, executives and coaches who controlled the athletes and their careers.
While the National Women’s Soccer League is home to celebrities like Megan Rapinoe and Alex Morgan from the World Cup-winning U.S. national team, the backbone of the labor comes from unheralded players who earn meager wages and, until now, were reluctant to speak out and disrupt a league that is likely their only shot at playing professional sports in the United States.
Yet a wave of allegations in recent months — that coaches sexually abused or harassed players as executives looked the other way — has highlighted a power dynamic that threatened the safety of women, allowing misconduct to go unchecked and abusers to find new jobs around the league.
And while there has been a burst of outrage, and top leaders — again, mostly male — have promised reform, many players fear that the basic power imbalance will remain even as they continue to speak out in a way that evokes the #MeToo movement in Hollywood and other industries.


“The league should be scared because we are no longer scared anymore,” McCall Zerboni, the captain of Gotham FC, said in a telephone interview. “We have hit rock bottom and we are going to fight as hard as we need to, as hard as we can, for everything we deserve and need. We aren’t going to tolerate it anymore, we won’t be silent anymore.”
Kaylyn Kyle, a former player for the Orlando Pride, said while providing commentary on the broadcast of a game on Wednesday, “If this isn’t a moment, I don’t really know what is.” She continued, “Devastated, disgusted, but I’m not shocked, and that’s the problem. I mean, I played in this league where this was normalized. That’s not OK.”
When several games were played on Wednesday night, players stopped their matches at the six-minute mark to stand together in silent protest. The sixth minute represented the six years it took for a coach accused of sexual harassment and sexual coercion to be ousted from the league.
The fallout is widespread. At least four coaches have been fired, including one for allegedly coercing a player to have sex with him and sexually harassing other players, and another after allegations of verbal abuse, which included ridiculing players. The league’s commissioner, Lisa Baird, has resigned under pressure after the league mishandled the abuse case of a coach who left one team amid serious accusations of sexual misconduct, only to land with another team and be celebrated for leading that franchise to championships.
Front office executives have been forced out. Games were postponed at the players’ insistence. At least five investigations have been promised and no one can be sure what they will reveal.


“Right now, as we look across the soccer landscape, packed with painful stories of sexual abuse, emotional abuse and team mismanagement, we, along with our peers, are suffering,” players from the Washington Spirit said in a statement earlier this week. Their former coach, Richie Burke, was fired last month after players accused him of verbal harassment.
A Lack of Consensus


The path forward for the league remains muddled at best.
While the N.W.S.L. will resume a full schedule this weekend, it has been nearly paralyzed by the abuse scandal, with a glaring lack of trust among the players, owners and the league, according to interviews with more than a dozen people directly involved. Everyone wants someone to blame, and there is little apparent consensus about how to fix the N.W.S.L. and its problems.
“People think of athletes as superhuman beings, particularly professional athletes, when actually they are incredibly vulnerable,” said Mary V. Harvey, an Olympic gold medalist, World Cup winner and former goalkeeper on the U.S. women’s national team who is now the chief executive of the Centre for Sport and Human Rights. “You don’t want to complain and be the reason the league folds. There’s a massive power imbalance, and when you have power imbalance, that’s where these human rights violations happen.”
Teams and the players’ union have publicly detailed their demands. The union this week tweeted that it wanted a mandatory suspension of anyone in a position of power who was being investigated for abuse. It also asked for more transparency in the investigations and a say in who is hired as the next commissioner.
It’s a moment of reckoning for a sport that bounded into America’s consciousness when Mia Hamm, Brandi Chastain and their teammates on the U.S. women’s national team won the 1999 World Cup in front of a Rose Bowl packed with about 90,000 fans.
Val Ackerman, commissioner of the Big East Conference and the former president of the W.N.B.A., said sports organizations should pay close attention to what is unfolding in women’s soccer.


She called the N.W.S.L. situation “a wake-up call for our business,” and said it should prompt every sports entity to re-evaluate its policies and infrastructure. Sports leaders need to be especially mindful of safeguarding their employees, she said, in light of the continued gender imbalance in sports, with men often coaching and running women’s teams.
At the start of this season, only one of the N.W.S.L.’s 10 teams was coached by a woman, and a majority of the owners and investors were men.
“What’s sobering is that we are looking at the 50th anniversary of Title IX next year and 50 years later, we are still fighting for the equitable treatment of female athletes and a safe, respectful competition environment for female athletes,” Ackerman said, referring to the federal law that mandates gender equity in federally funded educational institutions. “It makes you wonder how far we’ve really come on the basics.”
The current professional league is hardly a picture of strength or equity. Few N.W.S.L. teams are profitable. The minimum player salary is about $20,000, while it is at least three times that in Major League Soccer, the men’s professional league in the United States.
Investigations have been promised by U.S. Soccer, the governing body of soccer in the United States; FIFA, the global governing body of the sport; the N.W.S.L. and the players’ union.
Those inquiries will seek to answer how coaches accused of abuse were hired and were allowed to remain in the league and change teams without repercussions.
Nadia Nadim, an Afghan-Danish player on Racing Louisville FC, said in a tweet last month that players should be ready to spark an uprising and follow through with it to force change because the sport’s officials have failed miserably at their jobs.


“This league can be great, as we have the best players in the world,” she wrote. “We just need to get the idiots out, gain power and make this league as great as it CAN be.”
A ‘Very Well Respected’ Coach


Paul Riley, the coach at the center of the minute-long protests at matches this week, rose from a youth soccer coach to become one of the highest-profile coaches in the women’s game, winning two championships in the N.W.S.L., with the North Carolina Courage.
In 2015, three years before winning his first championship, Riley left the Portland Thorns N.W.S.L. team. The Thorns now say he was fired for cause, though the club made no such announcement at the time. Riley showed up months later coaching another N.W.S.L. team, the Western New York Flash. When the Flash, which eventually moved to North Carolina, announced the hiring, an executive of the team praised Riley for being “very well respected around the globe.”
Last week, in a report in The Athletic, two former players said Riley abused players at will and that they had reported it to team management and the league. Riley denied most of the allegations to The Athletic, and did not respond to messages seeking comment.
Sinead Farrelly, who played for Riley with the Philadelphia Independence in 2011 and then again with the Portland Thorns in 2014 and 2015, said Riley used his power as her coach to coerce her to have sex with him. Meleana Shim, who also played for the Thorns, said that after a night of drinking Riley pressured her and Farrelly to kiss each other. If they did so, the team would not have to run sprints the next day. Other players have accused Riley of making inappropriate comments.
In September 2015, Shim emailed the owner of the Thorns, Merritt Paulson, as well as other team executives, about the kissing incident. She also emailed Jeff Plush, then the commissioner of the N.W.S.L.


The next week, the Thorns announced that Riley would not coach the team the next season, thanking him for his service and making no mention of any misbehavior. In a statement this week, Steve Malik, the owner of the Courage, wrote that upon hiring Riley, he “assured that he was in good standing.”
Riley, who was fired from the Courage last week, is now under investigation by the U.S. Center for SafeSport, which oversees abuse in Olympic sports.
After that firing, Baird, the commissioner of the N.W.S.L. and the former chief marketing officer of the United States Olympic Committee, resigned less than two years into the post. Under her leadership, the league implemented its first anti-discrimination and anti-harassment policy. But her efforts to protect players were seen by many of them as insufficient and, at times, negligent.
“The league must accept responsibility for a process that failed to protect its own players from this abuse,” Morgan said in a Twitter post.
The ongoing investigations are likely to scrutinize several coaches who recently have been removed from their posts.
Burke, the former Washington Spirit coach, stepped down in August for “health reasons” just before a Washington Post report detailed accusations that he verbally abused players and was racially insensitive. He remained in the team’s front office until a league inquiry prompted his firing. Burke did not immediately respond to a request for comment.
Two other coaches — Christy Holly of Racing Louisville FC and Craig Harrington of the Utah Royals — also were ousted from their jobs in the last year amid whispers of toxic workplace cultures. Holly was fired in August “for cause,” as his team said, but it did not provide details. Holly did not return requests for comment.


Harrington, who was fired by the Royals last year after being put on leave during an unspecified investigation, was soon hired to coach women’s soccer in Mexico. Harrington did not respond to an emailed request for comment.
Yael Averbuch, a former N.W.S.L. player and the current interim general manager of Gotham FC, said abuse cases in the league existed and are ongoing partly because players don’t have a safe, confidential way to report abuse or harassment. So cases go unreported, or are reported but aren’t properly handled, she said, and players are afraid to make the accusations public because they want to keep their jobs.
“As a player I don’t know if I ever had an H.R. department to go to,” Averbuch said. “These are small businesses, and this league was for a while very new.”
Harvey, the former national team player, said firing abusive coaches was just one step toward making the league a safer place. Abuse, to her dismay, is ingrained in the culture of women’s sports — and has been for as long as she can remember. A sea change is necessary, and that might take some time.
“It starts with the culture,” she said. “If you have a culture that engenders respect toward women and women athletes, then things look entirely different.”