How a Nonprofit Soccer Leader Spends His Sundays - 5 minutes read 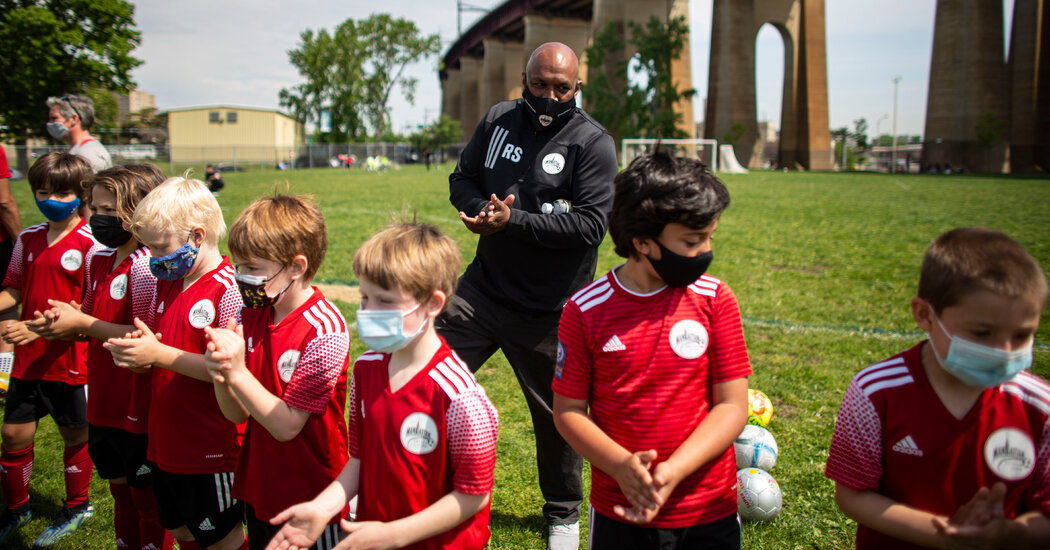 Manhattan Soccer Club is one of the largest youth soccer organizations in New York. Its home base for play is Randalls Island in Manhattan, where around 1,500 members between 5 and 23 train and compete on its 31 soccer fields. Ray Selvadurai, who has been with the club for 23 years, is its director of coaching.
Play was suspended last year, from March through August, because of the virus, which took one of the club’s beloved coaches. “Freddy Fuentes was only 49; he worked here for 15 years,” Mr. Selvadurai said. “We still haven’t recovered from that, and probably never will.”
But with players and parents back at Randalls Island, things, on the field at least, are returning to normal. “We’ve realized how much we missed all of this,” Mr. Selvadurai said. “I’ll never take it for granted again.”
Mr. Selvadurai, 48, lives in Spuyten Duyvil, in the Bronx. His daughter, Ella, 10, lives with him on the weekends.


LIGHT AND SWEET My biological alarm clock goes off at 7:30 a.m. I have two cups of coffee with milk and two Equals each — I like it sweet. I make it using coffee from Tierney Fine Foods, this old-world deli that is five minutes away from my home. My daughter appears in the kitchen and asks for “Dad’s eggs Benedicts.” We talk about our day and the upcoming week. She tells me about her school friends and her new sister who is only a few months old. This is our special time to sit together and learn about her life.


STANDING ‘DADDY’ ORDER If we have home games, I drop her off at her mother’s in Pelham. We do a deli run at Tierney first. Ella walks in and just says, ‘Daddy.’ They know it’s for me and hand her my coffee and a turkey and Cheddar sandwich.


PARK AND PACK The drive to Randalls Island is maybe 20 minutes. I’m there by 10:30. I park in a lot under the Triborough Bridge. I get out my folding chair, which I bought at REI, my favorite store for outdoor camping, which is just big enough for me to sit on and be comfortable, my Yeti filled with water and a notebook, and put everything into my knapsack. For the next six hours I watch the games and training sessions.


THE ROUNDS I oversee the entire club, so I’m in charge of developing the curriculum for the players and working with the coaching staff. We are a national level program, so we’ve had some great success professionally. As a director, people need to see you and know who you are. Sundays are when the families come, that’s the real dynamic of this city sport. There’s a tremendous joy to see everyone. It all feels so normal. To watch soccer games live outside is a special thing. When it’s taken from you, you realize how much you miss it.


PLAY For the first two hours I watch our local teams, who are ages 12 to 19. At 12:30 I watch the premier teams, also 12 to 19. These kids are at a completely different playing level. At 2:30 I visit the players ages 8 to 11. This is the sponge age; they pick up everything. To see them grow up is a real joy. They love wearing the uniform and being part of a team. This is the future of our club. I’ve been drinking water all day, but around now I’ll have a PowerBar or sandwich.


BREAKDOWN At 4:30 whoever has the last game helps break down the field. It’s a sea of parents and coaches bringing over soccer equipment — flags, nets and benches — which is nice because everyone collaborates. Everything gets put into a large, red storage locker. There’s a box in the corner full of lost and found items that’s always overflowing: shin guards, cleats, soccer balls, sweatshirts. When you have 1,500 kids, you name it, it’s left here. I trek back to my car. The bridge is right above me. You can see and hear the cars as it connects our community with the other boroughs.
SUSHI WITH ELLA I head back to Pelham and pick up my daughter around 5:30 and drive back to my house, which is only 6.7 miles away. She might do her homework or play Roblox on her iPad. It’s a game where you build little towns and economies. She’s a big sushi fan so we order in from Sushi Palace — miso soup, spicy tuna and crab rolls, salmon pieces — and talk about our day.


BRIDGE FILMS I’ve been trying to get Ella to embrace movies I saw as a kid. We’ve seen all three of the “Karate Kid” movies. Watching them with her makes me feel nostalgic and connects the generations. Sometimes we laugh at the same thing. She’s the female version of me in a lot of ways. By 9:30 she’s showered and in bed.
WORK, THEN DISCONNECT I go over notes from the training sessions and games and prepare for the week at the dining room table. I’ll send emails and communicate with coaches. I think about the players. During the week I’m out there with all of them. I’m pretty close to knowing everyone’s name. My players will call and talk. It’s an earned trust between families and players. It’s a lot of responsibility to be this other voice in their lives. At midnight I stop. I have a rule: I keep my phone, on silent, on the coffee table outside of the bedroom. My sleep has to be great and uninterrupted.
Sunday Routine readers can follow Ray Selvadurai on Twitter .