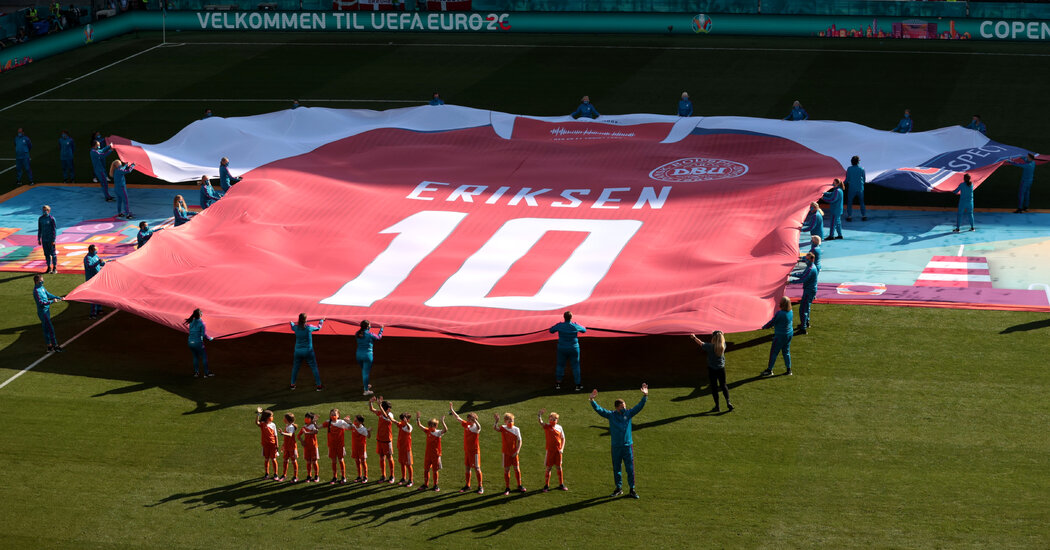 UPDATE, June 18: Denmark’s soccer federation said Friday that Christian Eriksen had undergone successful surgery to implant a defibrillator to monitor and correct his heart rhythm. He also has been released from the hospital and, after a brief visit with his teammates, had returned home to continue his recovery.
The fans cheered for Christian Eriksen in Copenhagen’s streets and parks, and they called out his name in the stands at Parken Stadium. And, in the 10th minute, the players from Denmark and Belgium even stopped their match to cheer for him right alongside them.
They all cheered loud enough, in that moment, that Eriksen probably could have heard them if he opened the window in his hospital room less than a mile away. He has remained there since Saturday, when he collapsed on the field in cardiac arrest during a Euro 2020 soccer match. And while Eriksen’s Denmark teammates returned to field on Thursday, falling to Belgium, 2-1, in an emotional match, he will remain in the hospital for a while longer.
On Thursday morning, Denmark’s team doctor said that Eriksen will have a defibrillator implanted to help prevent future heart episodes.


The device, an implantable cardioverter-defibrillator, or I.C.D., will be placed under Eriksen’s skin and monitor his heart rhythm. A combination pacemaker and defibrillator, the device tracks a person’s heartbeat and can send electrical pulses to restore a normal rhythm as needed.
“After Christian has been through different heart examinations, it has been decided that he should have an I.C.D. (heart starter),” the doctor, Morten Boesen, said in a statement released by Denmark’s soccer federation. “This device is necessary after a cardiac attack due to rhythmic disturbances.”
“Christian has accepted the solution,” it added.


The announcement came hours before Denmark took the field to play Belgium at the Parken Stadium, the same arena where Eriksen had collapsed during a game against Finland only five days earlier.
Eriksen was a constant presence at the match: Thousands of fans arrived wearing his No. 10 jersey, a giant replica of which was carried onto the field before the game to the cheers of fans of both teams. Eriksen was believed to be watching from his hospital room, close enough to hear the chants of his name.


Belgium was thinking of him, too. Its captain, Jan Vertonghen, one of several former club teammates of Eriksen’s in Belgium’s team, arrived for the pregame coin toss with a framed team jersey signed by its players. Vertonghen, who played with Eriksen for several years at England’s Tottenham Hotspur, presented it to his Danish counterpart, Simon Kjaer.
Denmark’s players formed a tight circle in the moments before kickoff, steeling themselves for what lay ahead. Two minutes into the match, a week’s worth of emotions were released when Yussuf Poulsen fired a low shot into the net to give Denmark a 1-0 lead.


In the 10th minute, Belgium’s players kicked the ball out of play to stop the game as a tribute to Eriksen, joining the crowd for a standing ovation for nearly a minute. Several Belgian players, including striker Romelu Lukaku, Eriksen’s attacking partner at the Italian champion Inter Milan, have played alongside Eriksen for European club teams.
“All of Denmark is with you, Christian,” read a long banner in Danish that was unfurled in the stands behind one goal.


Medical officials did not address Eriksen’s possible return to the sport in their statement on his treatment.


Another player taking part in the Euros, Daley Blind of the Netherlands, had a similar device implanted in 2019 after two in-game collapses, although it was not known how directly comparable his condition is to Eriksen’s. Blind and Eriksen are friends and former teammates at the Dutch powerhouse Ajax Amsterdam.


Eriksen, 29, collapsed on the field late in the first half of a game on Saturday, and then received lifesaving treatment, including C.P.R., as his teammates and fans at the game in Copenhagen — and a global television audience — looked on in shock. After a delay, the game was restarted, a decision that has been heavily criticized in Denmark, including by the team’s current and former players and its head coach. Finland went on to win, 1-0.
Eriksen released a message and photograph from the hospital on Tuesday thanking fans for their good wishes, saying, “I’m fine, under the circumstances.”


Manager Kasper Hjulmand of Denmark said he expected that Eriksen would watch the game from the hospital. After the loss to Finland, the game was critical for Denmark’s hopes of advancing at the tournament.


The storybook start held for a half before Belgium’s talent changed the game. Thorgan Hazard tied to score in the 55th minute, and Kevin De Bruyne added a second 15 minutes later. Like Hazard, he tempered his celebration, most likely out of respect for Eriksen, and because his goal ushered Denmark perilously close to the tournament’s exit door before a visit from Russia in the teams’ final group game on Monday.


“We know everything is still possible,” forward Martin Braithwaite said.
Kjaer, the Denmark captain, had been among the first to reach Eriksen when he collapsed on Saturday, and he appeared near tears as he warmed up for the restart 90 minutes later. Kjaer was substituted in the second half of the match, but was returned to the starting lineup against Belgium.
Before the game, he released a statement to fans in which he said the team would “enter the pitch against Belgium with Christian in our hearts and thoughts.” But he also made clear that the team had work ahead.
“It gives us peace in our minds, which allows us to focus on the game of football,” he said of knowing Eriksen’s condition had stabilized. “We will play for Christian, and as always for all of Denmark. That is the greatest motivation for all of us.”