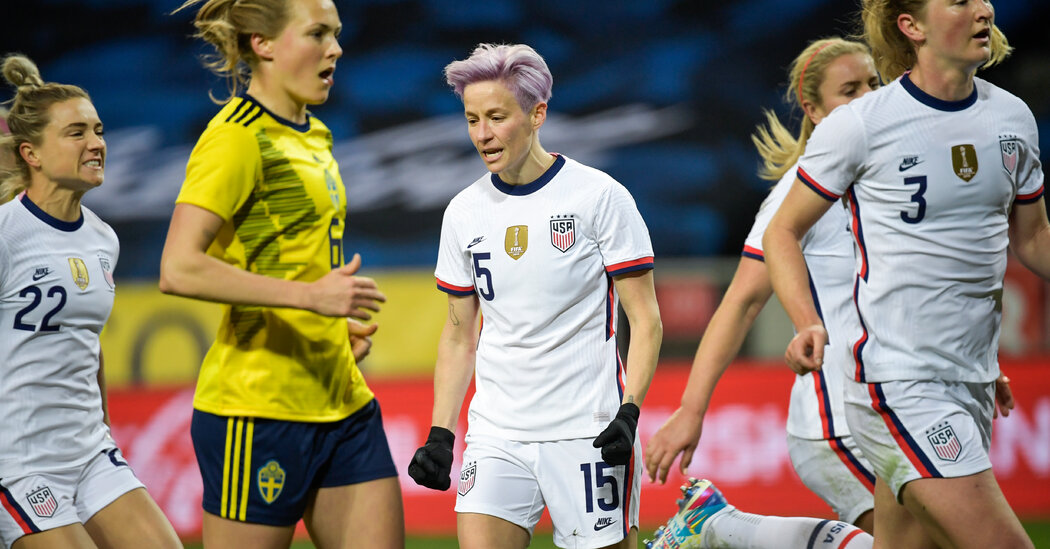 A federal judge on Monday approved a partial settlement in the long-running dispute over equal pay between U.S. Soccer and its World Cup-winning women’s national team, but the players’ fight with the federation is far from over.
The ruling by Judge R. Gary Klausner, of the United States District Court for the Central District of California, rubber-stamped an agreement on working conditions that the sides had reached last year. When he rejected the players’ core arguments about equal pay last May, Klausner let them continue their claims about unequal working conditions in areas like team flights, hotels, venue selection and staffing support.
Before they could pursue an appeal of their equal pay defeat, the players needed to resolve those issues. With that agreement now in place, the players said, they will return to the core of their legal fight: an appeal of Klausner’s ruling that dismissed their demands for pay equal to what the men’s team earns.


“Now that this is behind us, we intend to appeal the court’s equal pay decision, which does not account for the fact that women players have been paid at lesser rates than men who do the same job,” said the players’ spokeswoman, Molly Levinson.


The women’s players sued U.S. Soccer in March 2019, contending they had been subjected to years of unequal treatment and compensation. Twenty-eight members of the team filed the initial lawsuit, which later grew to include anyone in a larger class of players who had been part of the women’s team since 2015.
The players pressed their equal pay argument for years — through on-field protests, interviews and social media campaigns — as they piled up victories and two World Cup championships on the field. Then Klausner rejected them in a single devastating paragraph last May.
In that decision, Klausner ruled that not only had U.S. Soccer not paid the women’s players less than their men’s counterparts, but also that he had been convinced that “the WNT has been paid more on both a cumulative and an average per-game basis than the MNT” over the years covered in the case.
It is unclear how long an appeal of his decision could take, or even whether it will be decided in a courtroom or at the negotiating table.


The women’s team’s collective bargaining agreement expires at the end of December. While the women won significant gains in their current agreement, the largest gap in compensation between men’s and women’s players remains the World Cup bonuses paid by FIFA, world soccer’s governing body. The bonus pool at the last men’s World Cup was $400 million, compared with $30 million for the women’s event a year later.
While noting that it has no control over those payments, U.S. Soccer offered again on Monday to pursue a negotiated settlement that might end a legal fight that has damaged both sides financially and emotionally, and that has forced fans of both U.S. teams to take sides.
“We expected the women’s national team to appeal the summary judgment ruling that determined U.S. Soccer has paid the USWNT fair and equitable compensation,” the federation said in a statement. “We remain hopeful that we can come to a resolution outside of the court system.”