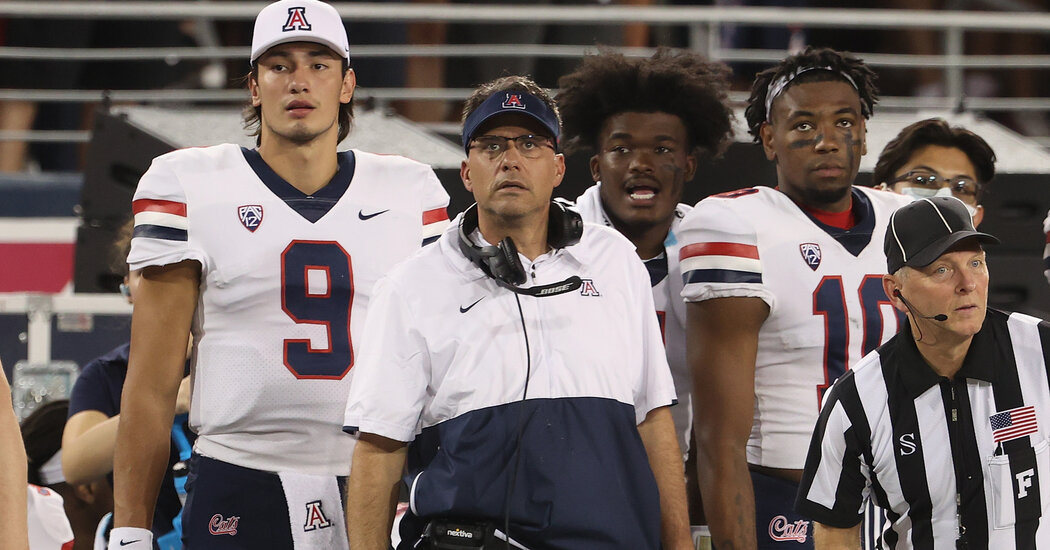 Asked what position she had hoped to play, Rachel Shamblott, a 5-foot-6, 135-pound freshman from Minneapolis, smiled and said: “Tight end — like Gronk.” (The All-Pro tight end and merrymaker Rob Gronkowski was an Arizona star.)
Two former high school soccer players said they were inspired by Sarah Fuller, the Vanderbilt soccer goalie who kicked for her university’s football team last year, to great acclaim. One of them, Nicole, a senior from Dana Point, Calif., who asked that her last name not be used, pointed to a loss last month to Northern Arizona, which plays in the lower tier Football Championship Subdivision. “Honestly, they couldn’t be any worse,” she said of the Wildcats.
That may not quite be true.
The Wildcats’ rock-bottom moment came last December when they were humiliated by rival Arizona State, 70-7. Kevin Sumlin was fired as coach within hours and replaced by Jedd Fisch, 45, a peripatetic career assistant who immediately began trying to nuzzle up to a community that was lukewarm over his arrival. He held video conferences with hundreds of former Arizona players — and became one of their biggest employers: former stars Ricky Hunley, Chuck Cecil, Brandon Sanders are assistants, and Tedy Bruschi, when he isn’t in ESPN studios, serves as a senior adviser.
Fisch was everywhere — on podcasts, TV shows, radio broadcasts, Twitter and around town speaking to boosters — trying to generate interest, even rolling down fraternity row before the home opener to hand out T-shirts. He helped generate $6 million that has already been spent renovating the football facilities.
The Wildcats (0-5) have been competitive against ninth-ranked Oregon and U.C.L.A., but what looked like a tangible opportunity to end the nation’s longest losing streak on Saturday at Colorado (1-4) became more remote when quarterback Jordan McCloud was lost for the season with a leg injury against U.C.L.A.