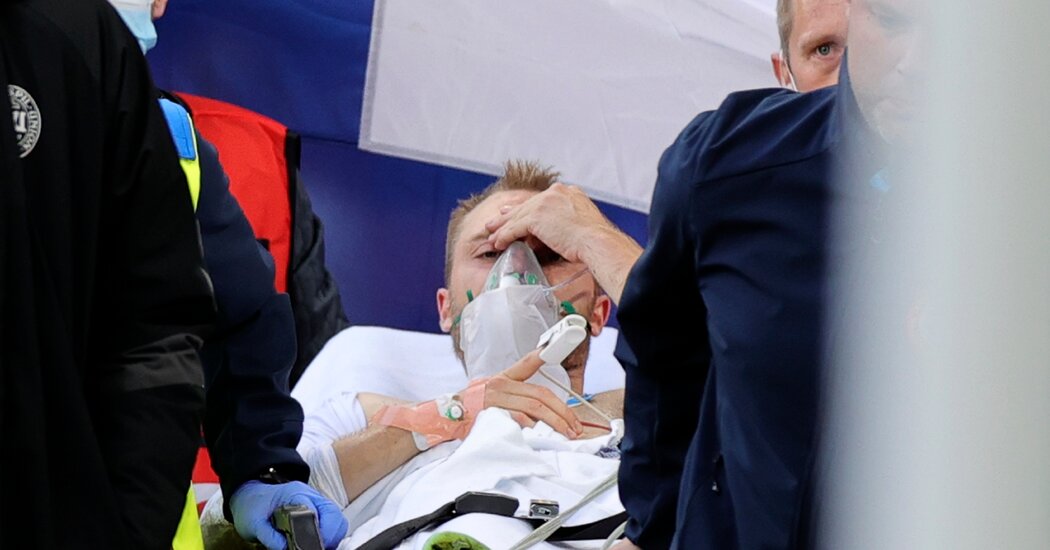 Christian Eriksen was in “stable” condition in a Copenhagen hospital, Denmark’s soccer federation said in a statement on Sunday, a day after he collapsed and received life-saving medical treatment on the field during a Euro 2020 match against Finland.
Eriksen had “sent his greetings to his teammates,” the statement said, but remain in the hospital for further examination.


The 29-year-old Eriksen is being treated at Rigshospitalet, which sits less than a mile away from Parken Stadium in Copenhagen, where the game was played.


Eriksen, an attacking midfielder and the creative engine of Denmark’s team, suddenly stumbled and collapsed to the turf in the 42nd minute of a game against Finland on Sunday.
Medical teams, summoned urgently by teammates and opponents who immediately sensed the severity of his condition, worked quickly to stabilize Eriksen on the grass. They continued for 20 minutes as the stunned crowd at Copenhagen’s Parken Stadium and a global television audience looked on.
In an effort to protect Eriksen, his teammates and members of Denmark’s staff formed a circle around him to shield him, and the medics, as they worked. Photographs of Eriksen leaving on a stretcher showed him awake.


The match was briefly suspended but resumed about 90 minutes later — with the consent of players on both teams, and only after the Danes had received word on Eriksen’s improved condition. Finland won, 1-0.


Not everyone was able to continue. A few players were in tears as they warmed up for the resumption of play. Not all of them could complete the game, Denmark’s coach, Kasper Hjulmand, said afterward.
“It’s a traumatic experience,” Hjulmand said. “The attitude was, ‘Let’s go out and try to do what we can.’ And then we talked about allowing to have all these feelings. And it was OK to say no if they weren’t able to play. Some of them said that they wanted to try. And I said no matter what feelings they had, it was all OK. You had to allow yourself to try to play the game if you felt like it. And you had to dare to show happy emotions. But it was OK to say no. Because some of them they weren’t able to, they weren’t able to play.”
Hjulmand told reporters that his team would be provided counseling and any other assistance it needs as it tries to navigate the rest of the tournament.
“We will spend the next few days processing this as best we can,” Hjulmand said.