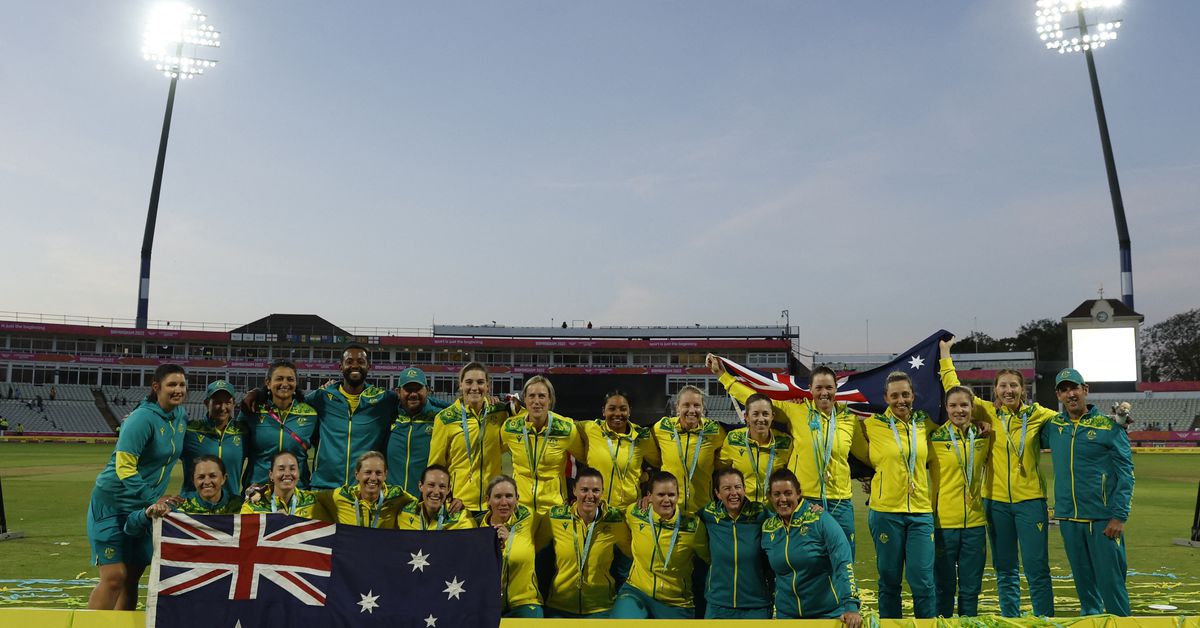 BIRMINGHAM, England, Aug 7 (Reuters) - Australia beat India by nine runs to claim the Commonwealth Games women's T20 cricket gold medal on Sunday but the real winner was the sport which delivered compelling competition and boosted its case to be included in the Olympics.

A part of the Commonwealth Games programme for the first time, women's cricket was one of the most sought after tickets in Birmingham particularly for Sunday's absorbing final between top ranked Australia and cricket-mad India.

"You just have to look how many people came out and watched every single game even when England wasn't playing," said Australia's Ashleigh Gardner. "It was amazing to see people just supporting women's cricket.

"I guess that was the best thing about this whole event was growing the game globally."

Chasing 162, India looked to be in control when they were 118-2 midway through the 15th over but suffered a collapse after losing three wickets in quick succession, including key player Jemimah Rodrigues (33) and captain Harmanpreet Kaur (65).

India's lower batting order could not keep up with the pressure and were bowled out for 152 in the final over, with Australians Gardner taking 3-16 and Megan Schutt 2-27.

It was yet another achievement for the dominant Australians, who won the last two T20 World Cups in 2018 and 2020 and the 50-over World Cup earlier this year.

"I think that match today was definitely worthy of a gold medal match," said Jess Jonassen.

Earlier on Sunday New Zealand took the bronze after they comfortably defeated England by eight wickets, thanks to an excellent bowling performance.

Hayley Jensen took 3-24, while Fran Jonas and Sophie Devine picked up two wickets each as England tumbled to 110-9 from their 20 overs.

New Zealand captain Devine then scored an unbeaten 51 to wrap up their chase of 111 within 12 overs.

"This Commonwealth Games has been an incredible experience," offered England captain Nat Sciver. "The crowds have shown that people really love coming to watch.

"I’d love for cricket to be in the Olympics."

So would the International Cricket Council (ICC) which is reportedly spending $3 million on lobbying efforts to get the sport onto the 2028 Los Angeles Olympics programme.

There could not have been a better advertisement for what cricket can bring to a multi-sport event than the sensational display put on at Edgbaston Cricket Ground.

With over 160,000 tickets sold, cricket was one of the Games' best attended sports and certainly among the most fun as Birmingham, one of Britain's most diverse cities, turned out in force to support their teams.

Cricket's Games future is unsettled although the women's T20 is almost certain to included on the 2026 programme when they are staged in Victoria, Australia.

Hamilton, the Canadian city that hosted the first Games in 1930 and bidding to stage them again 2030 for the 100th anniversary, already has cricket pencilled in on its programme.

Canadian bid chief Louis Frapporti told Reuters that it has secured a commitment for the construction of "a significant amount of cricket infrastructure".

"We have begun discussion that involves the provincial government which is very interested in cricket infrastructure and programming in Ontario," said Frapporti.