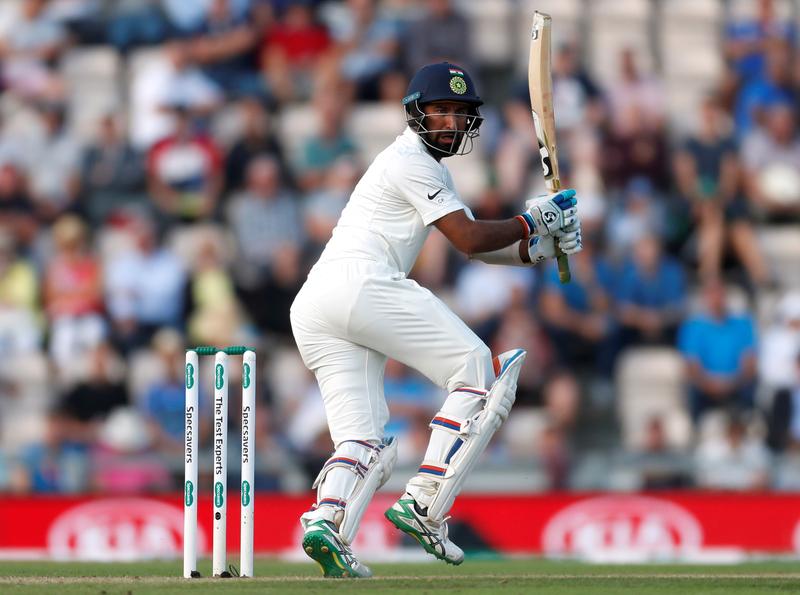 (Reuters) - India suffered a dramatic batting collapse the last time they played a pink ball test in Australia but top order batsman Cheteshwar Pujara is confident lightning will not strike twice when they face England in familiar home conditions.
FILE PHOTO: Cricket - England v India - Fourth Test - Ageas Bowl, West End, Britain - August 31, 2018 India's Cheteshwar Pujara in action Action Images via Reuters/Paul Childs
Going into the second innings of the first match in Adelaide in December with a slender lead, Josh Hazlewood and Pat Cummins tore through India’s batting order to skittle the tourists for 36 -- their lowest innings score in 88 years of test cricket.
The third test of the current England series, tied at 1-1, is a pink ball day-night affair in Ahmedabad’s Motera Stadium -- only the second time India will have played one on home soil.
“It’s a different ball game in Australia,” Pujara told reporters on Saturday. “The ball was seaming around a lot, we had one bad session which led to disaster. Overall, in the first innings we were still in a dominating position.
“Here we’re playing in familiar conditions, the ball is also different. We’re very confident that we’ll put up a good show and we’ll not look back at what has happened in the past.
“Experience doesn’t matter a lot playing one-off pink ball tests. It’s test cricket and we’ll have similar game plans we had in the last match depending on how the pitch is.”
Pujara was signed by Indian Premier League (IPL) side Chennai Super Kings in Thursday’s auction for what will be his first stint in the Twenty20 competition since 2014.
But the 33-year-old said county cricket was still on his agenda as he looks to prepare for the England series away in August.
“It’s good to be back in the IPL again,” he said. “At the same time, when talking about county cricket, I still have time before the England series. There’s a window after the IPL gets over where I can play a few county games.
“I’ll take a call (on heading to England) when the IPL gets over or midway through the IPL.”
Reporting by Rohith Nair in Bengaluru; Editing by Ken Ferris