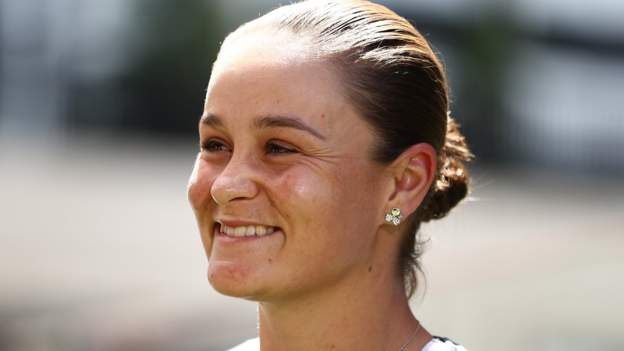 Last updated on .From the section Tennis

Former world number one Ashleigh Barty has fuelled speculation she may attempt a top-level career in a third sport by signing up to for a golf exhibition.

"It's such a unique opportunity to have fun, test yourself and compete," Barty told the Sydney Morning Herald.

"I hope through my participation in the series that we can encourage more women and girls to participate in golf around the world."

Barty, whose three Grand Slam singles titles include last summer's Wimbledon crown, is a keen amateur golfer with a reported handicap of four.

Her father Robert represented Australia as an amateur and had considered attempting to turn professional himself.

Barty played professional cricket for Queensland and Brisbane Heat in 2015 during a break from tennis.

She has previously suggested that she would not attempt similar in golf, telling the Courier Mail earlier this month that she "had a good laugh" about the speculation.

Barty is also writing a series of children's books, set to be released later this year.

The first event in the Icon Series will take place at Liberty National in New Jersey in June with further tournaments planned for Europe, Asia and Australia.