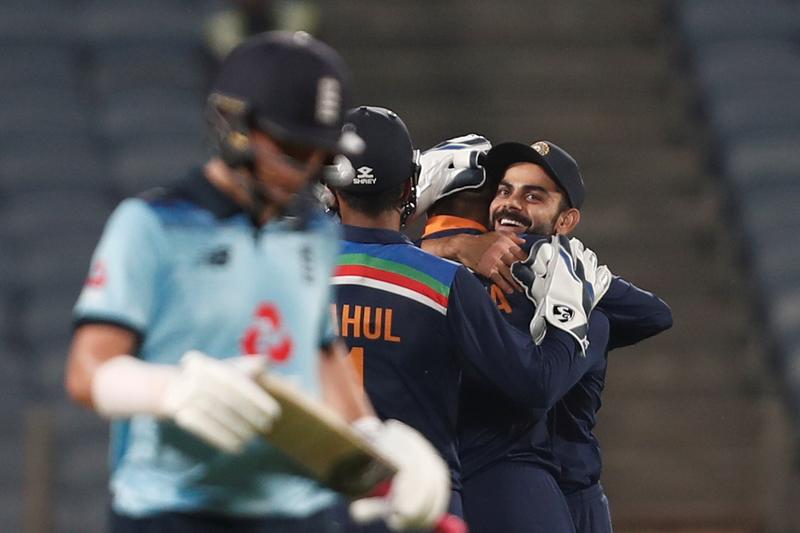 PUNE, India (Reuters) - India debutant Prasidh Krishna and fellow seamer Shardul Thakur combined to derail England’s chase and bowl the hosts to a 66-run victory in the one-day series opener in Pune on Tuesday.
Cricket - First One Day International - India v England - Maharashtra Cricket Association Stadium, Pune, India - March 23, 2021 India's Prasidh Krishna celebrates taking the wicket of England's Tom Curran with teammates and winning the match REUTERS/Francis Mascarenhas
Shikhar Dhawan made 98 but it was the blistering unbroken century-plus partnership between KL Rahul and debutant Krunal Pandya which helped India to a strong 317-5.
Jonny Bairstow led England’s robust reply with an incendiary 94 before the wheels came off their chase and the tourists folded for 251 in 42.1 overs.
India skipper Virat Kohli described it as a “sweet victory”.
“The comeback from all our bowlers was an amazing effort. I’m a really proud man. The team showed great character and intensity,” he said.
India fielded the Pandya brothers -- Krunal and Hardik -- while England had the Curran siblings -- Sam and Tom -- in their playing XI.
Put in to bat, India got off to a steady start with Dhawan and Rohit Sharma raising 64 runs.
Playing his first ODI since his man-of-the-match performance in the 2019 World Cup final, Ben Stokes dismissed Rohit to break the blossoming partnership.
Dhawan combined with Virat Kohli (56) in a century-plus stand before Mark Wood returned to dismiss the India captain and Shreyas Iyer in his successive overs.
Stokes dismissed Dhawan for 98 and the 300-mark looked beyond India when they slumped to 205-5 in the 41st over.
Rahul, who made 62 not out, and Krunal launched a spectacular late assault as India plundered 112 runs off the last 10 overs.
Krunal raced to a 26-ball fifty, the fastest by an ODI debutant, with his audacious strokemaking and finished on 58 not out.
FLYING START
England got off to a flying start with Bairstow combining with Jason Roy (46) in a free-flowing 135-run opening stand.
Debutant Krishna (4-54) finally ended the stand, dismissing Roy and Stokes, who made one, in his successive overs.
Eoin Morgan (22) came out to bat with four stitches in his right hand having split his webbing earlier while fielding.
The England captain could have been dismissed for a first-ball duck off Krishna but counterpart Kohli dropped him in the slip.
Bairstow smashed seven sixes in his 66-ball blitz but Thakur turned the match on its head with three quick strikes that also included the wickets of Morgan and Jos Buttler.
Cruising at 135 for no loss, England slumped to 176-5 and could not recover from there.
“We’ve done a lot of things right today,” Morgan said. “I thought the bowlers were outstanding, as were our two openers.
“We play an aggressive brand of cricket, we just need to execute better than we did today. This is the way we play and this is the way we’ll continue to play.”
The remaining two matches are scheduled on Friday and Sunday, both in Pune.
Reporting by Amlan Chakraborty in Siliguri, India; editing by Clare Fallon and Ken Ferris