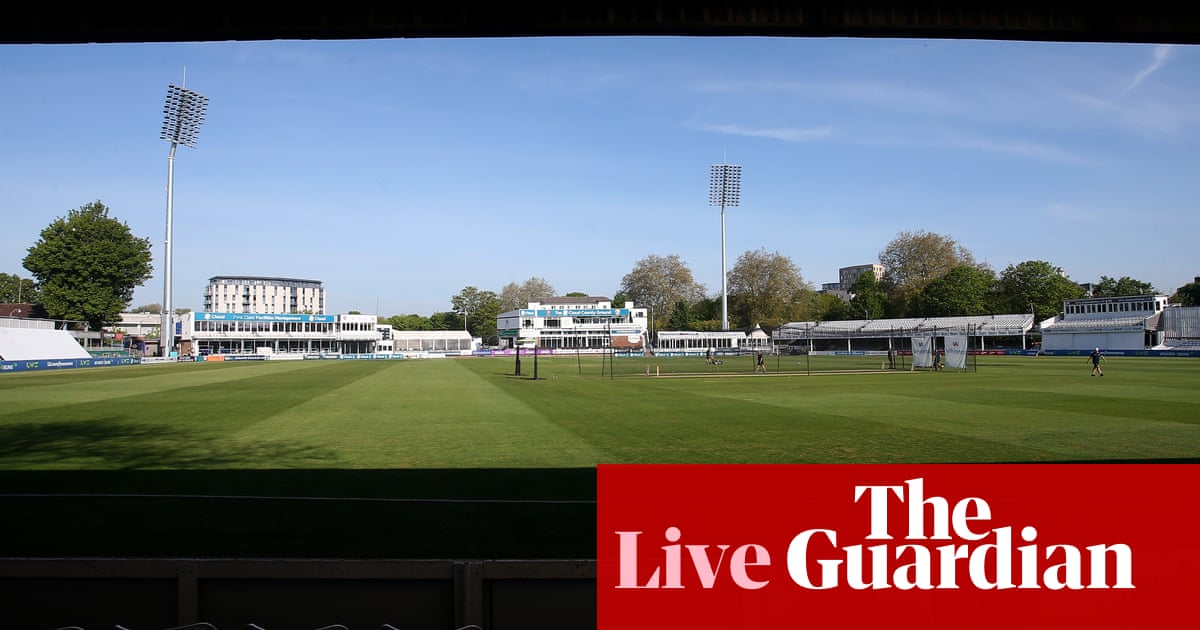 Something to mull over with your ginger snaps: ten of the driest Aprils have occurred this century, And with that, the ball after Wells belts a four, the umpires have a chat are they’re off for bad light. Lancs 127-0, the first century opening stand for Lancs since 163 between Keaton Jennings and Al Davies at Headingley last year.

Oh Division two, how we have neglected you since Stokes was out. At Sophia Gardens, Marnus’s match is getting worse, out for 17 after his 3-65 yesterday. Northeast and Carlson rebuilding nicely, in an unbeaten partnership of 81. Glammy 144-3. A second wicket for Ollie Robinson at Hove, Peter Handscomb’s non-domination off the CC continuing, unfortunatley. Middx, currently 86-4. And Worcestershire are being demolished with ball as well as bat. Matthew Potts 4-12 in a sorry 42-4.

Wells has just brought up Lancashire’s fifty with a thumping off drive off McAndrew, his seventh four in 34. Essex have suffered a mini-collapse, as Dom Bess picks up two more (including Walter for a career-best 141) at the Chelmsford thriller. Essex 339-7. Oh, Northants: 30-3, in reply to 401. Young, Gay and Vasconcelos all back in the pavilion. Oh, oh, Gloucestershire. Abbott, Abbas, Abbased: 54-5. Can Higgins and Lace save the day?

A rare moment of peace at New Road, the only sound coming from the cathedral bells, after Durham declare their innings on 580 for six following one of the most incendiary innings you’ll see from Ben Stokes - 161 from 88 balls - in his first outing since being named as England’s official Test captain. Like all good things it had to come to an end, Stokes eventually holing out after lunch attempting an 18th six and walking off to warm applause from the locals. Nay bother, his 17th - driven straight off Ben Gibbon’s first ball of the afternoon - had already secured the record for a County Championship innings, surpassing the 16 times that both Andrew Symonds (1995 Gloucs v Glam) and Graham Napier (2011 Essex v Surrey) sent over the rope. Five of the badgers came off a single over from Josh Baker in the morning, the sixth ball falling just short of the rope after a duff connection. And spare a thought for David Bedingham, whose excellent 135 was utterly eclipsed and on another day would be the headline performance. Fine catching from Worcestershire to send both of them packing but their task now is an uphill one. Good job they spent a day of their pre-season walking up the Malverns....

Ben Stokes leaves the field after being caught out for 161 runs. Photograph: James Marsh/REX/Shutterstock

Aye chihuahua ... this has been some innings from Ben Stokes at New Road ... and we’re pretty sure it’s the fastest century by a Durham batsman in first-class cricket, coming from just 64 balls. Stokes strolled out in the third over of the day and 90-odd minutes later sits 131 not out from 74 balls, having smoked 14 (FOURTEEN) sixes and missed out on the hallowed six sixes in an over when he didn’t quite connect with the final ball from 18-year-old Josh Baker and it went for a one-bounce four. David Bedingham was 81 not out when Stokes arrived ... he’s currently 115 not out and Durham are 529 for four after 120 overs.

Ben Stokes appears to have had his Ready Brek this morning, bringing up an unbeaten half-century from just 47 balls with five fours and three sixes - all but one of them utterly crunched. Poor old Ed Barnard has been launched in the direction of the hotel a couple of times to spark a conference out in the middle. And at the other end David Bedingham has just brought up his 13th first-class hundred from 120 balls, with 14 fours and one six. Beautifully correct innings from the right-hander, who started out on 69 first thing. Durham secure maximum batting points with ease, too, with the score on 438 for four in the 112th over.

Captain, my captain: Ben Stokes cracks another on the way to fifty. Photograph: David Davies/PA

After an hour’s play, a trip round the Division One grounds: At Old Trafford, Dom Sibley looks like he is going to carry his bat, Warwickshire, 302-9. One difficult chance has gone begging this morning, a drop, Hannon-Dalby, at short leg At Chelmsford, Essex grind on, Walter moves to his maiden first-class hundred. Well played! Essex 270-3. Hampshire are all out at the Rose Bowl, for 342. Van Buuren 3-53, Amir 3-57. Roll-up for the Abbot, Abbas and Barker show. And Northants are still fighting to grab the last two Surrey wickets, 315-8. Atkinson and JOverton have put on 44 for the ninth wicket.

Among the first public pronouncements from Ben Stokes in his new role as England’s Test captain was a desire to bat at No 6 and thus maximise his impact as an all-rounder. As such, he plumped for the same berth when making his first appearance of the summer for Durham at Worcestershire. On a tranquil opening day at New Road this meant sitting on the balcony of the Graeme Hick pavilion and watching others make hay in watery sunshine, however. The visitors won the toss and reached a commanding 339 for three courtesy of Sean Dickson’s third hundred of the season. After Dickson’s organised 104 from 184 balls came unbeaten half-centuries for Scott Borthwick (80) and David Bedingham (69). Ed Barnard struck twice as the hosts plugged away dutifully – including England’s Alex Lees, bowled off the inside edge for 27 – while debutant Ben Gibbon claimed his maiden first-class wicket when South Africa’s Keegan Petersen edged behind on 50 in the afternoon. Gibbon, a 21-year-old left-armer, signed for Worcestershire at the end of last season after combining league cricket in Cheshire with a job in construction. “It is hard graft and I’m happy not to have to do it any more,” he said at the time, perhaps not realising how challenging the pitches at New Road can be. At muggy Old Trafford, Dom Sibley chugged to a selectorial elbow-nudging century, batting all day for his 118 not out. A combination of quite glorious drives, with the high elbow just so, and inelegant nudges, it was his first century for Warwickshire since he made twin hundreds against Notts in September 2019. An inveterate fiddler between deliveries, adjusting waistband, trousers and box, Sibley looked in no strife against the Lancashire attack as, after a slow start, he stepped onwards, all that winter practise, and the decision not to tour with the Lions, coming to fruition. His hundred came with a squeeze into the offside, followed by appreciative banging of the balcony by his teammates and a sweaty hug with Chris Benjamin, who was lbw shortly afterwards for 47. Very nicely done: 227 balls, 13 fours. Two hundred miles away, Rory Burns, another dropped England opener, was doing something similar, off 245 balls. Anchoring an innings for Surrey that did not get going at the other end until Sam Curran came in and, with a gentle evening murmur passing slowly around the Oval, hit Northamptonshire’s Simon Kerrigan back over his head for six. To complete the circle, Alastair Cook made an even slower hundred for Essex, after they rebuilt from the ruins of nought for one with the first 34 deliveries of the day Yorkshire sent down being dot balls. Cook faced seven bowlers during his second hundred of the year, including Joe Root, playing for Yorkshire for the first time since resigning the England captaincy. A run-heavy day for Sussex against Middlesex, with yet another opening century, this for Tom Alsop, on loan this season to Sussex from Hampshire; while the 21-year-old Ali Orr was dropped three times, before being caught at slip on 99 just before tea. There was confused delight when Cheteshwar Pujara was dismissed for 16. At the Rose Bowl, Felix Organ scampered to a hundred, and James Vince 78 for Hampshire against Gloucestershire. Mohammad Amir finished with three for 51. At 152 for one, things were looking promising for bottom-of-the-table Leicestershire, but Glamorgan’s Marnus Labuschagne grabbed three wickets with his part-time spin, as they lost six for 117 after tea.

Hello! As I write this, there’s a distinct air of sogginess in the air, with rain forecast to sweep in from the north west later, pausing play at Old Trafford, Cardiff and New Road, but probably sparing the south. The wait for Ben Stokes continues this morning, with Ali poised at New Road with his fountain pen. There, Sean Dickson made a compact hundred yesterday, precipitating a glut of runs from openers round the grounds, a doffed hat to Dom Sibley, Rory Burns, Alastair Cook, Tom Alsop and Felix Organ. Time just to wonder which of the games will spring a surprise, moving out of the regular trot of yesterday, into a canter.