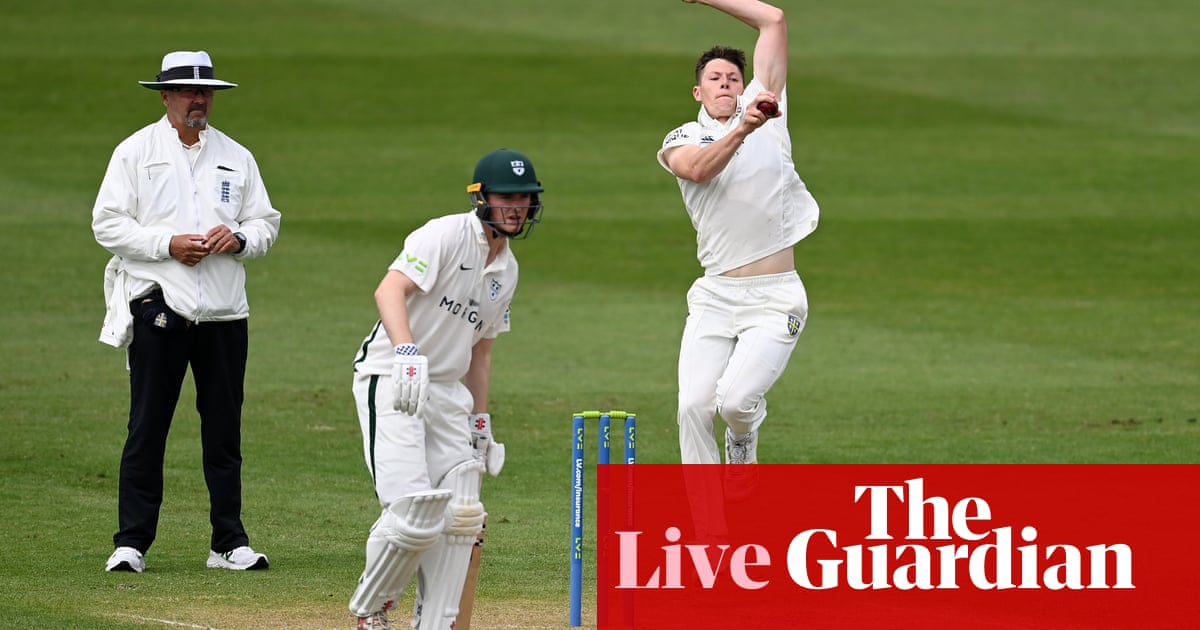 Can Lancashire afford to wait for the new ball? Warwicks 174-6. At Chelmsford, Alastair Cook duly moves to his second century of the game, the first time he’s ever done it in his first-class career.. Glamorgan have won and Hampshire are nearly there - just the one Glocs wicket to go. I’m going to write up now, but keep an eye on things for me.

In Division 2, Glamorgan are nearly there. Sam Robson has moved to a hundred at Hove as Middlesex wave off Sussex. Fifty to Peter Haandscomb. A match-saving partnership of 178. And a hundred to Jack Haynes at New Road, which also looks as if it will drift to a draw. 243-3. For Azhar Ali, runs at last, 92 before becoming Chris Rushworth’s third.

Hello Em Jackson! Lovely to hear from you. “Well after an agreeable Sunday lunch I’m pleased that both my South-West side and my North-east side are still both in the chase.

As for Chris Gayle - “my fans still want me” that’s all well and good, but surely there’s no one player bigger than the team?” There’s no I in Chris Gayle. Oh, hang on a minute...

Things are afoot at The Rosebowl. Mohammad Abbas to be precise. Two quick wickets to follow lynchpin Hammond being pinned by Barker. 219 for seven, an unlikely 149 to win. Ooof and that’s out! Yates flummoxed by one that swung in and kept low. Warwicks 132-4, the lead 86.

Things drifting from dozy toward sleepy in Manchester, but there are still irons in the fire. At the Rosebowl, the Gloucester win is ON - 167 needed, six wickets in hand, Hammond still there, 67 not out. Lloyd and Laubschagne cantering towards victory in Cardiff - actually bin that, Labuschagne has been gotcha’d by Parkinson (C) - his second of the innings. Just 13. Glammy 59-2, need another 91. Robson and Handscomb holding on at Hove, Middx 56-1. And an intriguing one at New Road where Worcs need to keep Durham out for another two sessions/put together 256, with eight wickets still in hand. Stokes 0-31.

In Division Two, things are hotting up: Sussex have declared and Middlesex have already lost a limb, 8-1, Stoneman lbw to Beard for one. Wishing Handscomb good fortune. A noble effort by Leicestershire at Sophia Gardens, who have only lost a wicket his morning, Mike for a plucky 64. Now 248-8, still a mountain behind. And Worcestershire too! Fifties for the down-on-his-luck Azhar Ali and Jack Haynes. 157-2, they need another 285 to win/ two and a smidge sessions to survive.