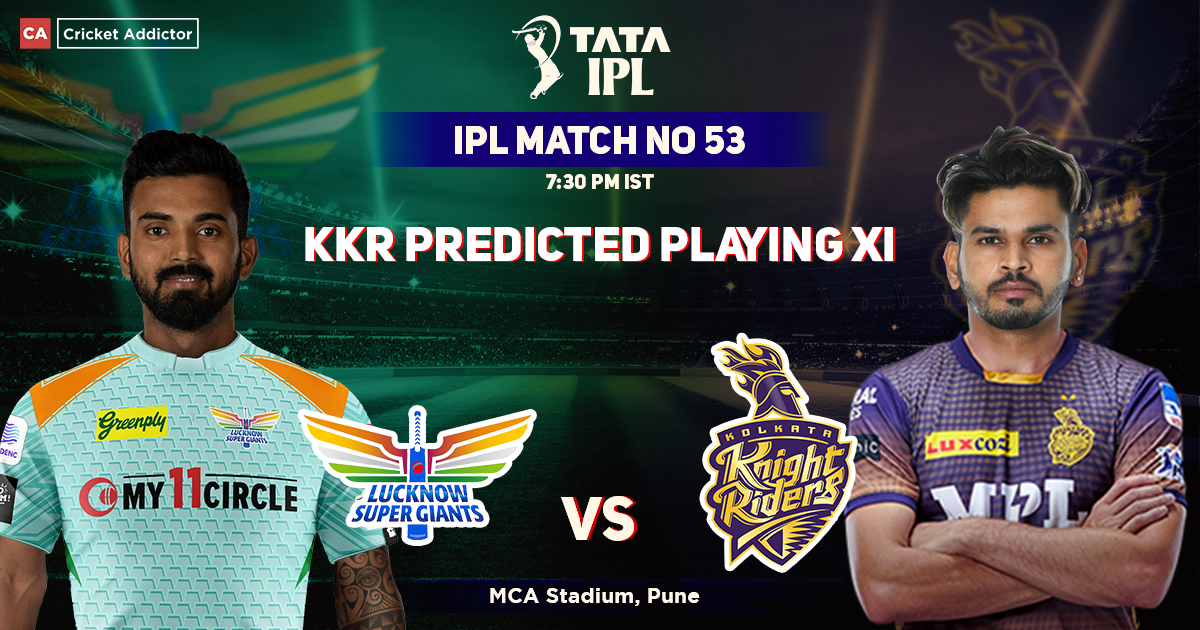 IPL 2022 is nearing the crucial phase with every team fighting hard to keep their chances and hopes of qualifying for the next stages- the playoffs alive. Lucknow Supergiants is comfortably at the second spot and will look to get more points soon to qualify for the play-offs as soon as possible.

Kolkata Knight Riders on the other hand are struggling in the 8th place and they ended their 5-match losing streak with a victory in the last game against Rajasthan Royals. They need to win this match to keep their qualification hopes alive and a loss might push them out of the competition.

KKR’s opening woes continue as they slumped to 32/2 in the powerplay against RR with both openers dismissed cheaply. Nitish Rana (48 runs) and Shreyas Iyer (34 runs) rebuild their innings and kept the chase on track before Rinku Singh‘s 23-ball 42 runs took them over the line comfortably. Andre Russell, Sunil Narine, and Anukul Roy form a strong lower-order batting unit for KKR.

Umesh Yadav was superb with the ball and finished with figures of 4-1-24-1. Sunil Narine and Anukul Roy were very economical and gave just 47 runs in their combined 8 overs. Tim Southee and Shivam Mavi claimed 3 wickets between them but gave runs at a higher economy rate last night. Lucknow Supergiants and Kolkata Knight Riders have never squared off against each other. This would be their first meeting of the season.

Australia’s limited-overs skipper Aaron Finch has been really careless with his shot selections playing for KKR. He has literally thrown his wicket every now and then and this hasn’t gone well with the team. KKR’s bowling unit looks settled even without the likes of Pat Cummins and Varun Chakravarthy. The team is expected not to tinker with their bowling combination.

Kolkata Knight Riders signed Aaron Finch as a replacement for England batter Alex Hales for the IPL 2022. Aaron Finch is Australia’s maiden ICC T20 World Cup-winning captain in 2021. Aaron Finch, who has played more than 80 IPL games and has over 2000 IPL runs, joined KKR at the price of INR 1.5 crore.

When it comes to IPL, Aaron Finch is no stranger having played for eight other franchises since his IPL debut in 2010. He debuted for KKR against Hyderabad but scored only 7 runs. He though scored 58 in 28 balls against Rajasthan in a losing cause. He has scored only 72 runs so far in 4 innings in IPL 2022 averaging a mere 18. He may be replaced by uncapped Abhijeet Tomar or experienced Ajinkya Rahane if KKR wants to play Mohammed Nabi to bolster their bowling resources. Sam Billings is also an option.