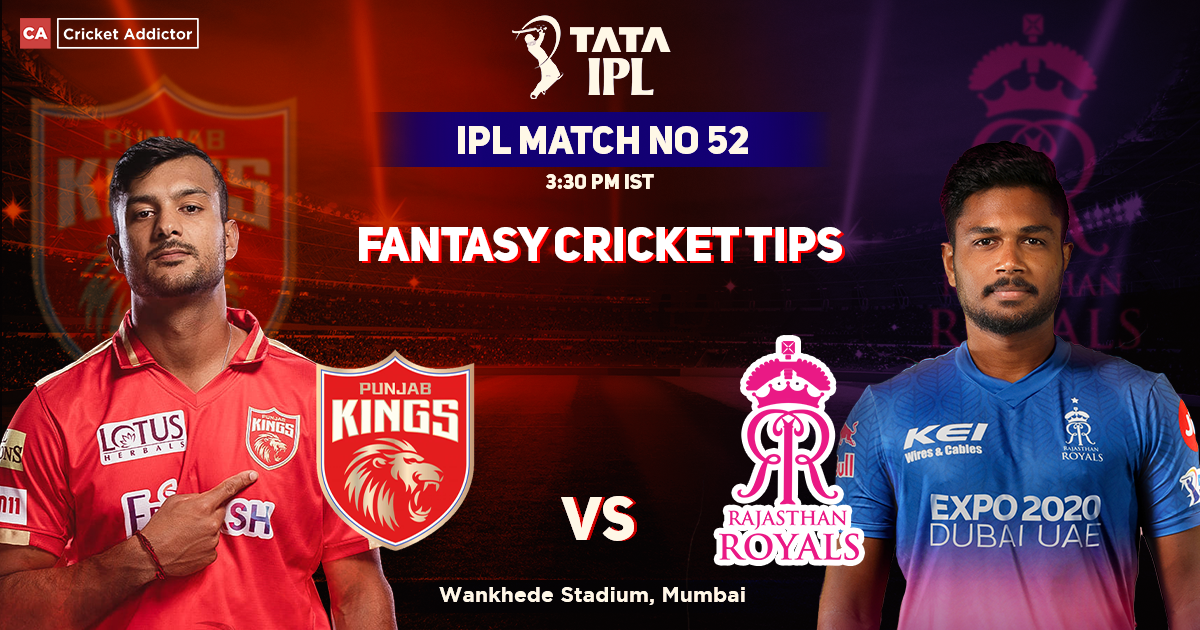 They will play against each other for the first time in this season of the Tata IPL.

The 52nd match of the Tata IPL 2022 will see Punjab Kings facing off against Rajasthan Royals on 7th May at the Wankhede Stadium, Mumbai.

For all the Dream11 Tips and Fantasy Cricket Live Updates on PBKS vs RR Dream11 Prediction, follow us on Cricketaddictor Telegram Channel.

This game is scheduled to start at 3:30 PM IST and the live-action can be viewed on Star Sports Network while the live scores can be tracked on the CricketAddictor website.

The fifty-second match of the TATA IPL 2022 will see the clash between Punjab Kings and Rajasthan Royals.

Punjab Kings will be squaring off against Rajasthan Royals for the first time in the fifty-second match of this season of the Tata IPL.

Punjab Kings played their last game against Gujarat Titans where they won the game by 8 wickets. Shikhar Dhawan and Bhanuka Rajapaksa smashed 62 runs and 40 runs respectively for Punjab Kings in that game.

Sanju Samson and Shimron Hetmyer stacked 54 runs and 27 runs respectively for Rajasthan Royals in that game.

The temperature is expected to hover around 33°C on the matchday with 57% humidity and 23 km/hr wind speed. There are no chances of precipitation during the game.

The deck at Wankhede Stadium has always been good for batting. There is an even bounce on the track, and the shorter boundaries make the job even easier for the batters.

There will be a massive dew factor and both teams would want to bowl first after winning the toss. With the super-fast outfield, high-scoring games are always on the cards at Wankhede Stadium.

The average first innings score on this wicket is 175 runs.

The team batting second has great records here. They have maintained a winning percentage of 60 on this ground.

Shikhar Dhawan is a left-handed batsman from Punjab Kings. He has stacked 369 runs in this tournament so far and can make a significant impact once again in this match.

Kagiso Rabada is a left-handed batsman and right-arm fast bowler from Punjab Kings. He has picked up 17 wickets in this tournament so far and will be an essential pick for this match as well.

Jos Buttler is a right-handed batsman from Rajasthan Royals. He has hammered 588 runs in this tournament so far and will be hoping to capitalize on the start here as well.

Yuzvendra Chahal is a right-handed batsman and right-arm leg-break bowler from Rajasthan Royals. He has hunted 19 wickets in this tournament so far. He will be a must-have pick for this game.

Shimron Hetmyer is a left-handed batsman from Rajasthan Royals. He has smacked 260 runs in this tournament so far and can play another crucial cameo in this match.

Mayank Agarwal and Kuldeep Sen are among the punt-picks here. The best-suggested fantasy/Dream11 combination for this game is 2-3-3-3.

Considering the team combination, Rajasthan Royals is expected to win this match.