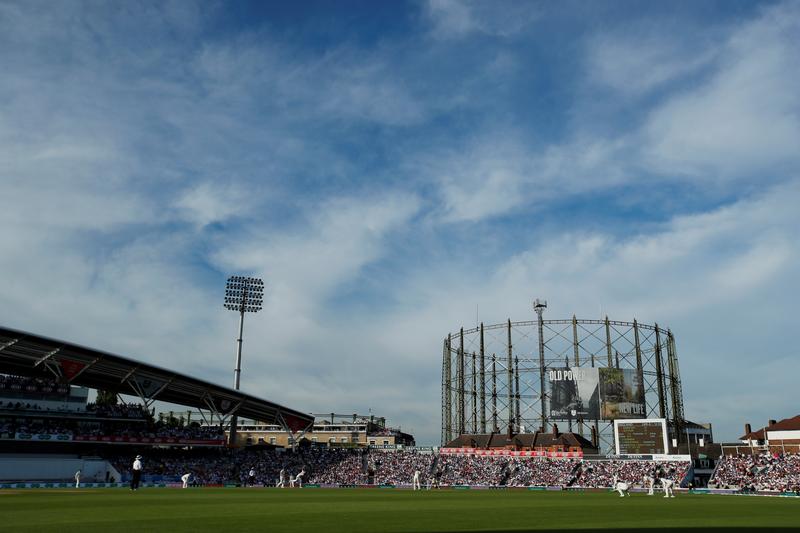 LONDON (Reuters) - The England and Wales Cricket Board (ECB) is “very confident” the end of year Ashes tour will go ahead as planned even though negotiations are continuing over travel and quarantine restrictions in Australia.
FILE PHOTO: Cricket - Ashes 2019 - Fifth Test - England v Australia - Kia Oval, London, Britain - September 14, 2019 General view during play Action Images via Reuters/Andrew Boyers
England will play the Twenty20 World Cup in the United Arab Emirates in October-November before heading to Australia and players who feature in both are likely to spend four months away from home.
England players are seeking assurances their family members would be allowed to join them in Australia and the ECB is currently in talks with Cricket Australia to secure that passage.
“All the right conversations are happening at government level in Australia and we will be using our own diplomatic channels in the UK to ensure that the view of the players and the ECB (is heard),” ECB chief executive Tom Harrison told British media on Thursday.
“It’s a conversation that’s going to take place over the next few weeks but I am very confident we will get to a place where we can fulfil our obligations to tour.”
Australia has closed its borders in an effort to control COVID-19, with limited flights and places in 14-day mandatory managed isolation for returning citizens and other exemptions.
Media reports claimed several England players might pull out of the series if their families were not allowed to join them, and the ECB was sympathetic to that demand.
“This is not players asking for anything unreasonable - these are very reasonable requests that we are asking the Australian government to give some leniency, frankly,” Harrison said.
“It’s going to be important for us to ensure that we can give comfort to players that their families are going to be able to be in Australia and that those conditions in which they are quarantined will be reasonable, enabling the players to be at their best in that test series.”
England are scheduled to play five tests in Australia between Dec. 8 and Jan. 18.
Reporting by Amlan Chakraborty in New Delhi; editing by Lincoln Feast.