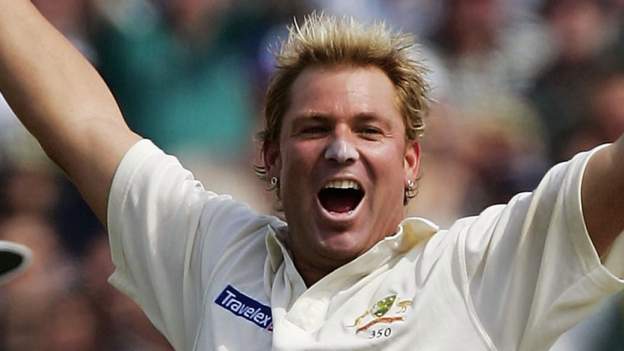 Australia Test captain Pat Cummins says Shane Warne was a "once-in-a-century cricketer" as he led the tributes to the iconic leg-spinner who died on Friday aged 52.

Known for his showmanship and charisma, Warne inspired a generation of fans and players alike.

"The game of cricket was never the same after Shane emerged," said Cummins.

"And it will never be the same now he has gone. So many of us in the playing group grew up idolising him and fell in love with this great sport as a result. Rest in peace, King."

Cummins added: "Shane was a once-in-a-century cricketer and his achievements will stand for all time, but apart from the wickets he took and the games he helped Australia win, what he did was draw so many people to the sport.

"Players all over the world owe him so much for what he has brought to cricket. He had a huge effect on all he met. He transcended cricket."

"There were other great cricketers who when you looked at their records would potentially equal Shane's or maybe in some cases even better them. But there was no greater star in cricket than Shane Warne," said Strauss.

"And you felt that when you went on the pitch against him - it was his show and you were just a small part of his show. He literally was the greatest showman."

Warne shot to prominence in astonishing fashion in the 1993 Ashes in England.

With his first ball of the series, he bowled Mike Gatting with a stunning delivery that pitched outside leg stump and clipped the top of off stump and later became widely known as the 'ball of the century'.

From there he went on to become arguably the best player in Australia's all-conquering side of the 1990s and early 2000s, winning multiple Ashes series and the 1999 World Cup.

He claimed 293 dismissals in 194 one-day internationals between 1993 and 2005, and in 2000 was chosen by Wisden as one of the five outstanding players of the 20th century alongside Sir Donald Bradman, Sir Garfield Sobers, Sir Jack Hobbs and Sir Viv Richards.

He also retired from first-class and List A cricket later that year, ending a seven-year spell with Hampshire, who he had captained since 2004. He continued to play Twenty20 franchise cricket until retiring from all formats in 2013.

England captain Joe Root added: "My experiences of Shane were of someone who absolutely loved the game of cricket.

"He was always a joy to be around, he gave so much energy to the sport. As a kid growing up he was a massive idol of mine and someone you wanted to emulate. The way he could win a game on his own, his skill levels were incredible.

"I'd have been 14 when the 2005 Ashes was on, in many ways that series was a massive influence on my career."

Former England spinner Phil Tufnell, who competed against Warne before later sharing a commentary box with him as a pundit, called the Australian an "absolute superstar".

"He emptied bars, when Shane Warne was bowling people came out and sat there and got involved in the game," Tufnell told 5 Live.

"He got people to fall back in love with spin bowling. Everyone wanted to be a spinner and a leggy when there was just a sea of fast bowlers.

"He had a fantastic cricket brain as well. I got to know him quite well off the field and he had a love for the game and knowledge for the game. Who could he help? What young spinner could he go and help and give some advice to?

"People say you are never bigger than the game but if anyone every got close to it I reckon it was Shane."

Australia's 2010 world snooker champion Neil Robertson said the news of Warne's death was like being "hit by a truck", adding: "All of Australia will be in mourning. He's our national hero, with what he did for Australian cricket and cricket all over the world.

"It's like when Diego Maradona died for Argentines. It's as bad as it gets and I just feel awful for his friends and family and cricket fans around the world."