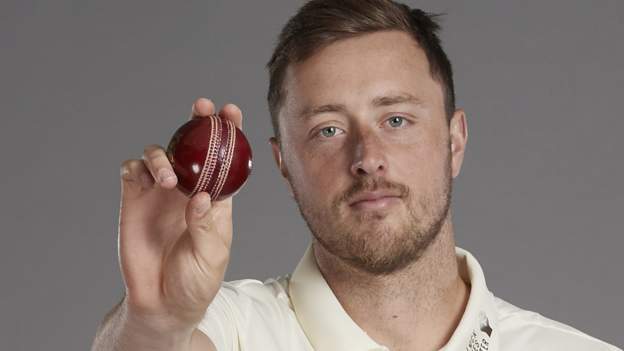 Even if we are sick of them, there remain some advantages to Zoom calls.

Baby Sienna, born in September, finds her feet with the help of the sofa, watched by Cooper the dog, who is contemplating an afternoon snooze.

Family involvement has been crucial in the cricketing development of Sussex's Robinson, a 27-year-old whose prolific wicket-taking in the County Championship has been built on metronomic accuracy, seam movement and bounce generated from his 6ft 5in frame.

His grandfather Rex was a stalwart of Margate Cricket Club in Kent, where his father Ian - good enough to bowl left-arm swing for England Over-50s - still turns out.

Robinson's mum, Sandra, has earned the nickname 'Richie Benaud' for the cricketing advice she dishes out to her son. Sandra is now married to Paul Farbrace, the former England assistant coach.

"My first memory of playing cricket was in the garden with my grandad. I was two or three years old," Robinson tells BBC Sport. "I had these white pads that were 10 sizes too big for me and I was trying to hit the ball over the fence.

"You won't find many people that watch as much cricket as my dad does. He's always texting me in lunch and tea breaks saying 'I think you should do this' or 'the field doesn't look quite right'.

"If I get out badly, I'll get a message from my mum saying 'that was a rubbish shot, wasn't it?' Literally two minutes after I've got out. Horrendous timing. Her and Dad took me everywhere. She has a right to give me some stick sometimes."

As well as family, Robinson's tale is one of setbacks, perseverance and a little good fortune.

As a youngster he was a batsman who bowled off-spin, only switching to pace as he grew taller in his mid-teens.

The off-breaks still get an outing every now and then; he bowled some spin in the nets on England's winter tour of India in an attempt to replicate the height of Ravichandran Ashwin.

Robinson played a handful of games for the Kent second XI before being released in 2012. After that it was his link to Farbrace that offered an unlikely route back into the professional game.

A coach with Yorkshire at the time, Farbrace was on tour in Barbados before the 2013 season, with the 19-year-old Robinson present on holiday. He took his bowling boots in case he was needed in the nets. Such was the impression Robinson made, later that year he made his debut for the White Rose.

Robinson played 10 games for Yorkshire, all in limited-overs cricket, primarily as a death bowler.

However, the desire to enjoy himself and a longing to be with his friends in Kent did not result in a suitable lifestyle for a young man trying to make his way in first-class cricket.

"We played a seconds game in Liverpool," explains Robinson. "Straight away I got into the car to go to Kent, a five- or six-hour drive.

"I stayed there for a night, saw my mates the next day, then left Kent at 1am to get to training at 9am.

"It was an unsustainable lifestyle that I was trying to live.

"At first they just thought I was a really bad timekeeper, but as it went on they realised what I was doing."

In July 2014, Yorkshire terminated Robinson's contract because of a "number of unprofessional actions".

"The relief I had when I realised I could go home was immense," he says. "It's not something most people say when you get sacked, but I could go home and didn't have to worry about the stresses of trying to live that way."

On the day Robinson was released, six counties contacted Farbrace to ask about his availability.

Robinson's initial plan was to take the winter off cricket but, after "six or eight weeks of going out two or three nights a week", he found he missed the game.

Asking his dad for help, Robinson hired a sports hall in Ramsgate for his own training sessions.

"I'd bat against the bowling machine, he'd give me throw downs or I'd bowl at him," recalls Robinson. "It was a one-on-one thing with my old man for four or five months until the season started.

"Getting sacked by Yorkshire was a blessing in disguise. It made me switch my life around and realise that I wanted to be a professional cricketer."

Renewed, refreshed and refocused, Robinson set about getting back into the game.

No stranger to second XI cricket and trials - as well as Kent and Yorkshire he has had time at Hampshire and Leicestershire - he was offered a contract by Essex, only to be coaxed to Sussex by then coach Mark Robinson, who promised he would play in the first County Championship match of the year.

Less than a year after being sacked by Yorkshire, Robinson marked his first-class debut with an unbeaten 110 batting at number nine against Durham, sharing a stand of 164 with the late Matthew Hobden.

Robinson took 46 first-class wickets in that 2015 season. When Mark Robinson departed to become coach of England women, Ollie stuttered under new boss Mark Davis and returned only 19 wickets in each of the next two years.

Davis was removed at the end of 2017, with Jason Gillespie - Yorkshire's coach during Robinson's time at Headingley - coming in. Rather than old wounds being reopened, it began Robinson's golden period as the scourge of county batsmen, en route to his England call-up.

The winter of 2017-18, spent in Australia playing club cricket and travelling with partner Lauren, was significant for a couple of reasons.

His Sydney club side, St George, produced Josh Hazlewood, the irony being Robinson's action is almost a carbon copy of the Australia pace bowler's.

"Josh gave me my cap on my debut for them," says Robinson. "I'd never met the guy, but we sat next to each other all 90 overs while we were batting, chatting bowling.

"I've spoken to him a few times since. He's one of the nicest blokes I've met."

At the same time, England were losing an Ashes series 4-0, with Farbrace part of the coaching team.

"I had Christmas lunch with the England party," says Robinson. "I knew a couple of lads from Yorkshire and others I'd played against.

"The following day I went to the Boxing Day Test. It was an unbelievable experience. The atmosphere - I've never heard anything like it. I've been to football matches and it's never been that loud."

Robinson took 84 first-class wickets in 2018 and another 64 in 2019, going on to star in England Lions' 'Test' win over Australia A at the MCG early last year.

In the Covid era, he has been a constant presence in enlarged England squads and is now vying with Craig Overton for the number eight spot for the two Tests against New Zealand.

"I don't regret anything that's happened in my career so far," says Robinson. "If I was to do it again, I'd try to learn quicker. I'm 27 now, so it's probably crunch time in international cricket for me."

Outside of cricket, Robinson says he rarely misses a Manchester United game, but his real motivation comes from fatherhood.

"I never thought I'd become a dad at quite a young age," he says. "That urge to do well, that you want Sienna to see her dad on TV, playing for England, has given me a little bit more drive. Hopefully, when she's a little bit older, she'll remember it."

Ending where the conversation began, Robinson is back discussing his family and the challenge of finding tickets for all of his loved ones should he make his Test debut in front of a crowd limited by Covid restrictions.

He says his dad is "fretting", while Farbrace, now the director of cricket at Warwickshire, has joked he could use his influence at Edgbaston to get his mum a job as a steward during the second Test.

And then there's his grandad, who never actually saw Robinson play the game before he died.

"I've got this, which was his," says Robinson, proudly holding a gold bracelet close to the camera.

"It was given to him when he was 18. My nan gave it to me when he passed away and I've never taken it off.

"He's always with me, wherever I go."