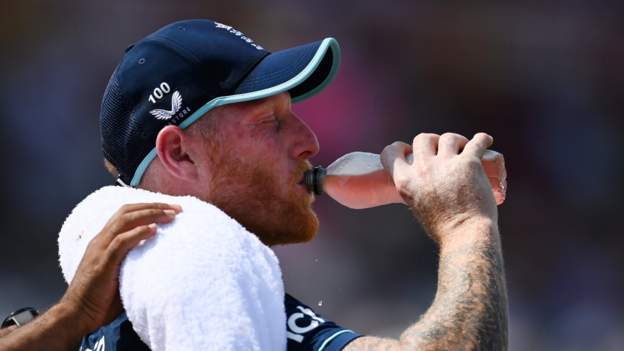 Ben Stokes' reluctant goodbye to one-day international cricket should have seen his every move applauded by his home crowd.

Most in Chester-le-Street were only thinking about one thing - relief from the relentless heat.

Much of South Africa's 62-run win over England in the first ODI was forgettable - that hints at one problem.

But delve deeper, this was a day cricket was dealt two warnings and neither are good for the sport.

As the UK recorded its hottest day on record, an England men's team was playing an international match on the 29th day out of the past 47.

Cricket in searing temperatures is not new.

The dials reached 38 degrees in the north-east on Tuesday but were as high as 47 when Joe Root was hospitalised after a day in the sun during an Ashes Test at Sydney in 2018.

Players have talked about training in a sauna to prepare themselves for conditions in Sri Lanka.

But this was one of the first times the heat has caused such an issue in England, remarkably at its most northerly international ground.

On the field there were ice towels, an increased number of drinks breaks and umbrellas to protect players from the sun.

England bowler Matthew Potts left the field after eight overs of his debut because he was "feeling effects of the heat".

But it was in the stands, or behind them, where the issue was more evident. Watchers of cricket in England are not used to this.

Spectators were scattered across pavements, others propping themselves up against a wall. Shade was more valuable than a good view of the middle.

When the queues for water fountains grew longer than for the bars, organisers went to a nearby shop to buy crates of bottled water, which was given out free.

Cricket has gained a lot of new vocabulary in recent years, such as bio-secure bubbles and Covid-19 protocols. The latest is 'cool rooms', which Durham introduced to give spectators somewhere indoors to shelter.

At one point in the afternoon there were discussions held between organisers and officials about the match continuing.

A number of spectators had to seek medical attention and there felt a distinct possibility of drastic action being taken.

The game continued and as temperatures cooled the crowd became more lively. Familiar songs were sung and Stokes was given a standing ovation when he was dismissed for the final time in ODIs.

But cricket, a sport with a size 13 carbon footprint that is also heavily impacted by climate change, has been given a glimpse of the future.

If there continues to be high emissions "we could see temperatures like this every three years", Met Office chief of science and technology Prof Stephen Belcher said on Tuesday as fires burned in London. Days like this could be the 'new normal'.

And so too could be a format without its superstars.

"We are not cars, you can't just fill us up and we'll go out there and be ready to be fuelled up again," he said.

The schedule is so intense one of the game's biggest stars is removing himself from part of it. That is a worrying prospect.

Team-mates and pundits have expressed sadness and understanding at Stokes' decision.

As this summer began, England were scheduled to play more than 100 days of men's cricket over the 12 months that followed.

In the past two weeks England have switched formats and opposition so quickly games condense into a blur.

The result was an international fixture between England and South Africa, squeezed into a calendar at bursting point, felt almost like a non-event - a feeling that will only get worse if too many future games are without England's biggest stars.

Cricket is nothing without its audience and its headline acts. It must heed these warnings.