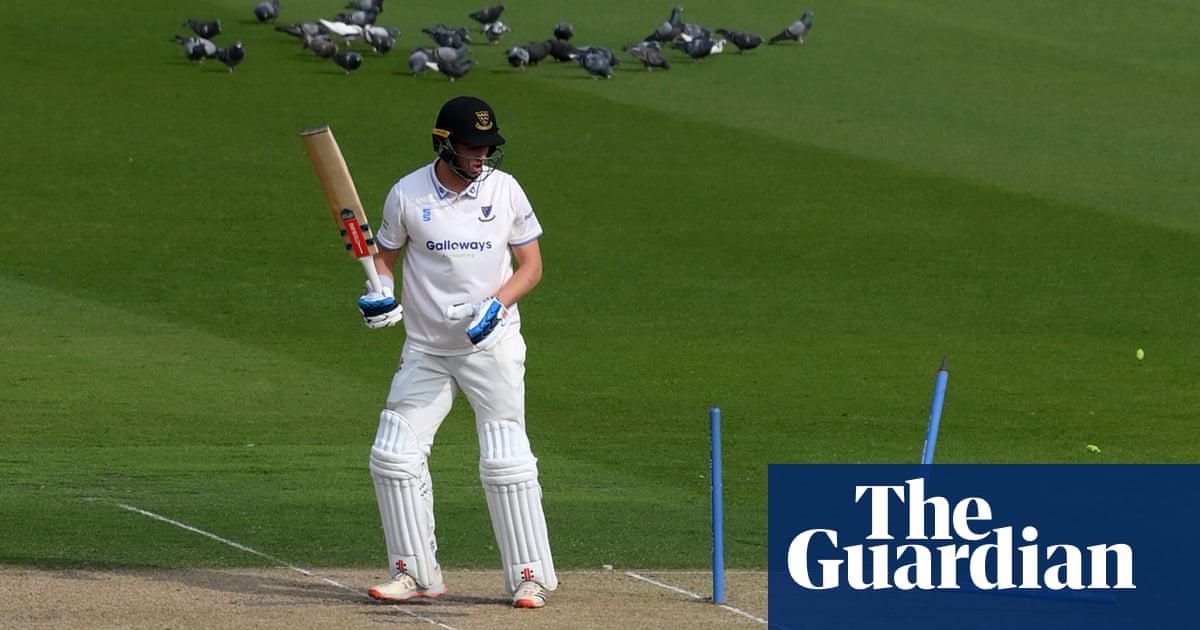 Having played out a draw on the deadest of tracks in the previous round at Bristol, Surrey were back in South London where a greenish strip was served up for play. Looking down, it was so green that Northamptonshire captain Ricardo Vasconcelos discounted the blue he saw looking up and decided to bowl. At 133-4, it didn’t look the worst decision, but Rory Burns had chased a few widish ones and missed (rather than nicked, as he had done so far this season) and was demonstrating again that his temperament can compensate for his shaky technique if he gets that bit of luck.

Sam Curran, under ECB instruction to limit his bowling, played as a batter and looked two classes above anyone else on show, the ball pinging off his blade with a very satisfactory twang. Without Jamie Smith and Ollie Pope, Surrey’s team looked a bit of a hotchpotch, but given any kind of platform, a late order of Colin de Grandhomme, Gus Atkinson, Jordan Clark and Jamie Overton are not all going to fail, and it was Atkinson and Overton who got in and biffed the home side’s score out to 401.

Northants’ batters were then impaled on their captain’s hubris, scoreboard pressure and a nipping pitch a tough gig. The seamers knew they just needed to keep it there or thereabouts and Rory Burns packed the slips for the inevitable edges. Surrey stay top of the Division One and look ominously well stocked with gamechangers.

The fourth day dawned with Gloucestershire requiring 257 for victory and Hampshire eight wickets – as ever, the draw also lurked in the shadows. There’s a generation of cricket followers who will look at that target and think that three an over with nine batters to get them favours the chasers, but that reckons without the second new ball and the relentless probing of Mohammad Abbas. Bowler-unfriendly 2022 ball or not (this column maintains it’s the sunshine that has provoked this glut of early season runs), the Pakistani craftsman took key wickets and the visitors, not without showing a bit of fight, came up 87 runs short.

His nine wickets in the match gave Abbas 22 for the season so far at 18, second on Division One’s wicket-taking ladder behind his countryman Hasan Ali. Young English bowlers could do a lot worse than watch these men bowl and listen to what they say, the tradition of Pakistan swing and seam in good hands.

Phil Salt and Dane Vilas were the only two batters able to make any kind of score at a strike rate above 50, the scoring rate for the match only a tick above two and a half an over. Whether such a match justifies a 14 versus 13 points haul is moot, the reward for a draw looking as unearned in a match like this as it looks earned in a last over thriller, 10 and 11 at the crease with five to get.

Ball four: Haines’ pain is good for the game

After Ali Orr and Tom Allsop had posted 204 for Sussex’s third wicket, a quartet of half centuries in the middle order retained a foothold in the match for the visitors. Inevitably, Cheteshwar Pujara led the charge to the Sussex declaration with 170 not out and Tom Haines was happy to give the ball to his bowlers half an hour before lunch with 369 in hand.

Haines is a young man who is in a little trough with the bat and this declaration won’t have helped his confidence. I hope wise counsellors are in his ear telling him that he did the right thing, despite the outcome. Setting 350 or so in two sessions (at Hove – a fast-scoring ground) will see Sussex win more than they lose. Moreover, every player will improve for the experience and the spectators will come back next week and next year. Who dares doesn’t always win, but better to dare and lose than never to dare at all.

Glamorgan’s first innings was boosted by 19 no balls donated by the Leicestershire attack in a match in which extras accounted for 130 runs, a contribution one might expect from a No 7. Professional cricketers, with the coaching and resources available to them, should not be conceding so many runs for free.