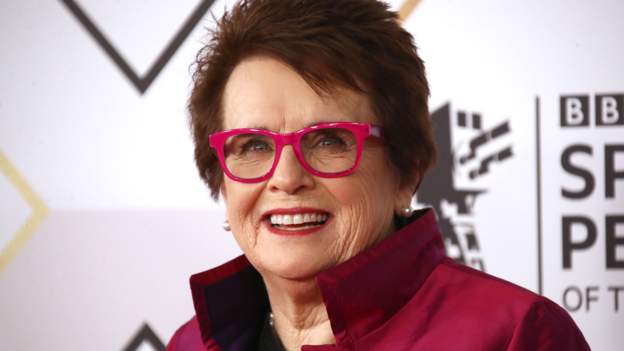 Last updated on .From the section Tennis

The Fed Cup is to be renamed the Billie Jean King Cup after the tennis great and founder of the Women's Tennis Association (WTA).

American King, 76, is one of the greatest female tennis players of all time and won 39 Grand Slam titles in singles and doubles competitions.

She is an advocate for gender equality and in 1973 won the Battle of the Sexes match against Bobby Riggs.

"It's very exciting. I'm still not sure it's true," said King.

"Then my mind always turns to what I want to accomplish - let's get going. It's really an honour and I'm very grateful."

It is the first time a major global team competition has been named after a woman.

"I remember the first Federation Cup in 1963," King added. I love history and I remember saying, 'We have to make it this year, we have to win the very first one, it's historical'. And [my team-mates] were like, 'OK, OK, already'.

"And we did win and it was really special. When I see the Fed Cup trophy today I look at the first one and I think about us. I remember how excited I was."

It was launched in 1963 and the United States are the most successful team in Fed Cup history having won the tournament 18 times.

King won seven Fed Cups as a player and four as the US team's captain.

"From playing the first Fed Cup as a member of the victorious US team in 1963, founding the WTA and becoming its first president, to being the first female athlete awarded the US Presidential Medal of Freedom, Billie Jean King has never stopped breaking new ground," said ITF president David Haggerty.

"Today she adds another 'first' to that list. The new name is a fitting tribute to everything she has achieved and will provide a lasting legacy that will inspire future generations of players and fans."

Kerry Washington explains why she became a startup investor

“Scandal” and “Little Fires Everywhere” star Kerry Washington won her first Emmy Award yesterday, but when she joined us at TechCrunch Disrupt today, she was much more focused on her work as an investor.Washington traced m...continued