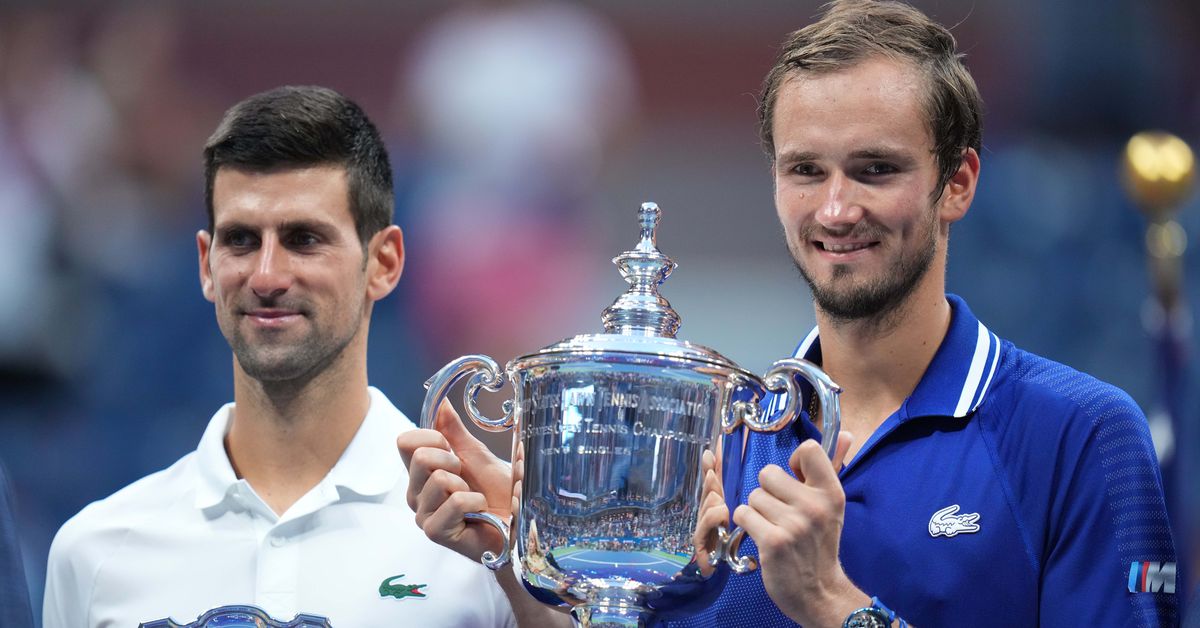 Sept 13 (Reuters) - The coronation of new champions Emma Raducanu and Daniil Medvedev left tennis fans salivating at the prospect of what is to come as the curtain dropped on Grand Slam tennis for another year at the end of the U.S. Open on Sunday.

The fans were back at Billie Jean King National Tennis Center after last year's COVID-19-enforced lockout and they witnessed drama worthy of any stage at the Broadway theatres only a few miles away.

Novak Djokovic had inevitably been given top billing because of his quest for a calendar-year Grand Slam and a 21st major title to break the three-way tie with Roger Federer and Rafa Nadal as the most successful men's player of all time.

In the second week, however, he had to share the spotlight as two new tennis stars emerged in the women's draw.

Teenagers Raducanu and Leylah Fernandez -- born two months apart in 2002 -- generated frenzied hype as they swept all before them on unlikely runs to the title decider.

Raducanu, having battled her way through qualifying at only her second major, emerged triumphant in the final act on Saturday with a dominant victory that captivated millions back home in Britain and around the world.

The manner of her triumph, and the fact she had reached fourth round on Wimbledon grass on her Grand Slam debut, left many wondering if Raducanu might possibly be the dominant champion women's tennis craves.

Canadian left-hander Fernandez had the harder route to the final, beating three top-five players and multiple major champions, and did more than enough to suggest she will not be a flash-in-the-pan.

"Who knows what's going to happen when the target's on their backs, or with this level of attention? I hope they take everything slow. I hope they have good people and a good team around them."

Those concerned at how Raducanu and Fernandez will deal with the attention need only to point to Naomi Osaka, who announced her arrival on the big stage with her U.S. Open triumph in 2018.

Still only 23, the four-times Grand Slam champion continued to struggle with the mental health issues she suggests were triggered by the massive burden of expectation on her.

The former world number one and defending champion bowed out limply in the third round and said she was unsure when or where she would play again.

Without the pulling power of Federer, Nadal and 2020 champion Dominic Thiem -- all absent through injury -- it was left to the young guns to provide the excitement in the men's draw too.

Spanish teenager Carlos Alcaraz played his part, sending third seed Stefanos Tsitsipas packing in the third round and becoming the youngest player in the Open era to reach the quarter-finals.

A record-equalling 34 matches in the main draw went to a deciding fifth set as players strove to make the most of a more open field.

"I definitely think guys are trying extra hard, because there is no Roger, Rafa," said American Frances Tiafoe. "I see guys foaming in the mouth, pretty funny to watch, I'm in the locker-room cracking up."

Djokovic, the sole representative of the "Big Three", was certainly challenged but carved his way steadily through the draw to his date with destiny on the blue court of Arthur Ashe Stadium.

The 34-year-old had dismissed Russian Medvedev in straight sets at the Australian Open to win the first leg of what he hoped would be a first calendar year Grand Slam by a male player since 1969.

On Sunday, however, Medvedev tore up that script with a brilliant performance to deliver what could prove to be a breakthrough moment in men's tennis.

Thiem last year was the first player outside the Big Three to win a major since 2016 but the Austrian had not needed to beat either Djokovic, Federer or Nadal.

Djokovic will hope it was just a blip and few would bet against him resuming normal service at January's Australian Open, where he will be seeking a record 10th title.

The three-times U.S. Open champion, however, will not be leaving New York without precious memories.

As defeat approached on Sunday, the world number one was reduced to tears as he received something almost as sweet as silverware -- the sort of ovation reserved for a great performer who has graced a stage with distinction for many years.

"I did not know, I did not expect anything, but the amount of support and energy and love I got from the crowd was something that I'll remember forever," he said.

"The emotion, the energy was so strong. I mean, it's as strong as winning 21 Grand Slams. That's how I felt, honestly. I felt very, very special."

Reporting by Sudipto Ganguly in Mumbai; editing by Nick Mulvenney and Ed Osmond