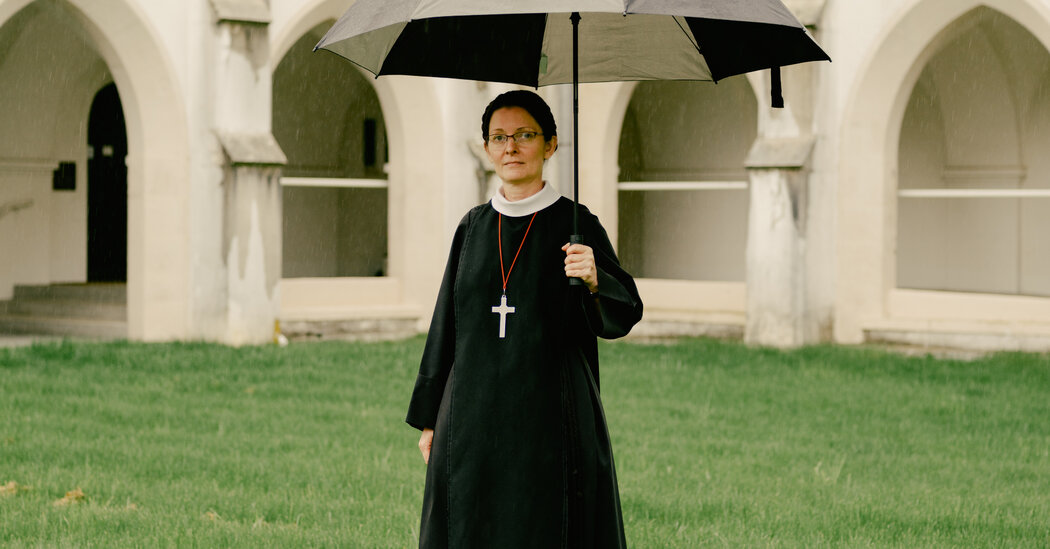 Before she entered the Community of St. John Baptist in 2012, Claudette Monica Powell performed in an acoustic rock duo and an improv comedy troupe in Los Angeles. Now she goes by Sister Monica Clare, sings in a church choir in Mendham Township, N.J., and posts matter-of-fact videos about convent life on TikTok.
“Most people have no idea that there are Episcopal nuns,” she said. On , she answers questions about religious rituals (“What’s up with the ashes?”), posts animal videos and teaches her sizable audience about Episcopalian values like gender equality and inclusion. (Offline, she has marched in Black Lives Matter protests and showed her support for women’s rights.)
“I keep telling the other sisters, ‘Get on TikTok!’” said Sister Monica Clare, who at 56 is the youngest in her community. “‘If we’re hidden, we’re going to die out.’”
Her approach isn’t altogether novel: Nuns have appeared on screens nearly since the dawn of television. Mother Mary Angelica, Mother Teresa, Sister Helen Prejean and Corita Kent have all leveraged mass media to spread messages about their spiritual and political beliefs. In 2014, an Italian Ursuline nun named Cristina Scuccia won “The Voice” in Italy and got a record deal.


And, of course, there have been plenty of fictional nuns who have captured the public’s imagination. Sister Monica Clare said her first exposure to nuns came in the form of Audrey Hepburn in “The Nun’s Story.”
But so far, visibility has done little to draw in new members. In 2019, 87 percent of Christian women and men committed to a religious life were 60 and older, according to the Center for Applied Research in the Apostolate at Georgetown University. TikTok, which last year announced it had an active global user base of one billion, could be a new frontier for outreach.


“We’re not all grim old ladies reading the Bible,” Sister Monica Clare said. “We’re not just pious, uptight people. There’s joy and laughter, the full range of human experience. The women in my community are very intelligent, very feisty. They know what they want.”
Her roughly 161,000 followers include former Mennonites, retired police officers, knitters, cat owners, recovering alcoholics, vegetarians, atheists and women married to women. She manages the TikTok account on her own; for Facebook, she gets help from a group called Geeks for God.
About a decade ago, Sister Monica Clare said, convents and monasteries were wary of social media, but they have come to see it as a potentially powerful tool for spreading their message. She noted that in the mid-2000s Roman Catholic nuns started finding wide audiences on YouTube and Myspace. Even Pope Francis has acknowledged that despite all the ways that social media has been used to spread hate and encourage vanity, it can also be used to evangelize.
“They realized it was a great way to demystify what we do,” Sister Monica Clare said.
Like a marketing manager checking in to see if her campaign is consistent with the overall brand identity, she sometimes consults fellow members of an Anglican communications committee. She emphasized that they are sounding boards, not authorities on what she can post.
Her order is much smaller and less hierarchical than the sprawling Daughters of St. Paul, a Roman Catholic order that operates in 51 countries and has its own publishing company. Founded in the early 20th century, the convent creates slick multimedia marketing campaigns and released a self-help book last year, “Millennial Nuns,” with Tiller Press, an imprint of Simon Schuster.


“Our mission in the church is to bring Jesus to the world by using the most modern and efficacious forms of media,” said Sister Chelsea Bethany Davis (), 30, who is part of the community and has more than 189,000 followers. “Because we’re media nuns, I do have a phone. I text my mom, Snapchat my sisters.”


In one video, she shares that she’s struggling to learn Italian. Above her head, the text “Go little rockstar” appears in cartoonish bubble letters like a self-motivational mantra — a reference to a widely misheard lyric from a viral audio by Sales. (The song is called “Pope Is a Rockstar.”)


Sister Lisa Carol Hezmalhalch (), 41, grew up in the San Francisco Bay Area and moved in 2021 to Concho, Ariz., to establish a small farm and new Catholic community. Her videos cover things like cooking (10 pounds of recently picked tomatoes) and convent-appropriate curse words (“dagnabit! profanity!”).
To take a vow of poverty and enter most communities, aspiring sisters must relinquish their possessions and become debt free; she is transparent about the amount of student loan debt she is currently paying off by selling items on eBay.
“There are a lot of people who are curious about worlds that they don’t normally have access to, like mine,” she said of her mostly nonreligious following. “I let people be a fly on the wall in my normal, everyday life.”


Before going on silent retreats, she fields prayer requests from her nearly 143,000 followers. “As exhausting as it is, I’ve prayed for every single one of the commenters by name,” Sister Lisa said. Every day during the holy hour, she prayed for 20 to 50 followers at a time, and more than 1,000 over the course of the retreat. “Sometimes I don’t know their name,” she said. “It’s user16575 saying, ‘pray for me.’ I have no idea who ‘me’ is, but the lord knows.”
Some brands and reality television shows are catching on to their influence. One company sent Sister Monica Clare a big box of yarn (“bring on the yarn! We’ll endorse that for you, no problemo!”). Her convent has also received Salonpas pain-relief patches, Dr. Scholl’s pads and compression socks. “They just send us free products,” she said. “They don’t pay for any endorsements.”
Recently, Sister Lisa was approached by a casting producer in Los Angeles about making a guest appearance on a lip syncing game show. “I like to be entertaining and I like to be the center of attention, which can lend itself to pride,” she said. “The playful side of me loves lip syncing. And the other side of me, the side that wrestles with still being on TikTok, just wants to pray and do my work.” (Her superiors declined the audition on her behalf; one brother said over the phone that the show sounded “gimmicky.”)
Another company wanted to send her a custom portrait. “What am I going to do with a painting of myself?” she said. “I vow poverty.”
Though TikTok has placed new demands on the nuns’ time, the call of religious life takes priority. “Oh golly,” Sister Lisa said abruptly during an interview. “My prayer bell is going off.”